BACK
Hackney In Hot Pursuit 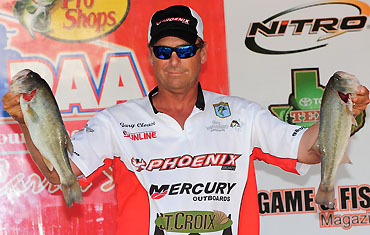 Gary Clouse only gets a handful of weeks per year to be a tournament fisherman, and this year he's made the most of several of them. The Phoenix Boats founder heads into this week's PAA Tournament Series season finale at the Arkansas River sitting atop Angler of the Year (AOY) race.

The 52-year-old, who fished a couple years' worth of Bassmaster Tour events in the late 1980s before stepping away from high-level competition for more than a decade and a half, took over the top slot with a 6th-place showing in the most recent PAA event at Lake Neely Henry in July. He finished 13th in the points last year and qualified for the Toyota Texas Bass Classic, but admitted that he's a bit surprised by his current lofty position.

"There's a bunch of good anglers in the PAA and I feel pretty fortunate," he said. "We'll just have to go out (this week) and see what happens."

The competitor closest to him in the standings is Greg Hackney – a member of his own pro staff. Clouse certainly doesn't expect any concessions from the former tour-level AOY and 2009 Forrest Wood Cup champion just because the latter is on his payroll.

"He's certainly not going to roll over and give it to me. I'll have to earn it, but it'll be fun trying."

Clouse launched his boat company in 2007 after stepping down as president of Stratos a year earlier. Phoenix, which now employs about 45 people, recently completed a move of its headquarters from Tullahoma, Tenn. to a larger facility 12 miles down the road in Winchester.

He's heavily involved in the day-to-day operation of the company, but doesn't fear leaving it behind for a week or so at a time.

"I've got a very good group of people and I know that when I'm away, things will be fine," he said. "To compete at this level, you have to have your mind completely on the game because these guys are tough. If I was worried about the company the whole time, I probably wouldn't do very well.

"I can relax and concentrate on fishing and not worry about what's going on back at the plant."

He's also fished the Bassmaster Southern Opens during each of the past 3 years. To date, his best finish on that circuit was a 33rd last year at Florida's Kissimmee Chain.

He was pretty much a shallow-water power fisherman when he competed on the Bassmaster Tour more than two decades ago, traveling with the likes of Charlie Campbell, Stacey King, Chet Douthit and Howard McCallister (now a Phoenix dealer in Missouri). But recently, he's expanded his horizons on that front.

"Over the last 10 years I've really worked on my offshore game," he said. "I really like that and now I prefer to fish that way, but it's not something I can do all the time.

"I just try to keep myself from getting into too much of a rut. If I can't catch them like I want to, then I have to figure out how I can catch them."

All the Right Moves

Clouse has logged two single-digit placements in the three PAA events this season. He teamed with John Kremer to finish 2nd (behind Bobby Lane and Gerald Brown) at the Toho Team Challenge in January before just missing the Top 5 at Neely Henry.

He was 26th at Old Hickory in May, but the circuit's AOY format allows competitors to throw out one event.

"I feel like I've made better decisions in the tournaments this year," he said. "Everybody out here is pretty good mechanically and everybody can catch them, so it all comes down to decisions and mine have been pretty good, by and large.

"You have to make one every time you start the big motor – whether to go right or left or whatever, and then you have to make decisions about when to move and when to stay. I just feel like I've done better in that department than in years past."

He certainly hopes that trend continues through this week. He said he won't do anything differently than he has all year in an attempt to secure the points crown.

"I thought about that a little bit and I've decided I'll just go out and catch all I can catch. I really need to put that out of my mind and just go fishing, and it'll work out however it's going to work out.

"I'll control the things I can control, like making sure I've got fresh line on my reels and keeping my head right. If I do all those things, I think I'll be okay."