Chapman's Commitment To The Depths Paid Off 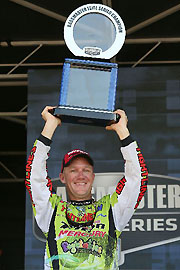 Brent Chapman took the lead on day 2 of the Toledo Bend Bassmaster Elite Series and never relinquished it.

Like a 3-year-old who's yet to take his first swimming lesson, Brent Chapman is much more comfortable in shallow water than deep. But he knew he'd have to get away from the banks at Toledo Bend to have a shot at doing well in last week's Bassmaster Elite Series event.

The Kansas veteran ended up faring extremely well – he logged his first Elite victory and regained the top spot in the Toyota Tundra B.A.S.S. Angler of the Year (AOY) race. He grabbed the lead on day 2 of the event and held it the rest of the way.

Chapman's first day of practice at the big reservoir on the Texas/Louisiana border confirmed his notion that he wouldn't find the type of fish he was looking for in skinny water. He tried some flats and a few humps that contained emergent willow trees and met with no success.

"That was it as far as fishing shallow," he said. "I kept working out deeper and deeper and I finally got out on a ledge and caught a 3-pounder."

The night before practice began, he borrowed a GPS chip for the lake from Randy Howell that was made by Toledo Bend legend Tommy Martin. The chip, which Howell had purchased at a local tackle shop the previous year, proved to be extremely helpful.

"It showed all these roadbeds and bridges that the Navionics chip didn't show. Once I started idling around on some of those places I started seeing these schools of fish and I started catching them pretty good."

He examined more underwater roads and bridges the following day and discovered the locale that he thought would be his primary area after catching a 4-pounder and a bunch of 2 1/2s. But on the final practice day, while running down the lake, he spied a single contour line on the Navionics chip that indicated a point, so he idled on over.

He'd already determined that 25 feet was the depth he needed to focus on, as the thermocline was just a few feet below that. He saw some fish schooling behind him on the top of the point, and then his graph lit up.

"I pulled a spoon out and caught a 4-pounder immediately, and then I threw a swimbait and got a 6 right up to the surface before it got off. Then I moved a little more and fired a jig out there and caught a 6.

"I cut the hook off the spoon and I was getting 10 or 15 bites before I got it back to the boat. I wanted to try to fish around and get more familiar with the area, but at the same time I didn't want to draw any attention to it.

"It's so hard to get excited when you just have a spot and not a pattern," he continued. "When it's just a spot, you expect to have company, but I knew I'd have a shot if I could get that one to myself."

That spot was located just 3 miles from the launch in Many, La.

Chapman's boat was the 78th to leave the launch on the morning of day 1 and he was sure someone would beat him to his spot. To his surprise, there was no one there when he arrived.

He used the big spoon to catch a 13-pound limit in the first hour, and then pulled out to run some other stuff. He came back at about noon, having made no upgrades in the interim, and boxed a 4-pounder and a 3.

"Those bumped me up pretty good and I thought it was a really good start to the tournament," he said.

He caught his biggest sack of the event on day 2 to climb from 11th place to the top of the leaderboard. The early-morning scenario was very similar to when he found the place on the final practice day as he boxed more than 20 pounds in half an hour. It wasn't long before he'd worked his way up to 25.

"I kept weeding through a ton of fish – there was a school of giants in there. I finally started asking myself why I kept hooking them when I already had 25 pounds. The smallest one I had was 4 1/2, and then I lost one that I'm guessing was 6 1/2. It was the only fish I lost all week and I'm glad it didn't come back to haunt me.

"From there I went and tried to find backup places for the next couple days and I ended up weighing in an hour early."

Day 3 wasn't nearly as good, and he has no idea why.

"It was just one of those mysteries of our sport. I had expectations of catching a 30-pound bag, but it sucked. I had that 16-pound limit in the first hour – I got five bites and fortunately I put them all in the boat. The fish were just off that day.

"I backed off Friday when I had 25, and I believe I could've caught more. Next time that happens I'm going to catch every one I can because they never bite that way the next day. I had the same thing happen at Kentucky Lake last year on that spoon." 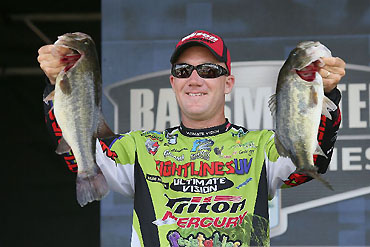 He lost 4 ounces off his lead, but he got that back and then some on the final day. That day didn't begin well either, though.

"I'm still in amazement that I won the thing with the way the day started out. I had about 50 spectator boats with all these people wanting to see an awesome show, and I didn't even have a fish in the boat after the first hour. I thought I was going to blow the tournament.

"I finally caught a 2-pounder on a Carolina rig and a little keeper (spotted bass) on a jig. I had three little keepers and I was just about to bail out. Then I picked up a 3/4-ounce football jig with a Tightlines UV-Hog (trailer) and it was like somebody flipped a switch."

He made a long cast that a 5-pounder took on the fall. Just a few minutes later, another long cast produced a 6 1/2. That second fish wrapped him around a tree and he was somehow able to get it unwrapped by sticking his rod tip in the water.

That was the final fish he caught on that spot. About an hour later, he pulled to a nearby brushy place on the side of a point that Fred Roumbanis had been fishing, and which Roumbanis had told him would be worth a try on the final day. A local angler was there, though, and that guy boated a 4-pounder just as he arrived.

The local gave his consent for Chapman to share the area, and then the local departed shortly thereafter, apparently flustered by all the spectator boats. Chapman caught a 2-pounder and a 3 and then decided to let the place rest while he returned to his primary area. But when he came back a short while later, the local was there again.

He caught a 3 and a 4 off an old bridge to push is weight past the 20-pound mark. Then he went back to Roumbanis' spot and got a 4 to chase the spoon back to the boat. He stopped the spoon when he saw it, and instead of turning away, the fish inhaled the metal and was instantly lifted into the boat.

"When something that crazy happens, maybe you are meant to win."

The spoon was easily the most productive bait for Chapman until the final day. It's his go-to offering when attempting to catch deep fish off of structure.

"It was definitely the bait in practice," he said. "I could throw a Carolina rig and catch a keeper here or there, but the spoon gets the big fish fired up the easiest.

"I'd make short casts with it and hop it with the rod, like stroking a jig or whatever. It's an amazing bait as far as the variety of species it'll catch. I caught catfish, white bass, a striper, a bunch of drum and a 3-inch bluegill."

> He swapped out the stock hooks on the spoon for 2/0 Eagle Claw Lazer Sharp trebles with larger barbs. "Out of all those fish I hooked, I only lose one the entire week," he said.

> "I truly believe that putting that UV-Hog on the back and making it a bulkier bait is what got those bigger fish to bite," he said.

> Main factor in his success – "Committing to fishing deep. It was probably the first tournament in my career where I didn't go and beat the bank at least a little bit, and that was hard not to do because it was so beautiful up shallow."

> Performance edge – "Definitely my Lowrance HDS 10s with the StructureScan. I could pick those areas apart and find the schools of fish." 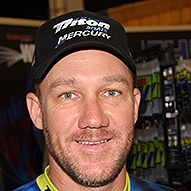