Bladed Jigs, Plastics Were Effective In The Grass 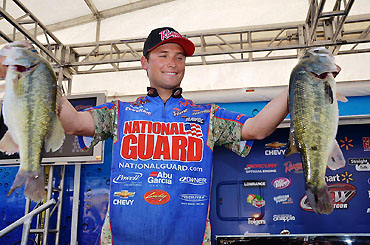 Justin Lucas rallied from 90th place after day 1 to come within 3 ounces of victory.

Even when the grass at the Potomac River is having an off year, it's still the easiest route to a high finish in a tour-level event there. The main key to faring well at the recent FLW Tour Major was being in the right place on the right milfoil bed at the optimal time – when the tide and other factors put the quality fish in a biting mode.

Winner Scott Martin focused exclusively on grass. A couple of the other Top 5 finishers spent some time fishing hard-cover, but the bulk of their work was done in and around the milfoil.

Justin Lucas dug himself a big hole with a 12 1/2-pound bag on day 1, and then very nearly dug himself all the way out of it. His daily progression in the standings went from 90th to 20th to 5th to 2nd and he ended up just 3 ounces shy of Martin's winning total.

His big sack on day 2 came from the grass in Mattawoman Creek after he'd wisely abandoned his day-1 area. He was crowded out of the Mattawoman locale by a local tournament on day 3, so he spent the final 2 days in a small bay just off the main channel that saw relatively light pressure during the event.

He got most of his fish pitching a Berkley Havoc Pit Boss and picked up a few on a swimjig and a soft stickbait.

> He shortened the Grass Pig by cutting off part of the head and also dipped the tail in chartreuse dye.

Main factor in his success – "It was definitely on day 2 when I left the area I'd fished on day 1 and went and found new water."

Performance edge – "That Powell rod. It's not real stiff and it has a parabolic action. I had four of them and I could use them to throw anything I wanted." 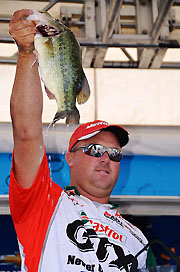 
David Dudley came within a pound of winning his second straight Tour event.

David Dudley, who took over the No. 1 slot in the BassFan World Rankings this week, came within a pound of notching his second straight Tour win – a feat that has never been accomplished. He now leads the Angler of the Year (AOY) race in a quest for a second straight title and third of his career.

He has a long history on the Potomac and fished nothing but grass for the first 3 days. He started on some wood on the morning of day 4 when the tide was at its highest, and then went to the milfoil and culled everything he had.

"I think a few of my fish were spawners, but I'd venture to say that most of them had already spawned," he said. "Probably 75 percent of them looked that way.

"They live in those places – they don't go anywhere. They go through their whole year-cycle in the same grassbed.

His approach consisted of a combination of throwing a bladed jig and flipping.

Main factor in his success – "You've got to be mentally tough on these kinds of fisheries to make the right decisions on the water."

Performance edge – "Having the Rocket Craw on the back of my bladed jig was key. It allowed me to go through high-pressured areas and outfish people who'd been there before me." 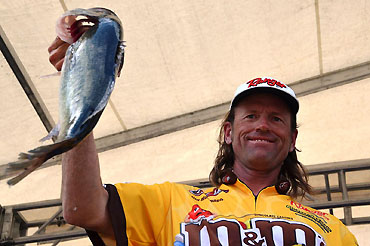 
Jim Moynagh's 4th-place finish moved him up to 3rd in the points race.

Jim Moynagh, another angler who's in serious contention for the AOY, stayed in the grass from start to finish.

"It's funny, you hear about guys catching fish on the Potomac on pilings and this and that, but I never caught a single fish in practice on any sort of piling," he said.

He had a half-dozen or so grassbeds to begin with, but eventually narrowed that list down to the three that were harboring the best quality.

"I quit wasting time in places where the upside was a 3 1/2-pounder – I wanted the upside to be 6-pounders. That wasn't a whole lot of water and I really picked it apart.

"Success in this sport is the accumulation of many small details. On day 1 I caught all of my weight on a swimming worm, and then on day 2 it changed to more of a jig bite. I learned that by watching my co-angler, who was catching an equal number of fish as me, but bigger ones. I caught a couple of good ones that day, and then I fished the jig 75 percent of the time on day 3 and day 4."

Main factor in his success – "Fishing the jig most of the time on the last 2 days."

Performance edge – "I'd say having the automatic anchors. For shallow grass-fishing they're important because they allow you to settle into an area without making a whole lot of commotion." 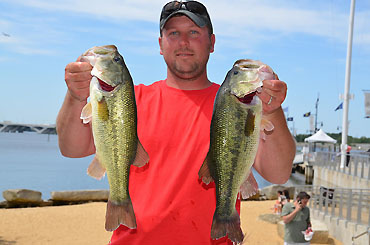 
Rookie Colby Schrumpf's 5th-place finish was by far his best to date.

"I mostly settled into one area about 5 miles from the ramp that covered several acres. There were a lot of laydowns in there and some deep water adjacent to the shallow cover the fish were using.

"The deeper water was 6 feet and the fish were in anywhere from 1 to 3 feet, and they moved with the tides. Low tide was definitely better – that's when I caught my bigger fish."

A Zoom finesse worm enticed the majority of his bites, which were frequent (he averaged about 25 keepers per day).

> He caught a few dock fish on day 2 on a 5/16-ounce Jewel Eakins jig (black/blue) with a Zoom craw trailer (black/blue).

Main factor in his success – "Basically having my area to myself."

Performance edge – "I caught a lot of fish, so it was probably a culling beam."