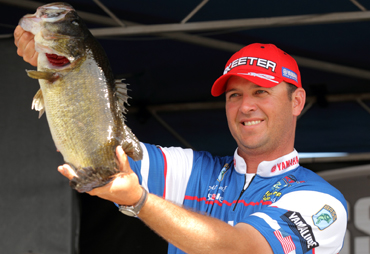 Todd Faircloth threw both a stick bait and creature bait to catch his fish in Lake George.

Despite the drop-off in volume of quality bed-fish compared to last year's St. Johns River Bassmaster Elite Series, there were enough fish up shallow for lookers to dominate this year's tournament. While winner Alton Jones exclusively targeted the big females that remained on beds, the top finishers did mix in some blind casting after their bedding waypoints were exhausted.

Following is a rundown of how Jones' closest pursuers went about their business.

Todd Faircloth spent his entire practice and tournament in Lake George, going off of what he learned last year when he finished 4th at the St. Johns. His pattern focused on where the eelgrass and dollar pads met and he blind-casted to holes in the grass.

"Right where they met on the inside is where I caught the biggest majority of my fish," he added.

He boxed early limits, then picked over beds for upgrades on days 1 and 2, including an 8-15 brute on day 2 that lifted him into the Top 5. He migrated away from bed-fishing the final 2 days and focused on a vast area on the east side of George that he found in practice that saw virtually no pressure all week.

"The water had cleaned up and there were a lot of fish there," he said. "The water was a little deeper, but the fish were still on beds. I had my mind made up after (day 3) that I was going to camp on that spot. It was a real big area and there was no doubt in my mind the winning fish were there."

> Main factor in his success – "Spending all of my time in one lake and really learning it and being thorough. I think my past knowledge of fishing down there last year helped as well."

> Performance edge – "It all pays dividends whenever you're doing that kind of fishing, from the rods to the Spiderwire to the reels. It all makes a difference." 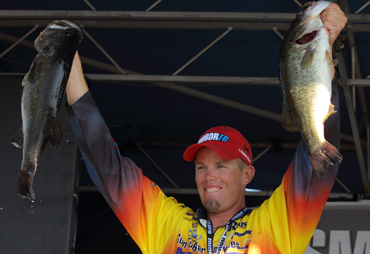 
Stickbaits were the bait of choice for Keith Combs.

Keith Combs came to the St. Johns with the notion that a spawning pattern wouldn't hold up. He didn’t want to sight-fish so he spent the majority of his practice exploring post-spawn possibilities and later called it one of the worst practice periods of his young career.

After not liking what he had in Lake George, he made the 2-hour run south to Lake Woodruff, and that wound up being his best move.

“I went down there the last day of practice figuring if there are a few spawners, maybe they’re down south,” he said. “I got bit, but it was bad day for sight-fishing.”

After weighing 12-06 out of George on day 1, he focused on a creek arm off of Woodruff the final 3 days and was the only pro to weigh progressively bigger bags all 4 days of the tournament. Most of his fish came out of water that was 3 to 5 feet deep.

"They wanted a stickbait," he said. "Some of the fish that were hard to catch, I went through three or four different baits and they would hardly look at anything else, but that Shim-E-Stick was the preferred deal."

> He caught some fish on a dropshot rig with the same bait.

> Main factor in his success – "I've never made a 2-hour run before, so making the decision was pivotal."

> Performance edge – "I'm running that Yamaha SHO and I'm running with an ethanol treatment called Biobor. I like to think that that stuff got me down there and back smooth. I'm very proud of my equipment because you're thinking about it the whole way down there." 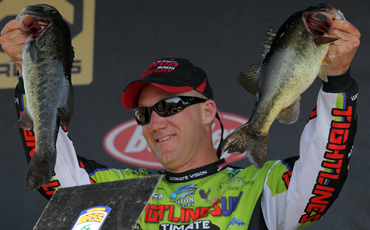 
Brent Chapman changed weights when the wind picked up.

By virtue of his win at the Lewisville Central Open, Brent Chapman has a provisional berth in next year's Bassmaster Classic locked up, so he entered the Elite Series season knowing he could take a few risks. At the St. Johns, he knew of some places in George that would be productive, but he wanted to "look at something off the wall," so he spent some time in Woodruff and got the bites he knew could sustain him through the tournament.

"I figured if I could go down there and do that in 3 or 4 hours in the tournament, I'm liable to have a really good tournament," he said. "I knew it wouldn't have near the pressure that George would. Combs or I should've had a shot at winning it, but I just had a bad day 3 and I don't think he went down there the first day. The fish to win it were there. "

He caught the majority of his fish blind-casting a stickbait to holes in areas that had dollar pads, eelgrass and coontail moss. He also got two key bites off a spot near takeoff that he'd discovered during practice before last year's event.

> He also flipped the UVenko weightless, depending on the wind and water depth.

> Main factor in his success – "My confidence in the UV plastics. I really feel like they helped me get a few extra bites. Especially, in a place like Florida were these fish get so acclimated to plastics, our UV-enhancement of the bait makes them stand out a little more and I tend to get a few more bites."

> Performance edge – "Besides my boat and motor, the other two keys, by far, were my Power-Poles and my Costa Del Mar sunglasses. Being able to see, especially in Woodruff where the water was dirtier than George, was really important." 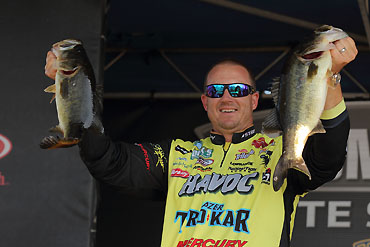 
Skeet Reese threw a new Berkley Havoc bait to catch his fish over the final 3 days.

Skeet Reese was the only top finisher who targeted main-river fish.

"I was trying to find new water," he said. "I felt like with the spring being warm the way it has been I knew the fish had been spawning down here for quite a while. So I chose to look for fish that were spawning later. My gameplan was to go hunting and exploring in an attempt to find fish nobody else was fishing."

The plan paid off as the 2009 Bassmaster Classic Champion consistently weighed in the mid-teens each day. On days 2, 3, and 4, he caught all of his fish by casting a new Berkley Havoc bait called the Rocket Craw. It was designed by Scott Suggs and should hit the market this summer.

"I focused on main-river stuff that the fish would be spawning on last," he added. "I realized that you can't get stuck on one spot or area or just be doing one thing because the fish here move too much. I've never seen fish leave as fast as they do here. It's crazy."

He had a handful of spots that produced and he rotated where he started each day.

> Main factor in his success – "The bait was a key. I was using a wide-gap hook and I was losing fish and it's pretty common that when fish get on beds, they bite funny. So I switched to the straight-shank TK130 and that made a big difference as far as pulling the fish off of beds."

> Performance edge – "All of my equipment. One doesn’t go without the other."