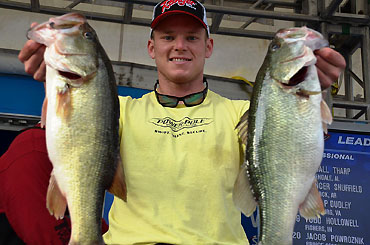 Micah Frazier caught all of his weigh-in fish on a single bait.

The Alabama Rig (and its various knockoffs) wasn't as big of a factor at the Hartwell FLW Tour Major as many had thought it would be. Winner Brent Ehrler caught a few weigh-in fish on Picasso's umbrella-style offering and 4th-place finisher Todd Auten brought in one that fell for the original A-Rig, but that was it for the anglers who finished among the Top 5.

Following is a rundown of how Ehrler's closest pursuers went about their business.

Second-year pro Micah Frazier of Georgia fished the same creek with the same bait throughout the entire event. His final-day sack, which contained an 8-pounder, was the biggest of the tournament.

He focused on transition banks in Six and Twenty Creek and caught all of his weigh-in fish on a No. 8 Rapala Shad Rap.

"It was best if (the banks) had something like a creek-channel bend," he said. "On the flatter banks, I'd look for areas that had some rock or something that was a little different.

"The fish were way shallow – that big one was right up next to the bank in about a foot and a half of water."

He spent a bit of time flipping docks with a jig trailed by a NetBait Paca Chunk.

> Main factor in his success – "Each morning to start the day, I'd figure out what the fish were doing different that day." 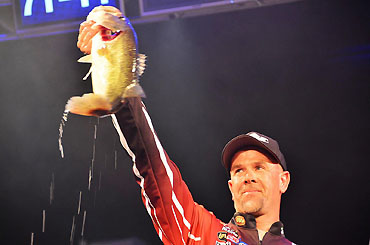 
Marty Stone fished shallow water with a variety of baits.

Marty Stone, who's on the comeback trail this year after leaving the Bassmaster Elite Series upon the conclusion of the 2010 season, turned in his highest finish in a tour-level event since 2004. He pounded shallow-water locales with several different baits, but a spinnerbait was his primary offering and he plied it mainly around docks, with most of his action occurring in the afternoon.

He didn't use the A-Rig at all during the tournament, but he said that it nonetheless played a role for him.

"So many people are throwing it nowadays that those fish against the bank aren't getting messed with nearly as much as they used to," he said. "Out of 163 anglers, not many were running the bank. Everybody was throwing it in practice, and I did, too.

"It's one of the greatest things that's ever happened to a bank-fisherman."

> Main factor in his success – "I was able to keep my composure when I had nothing in the well at noon on both the first and the fourth days."

> Performance edge – "It really comes down to getting comfortable with all my equipment again. Hopefully this was the first step in a long journey." 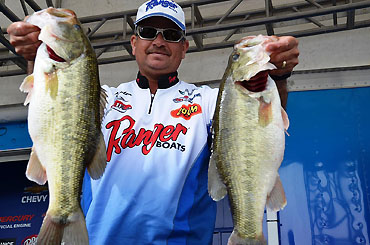 
Stained water was the key to Todd Auten's pattern.

Todd Auten's pattern centered around docks sitting in stained water. He exploited some in Six and Twenty Creek, some in Beaver Dam Creek and others in small pockets and creeks up the Tugaloo River.

He threw a vibrating jig for fish that were as shallow as 1 foot or as deep as 18.

"I think they were staging on some of those deeper docks, just sitting there and waiting until everything gets right (for the spawn)," he said. "A lot of the bigger fish would come from the same places – you could fish two docks in a row and catch two big ones, and then go 3 hours without a bite.

"On the deepest docks they were suspended right underneath them and they'd hit the bait just a couple feet under the surface."

> He also caught two weigh-in fish on a 1/2-ounce Shooter jig (crawdaddy) with a Zoom Speed Craw trailer and one on an Alabama Rig.

> Main factor in his success – "The rain we got a few days before the tournament. They usually won't hit a vibrating jig too good in clear water, and that's one of my strong points – it helps my confidence when I can throw it. I could've thrown a jerkbait, but you can't use real heavy line with them, and I was pulling some of those fish out of boat lifts and things like that."

> Performance edge – "My (Ranger) boat and (Yamaha) motor. Yamaha doesn't sponsor me, but I've loved that SHO ever since I started running it." 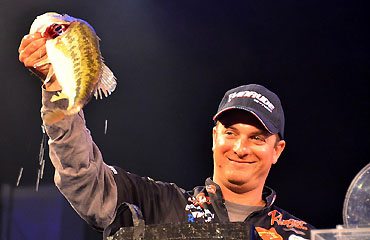 
Anthony Gagliardi compiled almost all of his weight from a single area.

Anthony Gagliardi compiled the vast majority of his weight from a single area. It was adjacent to a spawning flat and featured a road bed, a ditch and a rounded shoal point.

"One thing that helped me was not having to make the same cast over and over again, because something like that usually won't hold up," he said. "Those fish were constantly moving, and me moving with them allowed it to hold up."

He caught two quality fish on day 2 on a Buckeye Suspend Blade and a good one on the final day on a Little Creeper All American Trash Fish swimbait. The other 17 he weighed in came on a Buckeye Spot Remover jighead with a Senko attached.

> Main factor in his success – "Sticking with that one place. I always caught a decent limit pretty fast every day."

> Performance edge – "My Humminbird electronics. I wasn't looking for schools of fish, but individuals. I could move around in the area and when I saw something I thought was a bass, I could drag a bait behind me or cast to it."