BACK
Works With Special-Needs Kids

Simonton To Transition From Teacher To Tour Pro 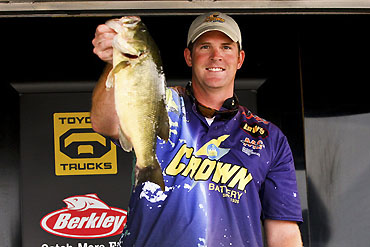 Michael Simonton won the Northern Open points title thanks to a 2nd-place finish in the finale at Oneida.

Every year a dozen or so guys give up steady jobs to experience the extremely unstable existence of a rookie professional bass fisherman. Some of those jobs are a lot easier to walk away from than others.

Michael Simonton, an Ohioan who'll compete on the Bassmaster Elite Series next year, will have a hard time leaving his regular gig. Not because it pays him a ton of money – it doesn't. But rather because he forms strong bonds with the people he works with every day.

He teaches special-education classes at the 7th- and 8th-grade levels at a school in Sandusky. He's hoping to get an extended leave of absence for the second half of the 2011-12 school year to try his hand on the Elite Series, and then decide late next summer whether to return to the classroom for 2012-13 or stay with fishing.

If he isn't granted the leave, then he'll reluctantly resign from his position. This is the second straight year the 31-year-old has earned an invitation to the Elites via the Northern Opens (he won the points title this year), and he won't turn it down again.

"Last year I passed for financial reasons, and now it's like a lifetime opportunity has happened twice for me," he said. "It's what I've really wanted to do since I was in the 3rd or 4th grade – I love the outdoors and I love fishing."

Simonton said that B.A.S.S.'s decision to require less Elite Series deposit money prior to the first event in 2012 has allowed him to advance to the sport's highest level. Crown Battery, his primary sponsor and a company based in his hometown of Fremont, was more willing to ante up after the deposit schedule became more spread out.

He's thrilled that he'll get the opportunity to compete against many of the best anglers in the world and get a shot at qualifying for the Bassmaster Classic, but at the same time, it'll be hard to leave his teaching job and the special-needs kids he's grown so close to.

He's been pursuing a master's degree from Bowling Green University that would allow him to work with children with the most extreme disabilities. He didn't sign up for classes this semester in the hope that it would given him additional time to seek out sponsors in case he qualified for the Elites again, and the gamble paid off in that regard.

"I'm really going to miss it because it's a very rewarding job," he said. "I don't like the paperwork aspect of it, I can tell you that, but I love working with the kids and seeing them grow. If I'm successful with fishing, I'm going to try to start up an organization so I'll still be able to work with them in the off-season."

Simonton has made the money in every Northern Open he's ever fished – three this year, three last year and one in 2009. His best finish was his most recent – a runner-up showing at Oneida that moved him to the top of the points list after beginning the derby in 7th place.

If Elite Series pro Ish Monroe hadn't jackpotted the event and won it, he'd have also garnered a 2012 Classic slot.

He lives 20 minutes from Lake Erie, but ironically doesn't care much for smallmouths or fishing deep structure.

"I'm more of a power-fisherman – I like throwing squarebills and spinnerbaits and ChatterBaits and flipping. Shallow grass is my favorite and I love throwing a frog on the mats. If I can get in a place that's got some largemouths, I can usually do a lot better.

"I'm good buddies with (Erie ace) Joe Balog and he's helped me quite a bit, but I'm still not good at reading that graph. I think some people are just wired that way – they can't get it. I'm better than I used to be, but I'd way rather go down a shoreline and stare at stuff."

He has little experience fishing in the southern part of the country, but thinks his "largemouth mentality" will help overcome some of that. He's eager to learn all the intricacies of being a tour pro, including the required on-water etiquette.

"I'm curious about things like sharing water with four or five guys and establishing who's got what. It'll be a new experience for me and I'll probably feel like I need to move.

"I'm super-easygoing and I'm not going to let something like that change my character."