A-Rig Was Ubiquitous Over The Weekend 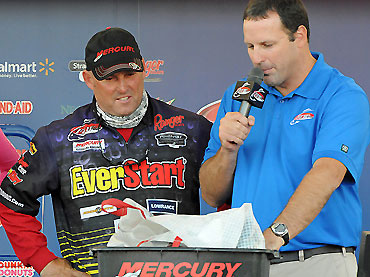 Most top finishers at the Guntersville FLW Tour Open used swimbaits on their Alabama Rigs, but runner-up Robert Behrle opted for grubs.

It's safe to assume that less than 10% of the 146 anglers who hit the water Thursday for the Guntersville FLW Tour Open threw the Alabama Rig that day. When the tournament concluded 3 days later with just 10 competitors, every single one of them was throwing it.

Lots of professional tournaments have been dominated

by a single bait (or at least a single type of bait), but not to this extent. If you didn't have an A-Rig, you couldn't compete at G'ville last week. It truly was that simple.

Paul Elias, one of the few competitors to key in on the new umbrella-type bait during practice, blew away the field by more than 17 pounds with a 4-day total of 102-08. Nobody gave him a run for the $100,000 top prize, but here are some pattern specifics for the four anglers who came the closest.

Robert Behrle, an excavation contractor from Hoover, Ala., has never fished either of the major tours. He competed in three of the four FLW Tour Opens this year after fishing the Eastern FLW Series (a circuit that basically became the Opens) in 2010.

He threw the A-Rig throughout the week and, like Elias, fished it deeper than most. One of his two primary locales was a stump-laden ledge along a creek channel where the fish were down in 15 to 20 feet of water.

"It was devoid of grass, but there was some grass within 100 yards," he said. "The real key was the wind was blowing that (direction) the first 2 days and it blew the shad in there. The bass just followed them."

Whereas most competitors loaded up the A-Rig with small swimbaits, he used 3 1/2-inch grubs.

Main factor in his success – "Fishing deep and slow."

Performance edge – "It was the Alabama Rig. I've had one for a couple of months now, but I hadn't been doing a lot of local fishing. Guys were asking me about it and I was telling them I didn't know very much. I knew I was going to throw it in this tournament, but I didn't know it was going to be like this." 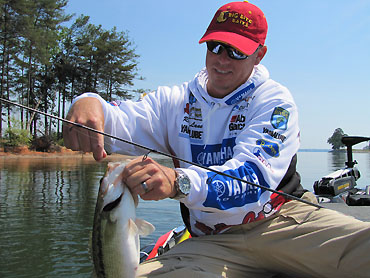 
Russ Lane caught more than 44 pounds over the final 2 days after switching to the Alabama Rig.

Russ Lane did a super job of keeping himself in the game without throwing the A-Rig over the first 2 days. But when his 30-pound total at the midway point was only slightly more than half of Elias', he pleaded with his roommate to give him one of the contraptions.

He weighed a little more than 44 pounds over the weekend.

"The first 2 days I threw my Spro Big Daddy crank and I just couldn't get many bites," he said. "Those fish were suspended 5 or 6 feet off the bottom and it was really hard to make them react to a crankbait. It was taking all day to catch a limit.

"Then Paul gives me one of those crazy rigs and I caught 40 fish (on day 3) and 59 (on day 4) in the same places where I was struggling to catch a limit. We've definitely got a new weapon to use on suspended fish."

His best area was where the river channel connected with a causeway. Another key locale was a pocket with hydrilla that was protected from the north wind.

Main factor in his success – "Begging Paul to give me one of the rigs."

Performance edge – "The Alabama Rig, for sure. The bites on that thing were just ferocious. I'd never felt bites like that – you could tell those fish were completely fooled. I can think of a lot of tournaments where I wish I'd had it and there's going to be more of them won on that thing, no doubt." 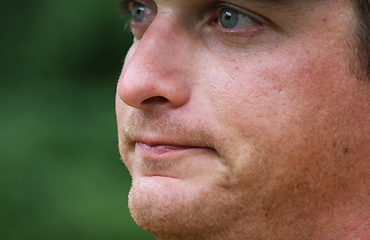 
Anthony Gagliardi's 24-09 bag was the biggest of the final day.

The weight of Anthony Gagliardi's bags increased by at least 3 pounds each day as he became more familiar with the A-Rig and where to throw it. His lack of knowledge about its full potential led to a tactical error on day 1, when he caught 13 pounds in the first hour and then spent the rest of the day flipping.

"I would've been a lot smarter to have just stuck it out there and caught everything I could catch," he said. "As the tournament went on I started fishing fewer places and spending more time in the places that had the better fish.

"The best places were the ones that had the biggest concentrations of the really big shad – 4-inchers and even 5-inchers sometimes. When you found that, you got into the kind of (bass) you were looking for."

His final-day sack was the biggest in the field and the third largest of the former FLW Tour Angler of the Year's competitive career.

"Fall's the toughest time to catch big bags, so that's saying something. (The A-Rig) is definitely something I'm going to keep in my arsenal for quite a while.

"One of the best things about that umbrella rig with five heads was it kind of forced you to fish places where the quality fish were. If you got up in the grass it was a pain to work through, so you had to back out a little more and that put you where the fish are right now. It forced you to fish in the right zone."

> He glued the swimbaits to the flat side of the J-Will head and said he never lost one.

Main factor in his success – "Being smart enough to pick up the Alabama Rig in the first place."

Performance edge – "That's a no-brainer – it was the Rig. It was definitely one of those times when the fish wanted a particular bait." 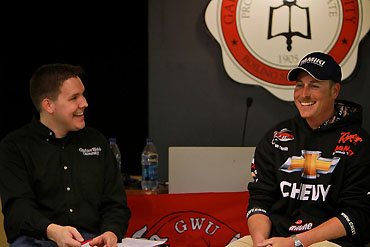 Bryan Thrift was another angler whose bags got heavier with each successive day. Like Lane, he started out with a crankbait and caught a decent limit on it the first day, but ended up culling every one of those fish with the A-Rig.

"I've had one since the Pickwick tournament back in July," he said. "I had it with me in the boat and I knew Gagliardi and a couple of other guys were throwing it on the first day, but I don't think a lot of guys were using it in practice other than (Elias).

"One spot accounted for all of my weigh-in fish except for four," he continued. "It was pretty much a grass flat that was 8 or 9 feet deep, and it had a drain running through it."

> He also caught a couple of weigh-in fish flipping a Damiki Air Craw (watermelon candy) on a 1 1/4-ounce weight.

Main factor in his success – "I spent a lot of time in practice trying to find fish that were related to bait instead of just flipping or throwing a frog."

Performance edge – "The 7-foot Damiki cranking rod is my favorite rod in the world."