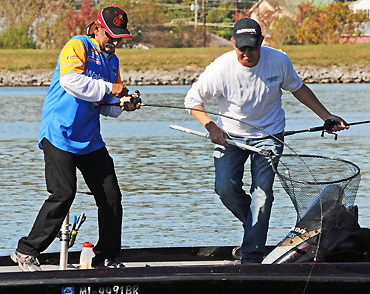 This was a familiar sight at the Guntersville FLW Tour Open: Paul Elias' rod severely bent and his co-angler (in this instance Casey Martin) grabbing the net.

Just about everybody who threw the newfangled Alabama Rig at the Guntersville FLW Tour Open had success with it. Nobody used it as effectively as Paul Elias, though.

The grizzled veteran, who won the Bassmaster Classic during Ronald Reagan's first term as President, had been intrigued by the umbrella-style device's potential since

seeing it for the first time over the summer. The big G'ville bass, which had been playing hard-to-get for months, made him a believer during practice. The rest is now bass-fishing history, and there's no telling what the future might hold.

Elias shocked everybody – fellow competitors and observers alike – with a 26-pound bag on day 1, and then came in 3 pounds heavier the following day for a 55-pound total at the midway point. Many had previously thought that would be a solid number for the entire event.

He just kept slamming them over the weekend to the tune of another 47 pounds and some change. His 102-08 final tally represented the second-highest mark in FLW Tour history and his margin of victory was a whopping 17 pounds.

Here are some particulars about how he did it.

Elias had tested the A-Rig on the small pond at his home and had come away impressed, but he nonetheless began the practice period at G'ville throwing conventional offerings. Those efforts resulted in very limited success.

The deep bite at G'ville had been off all summer and into the fall, and that kept a lot of the Open competitors in the shallows throughout practice. Ledge-fishing stalwarts such as Mark Rose were unable to get anything going offshore with standard tactics and even other A-Rig users were inclined to stay in water that wasn't much deeper than they were tall.

Elias got the idea to try the A-Rig while passing beneath a bridge, and it quickly produced quality keepers where other baits had failed to entice a single strike. It was game-on from there: He began to use his electronics to find some of those deeper-dwelling, lock-jawed bruisers that had everyone stymied, and the A-Rig allowed him to make a personal connection with them.

With the confidence that he could catch fish anywhere on the lake, he went looking in the places where the 4-plus-pounders – the real difference-makers – were likely to be.

"I think I ended up fishing deeper than most people," he said. "I figured out that a lot of those fish I was seeing on the depthfinder, suspended off of 20 feet out over 30 and 35 feet of water, were bass."

Elias visited three of the eight best places he'd discovered on day 1 and came back with a sack that was nearly 5 pounds heavier than any other in the field. That was despite a late start due to a mechanical issue – he didn't make his first cast until almost 9:00.

The wind blew violently that day in the immediate wake of a cold front that had moved in the previous night and he said the additional movement in the water column may have benefited him. But he went even bigger on day 2, after the wind had laid down, extending his lead to a massive 14 1/2 pounds.

Day 3 didn't start quite so smoothly as he managed just three fish from his starting area, but his culling spot was highly productive and he compiled yet another bulging bag. It added a couple more ounces to his lead and all but secured his first career victory at G'ville.

He had thoughts about making a run at the Tour weight record (106-10 set by Brandon McMillan at Okechobee last winter) to go with his B.A.S.S. mark (132-08 from the 2008 Falcon Bassmaster Elite Series). but opted not to do a lot of running around on the final day after he'd surpassed the 20-pound mark again. Victory was in the bag and he'd get to celebrate with his wife and three of his children, who'd arrived in Guntersville that day to witness his latest moment of glory.

With the belief that current enhanced the appearance of the swimbait-laden A-Rig, Elias spent much of his time near bridges, where the large columns accentuated the water movement. Many of his fish came from high spots around them and rockpiles in front of them. Some key specimens came from places adjacent to a riprap point.

He employed three different sizes of jigheads and, after figuring out the rate of descent for each, employed the countdown method to get them to the desired depth. His rate of retrieve varied from extremely slow to "burning it." 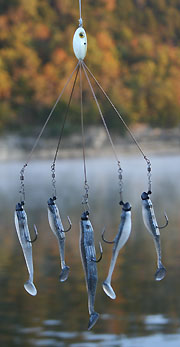 
The Alabama Rig produced for Elias where conventional offerings had failed.

"That was jumbled up so much it was amazing – the real key was the countdown of the bait," he said. "Once I figured out whether the count was 3, 5, 10 or whatever, I'd pay real close attention to that. It changed during the day."

He began practice with what he thought was a sufficient supply of Mann's HardNose swimbaits, but went through more than 30 on day 1 and eventually ran out. He couldn't get more of those locally, so he stocked up on other brands and at times had three different baits on the same rig.

Most of his heads were standard homemade jigs with the skirts and weedguards removed, but he also used some Buckeye J-Will heads.

> He said the heavy rod, line and hooks were of extreme importance because the bait setup sometimes weighed in excess of 5 ounces and there was always the possibility of connecting with more than one good-sized fish on a single cast.

> Main factor in his success – "Figuring out the Alabama Rig on the first day of practice and building confidence in it. I learned a lot about it in practice, and more and more as the tournament went on."

> Performance edge – "The Alabama Rig, for sure. That thing is merciless on bass and it'll be as big or bigger than the ChatterBait or anything new that's come along in a long time. There may be a certain time of year when it's most effective, but it'll work on a lot of lakes. This would've been a real hard tournament to win if everybody had had it." 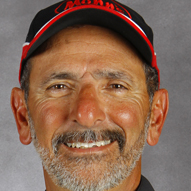