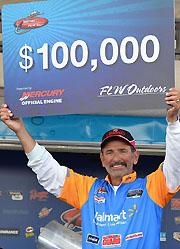 The 2011 Guntersville FLW Tour Open will forever be known as the coming-out party for the Alabama Rig, and 60-year-old Paul Elias will go down as the supreme guest of honor.

The Mississippian, whose long career includes a host of accolades, wrapped up a stunning wire-to-wire victory on Sunday with a 23-00 stringer that gave him a 4-day total of 102-08. In a tournament that many predicted would be a low-weight event – especially for hawg-rich but highly pressured Guntersville – he compiled the second-highest aggregate in Tour history and won by more than 17 pounds.

The biggest question now is how big of an impact the A-Rig, which features five wires extending from a hardbait body to which a quintet of individual baits are attached – will have on the sport.

It's sure to be a big factor in this week's Toyota Texas Bass Classic at Conroe, and there's no way that inventor Andy Poss will be able to keep up with the demand for the contraption he introduced over the summer. For a while, anyway, it'll be deadly on bass that are focused on schooled-up baitfish.

Robert Behrle, who lives 90 minutes from G'ville in Hoover, Ala. and whose tour-level career consists of three Opens that took place this year, caught a 20-06 sack today to finish a distant 2nd with 85-05. Russ Lane, who got his hands on an A-Rig only because he roomed with Elias for this event, weighed 24-05 today for a 3rd-place total of 74-04.

Former FLW Tour Angler of the Year (AOY) Anthony Gagliardi caught a day-best 24-09 for a 74-01 total as he wrapped up a disappointing season with a solid 4th-place finish. Bryan Thrift, another former AOY, concluded an up-and-down campaign on a high note with 22-08 today and a 73-07 total that left him in 5th.

Here are the final numbers for the other anglers who fished today:

The number of anglers who were keyed into the A-Rig when the tournament got underway on Thursday was probably less than a dozen. All who made the final cut threw it today, however, and it continued to produce like nothing that's been seen in quite some time.

Half of them exceeded the 20-pound mark. Just a week ago, many competitors doubted that slumping G'ville would surrender five such sacks during the entire event.

Elias was committed to the Rig from the get-go, and the 2 1/2 practice days he dedicated to finding places to utilize it paid off handsomely. He was able to fine-tune his presentations during that time and for 4 tournament days he hammered big suspended fish that were all but uncatchable by conventional methods.

His final weight is exceeded in FLW Tour annals only by the 106-10 that Brandon McMillan caught at Okeechobee earlier this year. His margin of victory is also the second-highest ever, trailing only Brett Hite's 20-04 at Toho in 2008.

The victory was the eighth of Elias' career and his second on the FLW Tour (he also won at the Atchafalaya Basin in 2003). It occurred on a venue where he'd compiled a lot of high finishes, but never a 1st.

"It feels awesome," he said. "I didn't know if I was ever going to get over that hump before I had to retire. I'd have hated to have ended my career without ever winning on this lake."

He became the first angler to crack the century mark on both major circuits and made a strong run at becoming the 4-day weight record-holder on both. He already owns the B.A.S.S. mark of 132-08, set at Falcon in 2008. 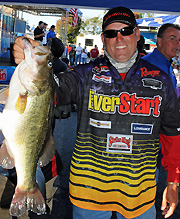 
Robert Behrle was happy with his decision-making throughout the tournament.

"I kind of wanted to break that (FLW Tour) record. I worked my fish pretty good and I had some other places I could've gone, but I would've had to make a long run and I didn't want to do anything stupid when I knew I already had enough to win."

He opted to start at his cull-up spot today, and that proved to be about the only bad call he made all week. He didn't get a bite within 15 minutes, so he went to his usual starting spot and caught four decent fish in an hour.

He returned to the big-fish locale and remained there the rest of the day. His best fish was a 6 1/2-pounder that he'd seen break the surface in pursuit of a gizzard shad near the middle column of the Spring Creek bridge.

"I threw the Rig out there and made about five cranks, and he ate it. That was about a 2 1/2-pound cull there."

Full details of his winning pattern, as well as those for the other top finishers, will be published soon.

Few would've believed a week ago that an 85-pound total wouldn't win this derby, and it was Behrle who ended up with the misfortune of playing second fiddle to a dialed-in veteran prone to catching monster sacks under certain conditions. Nonetheless, he was extremely happy with his performance.

"I made good decisions," he said. "What I did today is going to give me confidence – I went to my best spot and didn't get a bite in 45 minutes, so I pulled out and went to a place where I'd caught a (7-pounder) and a 3 in practice.

"I got seven bites there and the first two came off, and then I caught five in row that (combined to weigh) 17 pounds. Then what makes it especially sweet is I went back to the main area and caught a 5 1/2 off the sweet spot."

This tournament was the only 2011 Open in which he cashed a check. He also went 1 for 4 last year when the circuit was still the Eastern FLW Series.

"That one last year wasn't for 2nd place, though. This was nice."

Although the A-Rig was spawned in – and named after – his home state, Lane wasn't a believer in it when the tournament began. To say that he is now would be a huge understatement. 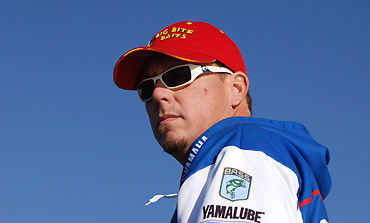 
It's safe to say that Russ Lane no longer looks upon the Alabama Rig as "the stupidest thing ever."

"The very first time I threw it was (day 3)," he said. "I'd heard about it, and to be honest, I thought it was the stupidest thing ever. I think my exact words were that I'd never throw it.

"Then I saw what guys were catching on it and I had to beg Paul to give me one. I really wish I'd had one and thrown it in practice."

He caught nearly 60 fish on it today, most of them 3 pounds or better. The five he weighed were all between 4 1/2 and 5 1/2 and his bag moved him up 4 places in the standings.

"I was really wanting to make a Top 10 and finish the year strong, and I'm pleasantly surprised (to finish) 3rd. I knew I had a good bag, but I didn't think I'd move up that far."

4th: Some Redemption for Gags

Gagliardi had a difficult year (he finished 88th in the Tour points), but it started and ended with strong finishes in Opens (he was 15th at Okeechobee in Feburary).

"I feel good about this, coming off a year that wasn't too hot by my standards or anybody else's," he said. "It's nice to end on a positive note and hopefully I can get my mind right in the off season and come out of the gate on fire next year."

He was one of the few competitors who'd locked in on the A-Rig during practice. He caught more than 30 keepers today, including three in the 5 1/2-pound class. 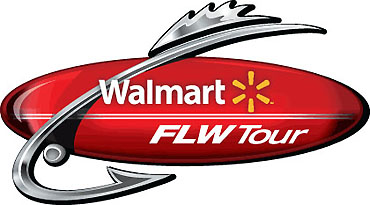 "The first cast I made in the tournament was with the (A-Rig), but I didn't anticipate what ended up happening. After the first morning I knew it was going to be a pretty special deal."

Like Gagliardi, Thrift was hungry for a single-digit placement after a lackluster mid-season and an 83rd at the Champlain Open last month.

He said he caught at least 15 fish today that were within a couple of ounces of 4 pounds on one side or the other. Two came on a single cast and he ended up releasing both.

He didn't throw the A-Rig all day – he spent about 10 minutes chunking a frog on a mat and missed two blow-ups.

"I've never seen a tournament where the fish were so keyed in on one particular presentation like they were here. If you weren't throwing the Alabama Rig, you couldn't compete – no way, no how."

> Shinichi Fukae ended up as the top points-earner from the four Opens. He and the rest of the Top 5 (Dave Lefebre, Glenn Browne, Scott Suggs and David Dudley) earned early berths for the 2012 Forrest Wood Cup. Dudley had already secured a berth by winning the Tour AOY this year.

> BassFan Big Stick Jay Yelas thoroughly enjoyed his initial experience with the A-Rig and his 7th-place finish was his second-best of the year. To read his competition wrapup, click here.