Robinson Cut It Close, But He's Headed For Shreveport 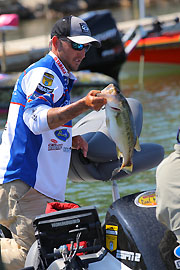 Marty Robinson needed a solid showing in the regular-season finale at Wheeler to qualify for his first Bassmaster Classic.

It took Marty Robinson five seasons to accomplish the goal he set for himself when he launched his Bassmaster Elite Series career in 2007. He'll be among the 54 competitors in the 2012 Bassmaster Classic at the Red River in Louisiana.

It wasn't easy – he had to make the 50-cut in the finale at Lake Wheeler, and then move up a couple of places in the standings on day 3 to get inside the points cutoff, which due to several double-qualifiers eventually fell at 37th place (he ended up 35th). It'll be a thrill for him just to be in the field at the Red, but he also wants to make a good showing for himself.

"A lot of people, when they make their first Classic, go there to take it all in," he said. "I'm going to do that, but I also want to come up with a gameplan and a strategy early on, and then be able to go out and execute that. Hopefully that will lead to a decent finish."

So-So Start, Strong at the End

Robinson put together his best season to date by making five straight 50-cuts to conclude the campaign – easily the longest such streak of his career. His chances of fishing at Shreveport next February didn't look too promising early on as he left Florida with a 48th and a 53rd on his ledger, then followed that up with an 80th-place stinker at Pickwick.

He pulled his act together after that, though, cashing a paycheck at each of the remaining events. His best showing was a 14th at Murray and he had an 18th at Toledo Bend.

A 48th in the second-to-last event at the Arkansas River left him at No. 33 in the points, which made it a good bet that any placement of 50th or better at Wheeler would get him into the Classic. However, quite a few other anglers who were close to the cutoff fared well there, and that forced him to make some hay on day 3 to secure his berth with a 32nd-place finish in the tournament.

"There was a lot more pressure on me for that tournament than any of the others this year," he said. "The way it unfolded, some of the guys I needed to not catch them, did catch them, so the pressure was there until the end.

"My wife was tracking the points the whole time and she was telling me I needed to catch 12 pounds (on day 3). I told her I thought I could catch 10 or so at my first stop and then go from there and try to cull up."

He caught more than 10 pounds, but a dead-fish penalty pulled his bag back under the double-digit mark.

"I was really afraid that was going to come back and haunt me."

Robinson displayed the type of consistency he's been striving for over the latter part of the season. He naturally hopes that trend continues, but he also wants to become more of a presence on tournament leaderboards.

"Obviously I'd like to make consecutive Classics, so I'll be looking to do that next year," he said. "But I'd really like to win a tournament, so I'll start to put more emphasis on that. Now that I've made a Classic, I think I can put a little more emphasis on winning."

Simple survival had been the primary theme for the first few seasons of his pro career. His final placements on the points list after his first 3 campaigns were 64th, 80th and 86th before a minor breakthrough in 2010, when he ended up 43rd and missed the Classic by just a handful of slots.

He owns and operates a plumbing business in Lyman, S.C. and between sponsorships and some of his own money, he's been able to keep his career afloat without jeopardizing his family's security (he and wife Iris have two sons – Marhshall, 7, and Mitchell, 5).

"I enjoy that work. In fact, it's really not like work to me. I'm not somebody who can sit at home twiddling my thumbs. I've got to be doing something to at least keep my mind sharp.

"Hopefully the Classic will be a big step toward getting some more sponsorship money. I'll keep going as long as I can afford to, but I'd like to become a little more financially stable on the fishing side so I can keep doing this from now on." 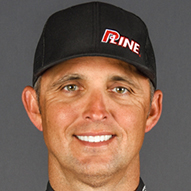