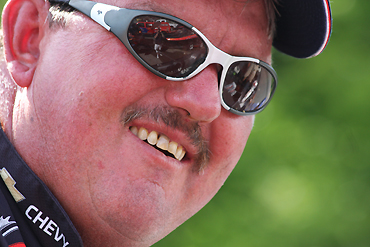 David Fritts was the winner the last time the FLW Tour visited Guntersville and it'd be no shock to see him fare well again.

An FLW Tour regular season that began with the ignominy of a canceled event will conclude this week at one of the country's best fisheries. Alabama's Lake Guntersville in the summertime isn't quite the bass nirvana that it is in the spring, but there are still lots of fish to be caught and some of them are quite large.

The Angler of the Year (AOY) will be determined by the time the tournament concludes, and 4th-year pro Bryan Thrift of North Carolina can add that crown to his burgeoning list of accomplishments with what's become – for him – just an average finish. He holds a 21-point lead over 2nd-place Brent Ehrler, which means that a placement of 21st or better will clinch it. Ehrler, though, has already won twice this season and is no stranger to success here, and a bevy of other competitors could slide into the picture if Thrift drops a rare bomb.

Some Forrest Wood Cup berths will also be decided, although the final cutoff will go much farther down the points list than the guaranteed mark (30th). No less than 19 of the current Top 50 are already in via one of the two FLW Series divisions, as are 11 more who are farther down the ladder.

Guntersville hosted a tour-level event less than 2 months ago when the Bassmaster Elite Series made its near-annual visit. Conditions have changed some over that span, but one fact remains: Daily limits that average at or near 4 pounds per fish will be required to put an angler in serious contention, and fans at the weigh-ins will be treated to some bags in the high 20s.

Before getting into more about the bite, here's more on the lake itself.

The Tour is at Guntersville for the 2nd straight year – the 2009 event was the season opener in February. David Fritts won that one with 38-01 over the final 2 days (until this year, the field at Tour events was cut to the Top 10 after day 2 and weights were zeroed at that point).

While just about everyone in the field focused on the lake's famed grass and threw rattlebaits, Fritts concentrated on rock and caught his fish on the billed baits that are synonymous with his name.

Just a couple of months back, Skeet Reese topped the Bassmaster Elite Series event here with a total that exceeded 100 pounds for 4 days. He used a couple of different crankbaits and a mop jig.

Numerous local derbies are conducted here every weekend, There were reports of at least one 8-pounder and a couple of 7s showing up in a single event last Saturday, along with a bunch of fish in the 5- to 6-pound class.

Doug Campbell, who's guided on the lake for nearly a quarter-century and owns two tackle stores situated on its shores, said the lake is about where it should be for this time of year.

"There's a little bit of everything going on and it's a typical summer pattern," he said. "There's a real good deep-ledge bite, the flipping bite is really picking up and there's some topwater action going on.

"There's more fish out deep on the ledges, but there'll be more guys out there, too, and they might have to divide up the fish. With that being the case, somebody could actually win it flipping a jig."

There's less hydrilla than in normal years due to the flooding and abnormally cold weather that the region experienced this year, but that which is present, along with a fair amount of milfoil, holds fish year-round.

"There's a lot of young hydrilla that's just getting started," Campbell said. "We had enough cold weather and enough current that a lot of it had to start over from the bottom." 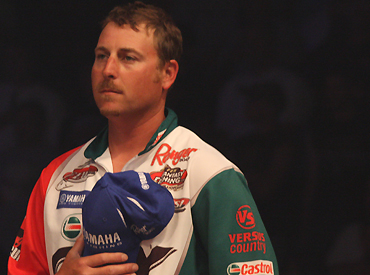 
Bryan Thrift can nail down his first Angler of the Year title with a finish of 21st or better.

Two factors that will almost certainly come into play are crowding and power generation by the Tennessee Valley Authority. With so much angler pressure on the lake, the majority of the best areas have become community holes, and the bite gets considerably tougher if the TVA doesn't pull water until mid-afternoon, which has been the case through the early part of this week.

Here are practice notes from some of the anglers who'll compete this week.

Ish Monroe
"Things have changed since we (the Elite Series) were here last month. I would say it's not as good, but everybody's still going to catch a limit. You can catch a lot up shallow, but they're going to weigh 12 to 14 pounds and that's not going to get you a check. I'm fishing to win, so I'm fishing offshore.

"There's fish in the grass and fish on the ledges. I'm going to fish a lot of different stuff and try to catch a 5-pounder here and a 5-pounder there and try to get up to 25 pounds."

Steve Kennedy
"It doesn't seem like there's as many fish out deep as (at this time of year) before. Maybe they've been beat up by all the tournaments.

"Before I had two or three places where I could catch them every cast, but I haven't found that this time. I'm getting enough bites to keep at it, but I haven't got it figured out. I don't know whether they've gone up or out."

Randall Tharp
"It's typical Guntersville – it's going to take a lot of weight to win here. Fifteen pounds a day isn't going to get it done. I'm fortunate to know the lake really well and I've got places that I didn't practice on that I save for tournaments like this.

"There really aren't any secrets here anymore, but I know how they act and why they do what they do. I think guys like (Andy) Morgan and myself definitely have an advantage. You can literally catch them any way you want to, but if you're weighing in 3-pounders, you're really going to be backing up."

Bryan Thrift
"My practice wasn't as good as I needed it to be, probably. I was getting some bites, but it didn't seem like the quality was there like it should've been. At Guntersville you've got to be at least halfway on that 4- to 5-pound bite, and I'm not there yet.

"I've got a plan to mix it up both deep and shallow – that's probably what I'll do all 3 days."

Glenn Browne
"It's been kind of mediocre for me. I came here on my way back from Ouachita (prior to the off-limits) and had a great time – they were biting on every ledge you came to. But where I found them before, they're gone and I've had to go to the grass.

"It'll probably be won offshore, but I'm going to do my Florida thing in the grass. I got 40 or 50 flipping bites (Monday)."

Scott Canterbury
"It's been a little tougher than I expected, but it's still pretty good. They're not biting as well as I expected, but you can still grind out a good day.

"I think somebody's going to mix it up to win it – catch some out of the grass and have an offshore bite to go along with it. If everything goes right, I think I can get enough big bites to make a run at it. A lot will depend on getting your timing right with the current. I definitely don't plan to sit on one place all day."

Larry Nixon
"I got 2 days of practice and I did okay, but I'm not on what I'd call a winning deal. I don't know what's going to happen – I've got four or five places where I might catch a big sack, but if they're covered up I could be in trouble. 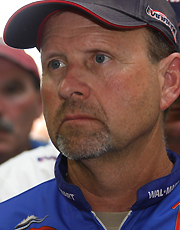 
Veteran George Cochran is always a threat when the weather turns hot.

"There's a lot of different ways to fish, but it's going to be won on (offshore) structure. The shallow guys can contend, but I don't know if it'll hold up for 4 days. It's not near as good as I expected and it seems like the shallow water has more fish than it should."

With the above in mind and more, here are BassFan's recommendations for the Top 10 to watch in this tournament.

1. David Fritts – He's not having a great season, but his record here is outstanding and he has a bit of momentum as he's coming off a 12th-place finish at Ouachita. Very dangerous at this time of year.

2. Bryan Thrift – He's been so good this year that his 21st at Ouachita almost seems like a bomb. Another one here would make him the AOY, no matter what anybody else does.

3. Andy Morgan – He loves this place and has all the tools needed to succeed here. Anything other than his third Top 10 of the campaign will be somewhat of a surprise.

4. David Dudley – He's not yet qualified for the Forrest Wood Cup, but at No. 32 in the points and with a bunch of double-qualifiers already locked in, he should make it if he avoids a bomb this week. He was 3rd the last time the Tour visited this pond and he's an excellent cranker.

5. Brent Ehrler – There's a lot on the line for him here – he could become the first angler to win three FLW Tour events in the same season and could claim his first AOY if Thrift slips at all. Another victory would also tie him with Fritts for the most in Tour history (four).

6. Randall Tharp – Admits that he likely wouldn't be fishing for a living if not for all the money he's won here in lower-level events. This isn't his best time of year, but he's got a lot of hats spread around the lake and some will likely produce rabbits.

7. George Cochran – At 20th in the points, he's bounced back nicely from a lackluster 2009 campaign and he's always a terror in hot weather. Won a springtime Bassmaster Tour event here in 2004.

8. Steve Kennedy – He's already qualified for the next Bassmaster Classic, and now he's primed to punch his ticket for the Forrest Wood Cup. He's had only a couple of finishes inside the Top 20 during this ultra-busy season in which he's been consistent if unspectacular on both tours. A strong offshore angler whose game seems well-suited for this place at this time.

9. Greg Pugh – Another Alabamian with a tremendous amount of experience here at all times of the year. It's been a tale of two seasons for him – two great events to start, followed by two mediocre finishes – and he has a chance to conclude on an extremely high note.

10. Larry Nixon – Little has gone right for him this year, but he's had some good finishes here in the past. He's already Cup-qualified via the 2009 Eastern FLW Series, so he'll be looking to build some momentum for Lanier.

> BassFan Big Stick Jay Yelas got some good bites in practice, but he won't be sure he's on the right fish to contend until competition gets under way. To read his practice report, click here.