Fritts Considered Going Lipless, But Turned To His Staples 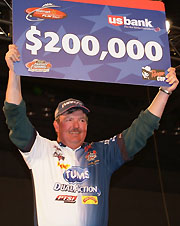 David Fritts' fortunes at the Guntersville FLW Tour took a turn for the better when he switched his focus from grass to rock.

The lipless crankbait bite is so dominant at Lake Guntersville this time of year that even David Fritts, the king of the lipped-bait practitioners, was tempted to go that route during last week's FLW Tour season-opener. Good thing he didn't.

The North Carolinian ended up sticking with what's made him famous in bass-fishing circles over the past two decades – and what's accounted for most of the $2 million he's earned on the water. Instead of focusing on grass like everybody else, he turned his attention to rock and worked it over with two of the Rapala DT Series cranks that he designed.

where the water was still too cold for them to chase a fast-moving lure, and they all added up to his 10th career tour-level victory. It was his fifth FLW Tour triumph and first since 2001, and it came less than 4 months after his win at the Clarks Hill Eastern FLW Series last fall.

He caught nearly 24 pounds on the final day and rallied from 6th place to edge runner-up Sam Newby by 1-01. Here's how he did it.

Fritts and regular practice partner Randy Green threw lipless rattlebaits for the most of the first 3 days of the 4-day official pre-fish session. They didn't have a lot of luck, and it turned out that the only place they discovered that held any promise was the same area that Tom Mann Jr., Mike Surman, Ray Scheide and others would camp on.

"I think the first day we each caught two keepers," he said. "Then the next day it was one and one, and the third day we caught one apiece again."

With his grass action so slow, he decided to see if he could do any better keying on rock. From his many past visits to the lake, he knew of some places that featured either riprap or large boulders – some with grass around and others without. He found quality fish, and he could catch them on the baits he trusts more than any other.

"I was lucky enough to figure out that little something. There were a lot of fish up in about 5 feet of water, but depending on the time of day and how much current was moving, there were a lot between 5 and 10 or 11 feet, too.

"I went to doing what I do best and stuck with the gameplan. Sometimes it took me a hundred casts, changing the angle and doing something a little different every time, but eventually I got them to bite."

Fritts started day 1 on some riprap up near the North Sauty Bridge and caught about 8 keepers that would've given him a sack somewhere in the neighborhood of 17 pounds. He knew a lot of the grass guys would do better than that, so he moved to another rocky area and caught a 5-pounder that replaced a 3.

He went there toward the end of the day and caught 7 1/2-pounders on back-to-back casts with a jig tipped with a Zoom Speed Craw. That put him within a few ounces of 26 pounds, and only David Walker's massive 29-03 sack was bigger that day.

Day 2 started out a bit slower. He went straight to the jig hole and failed to get a bite, so he moved to the bridge spot and banked four mediocre keepers. He finished off his limit and made one cull with two good ones from his other cove spot, and his 19 1/2 pounds for the day and 45-02 total put him in 3rd place as the field was cut to the Top 10.

He described day 3 as "just terrible." It was cloudy, foggy and dark and the Tennessee Valley Authority shut off the current generation.

After going biteless at the jig hole and both creek locations, he headed for the upriver grass spot and found Mann, Surman and a horde of local-tournament competitors there. He foul-hooked a 4-pounder and lost it, and his co-angler caught one keeper there before they headed out.

He was back at the bridge at about noon and caught a 6-pounder. The main-lake jig locale then failed to produce anything again, but the other creek spot gave him twin 4-pounders in the span of three casts in the final hour. He knew he wasn't in great shape, but at least he'd salvaged something.

He started day 4 almost 6 pounds behind leader Scott Canterbury and with five other anglers between him and the pace-setter. He set his sights on another 25-pound bag, and nearly got it.

The current was back, so that was a good sign. He caught a keeper on his 15th cast or so, and then caught fire.

"I can't describe what happened, but I got in a little zone and I was catching them every cast. There were a lot of small ones, like 2 1/2-pounders, but I just kept slowly culling up."

Then he went to a place where he knew there was one big rock and enticed a 6-pounder "on my 101st cast." Then it was off to another stand-alone rock, and an additional 50 or 60 casts produced another 6. Then it was back to the first rock for a 5 1/2.

But when it was time to head for the launch, he still had a 3 1/4-pounder in the well. If he could've replaced it with a 5, that would've given him his 25 pounds.

"I thought sure that was going to be the one that killed me."

Turned out he was wrong about that.


Fritts employed two different colors of Rapala DT Series crankbaits – chartreuse/brown (pictured) and blue shad. He knew it was time to switch each day when a fish pulled free of the brown/chartreuse.

> Fritts threw chartreuse/brown Rapala DT Series crankbaits (either a DT06 or a DT10) in the mornings, then switched to blue shad later in the day.

"Every day I'd eventually lose one on the chartereuse/brown, and then I'd go with the shad pattern and I wouldn't lose anymore," he said. "But (on day 4) the one I lost was a 5- or 6-pounder – it was one I needed.

"I don't know if it had to do with the sun or getting to a certain time of day or the fish just getting used to seeing the brown/chartreuse bait."

> At his main-lake spot, he fished his 3/4-ounce jig very slowly most of the time, but gave it an occasional hop. "With that great big craw with those big arms on it, it vibrates like a dang crankbait. I caught some spotted bass just winding that thing, but they never helped me."

> He also designed the VMC Sure Set hooks employed on the crankbaits, but swapped out the standard No. 4s for No. 6s. "The bait performs a little better, but the main thing is if the fish aren't biting it real good and they're swatting at it, they catch them. I used to think just the opposite, but after many years I've realized that if you downsize the hooks and go with the smaller diameter, (the fish) get hooked easier."

> Main factor in his success – "I think it boiled down to my confidence in a crankbait and what it can do. The Rapala DT is a pretty incredible bait, and the more skill you have, the better they become. I was in my element."

> Performance edge – "For me, it's the whole system – the rod, reel, line, lure and hooks. I preach that total system and talk about it all the time and if people would try it, they'd love it." 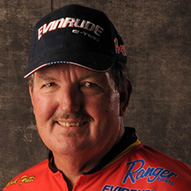