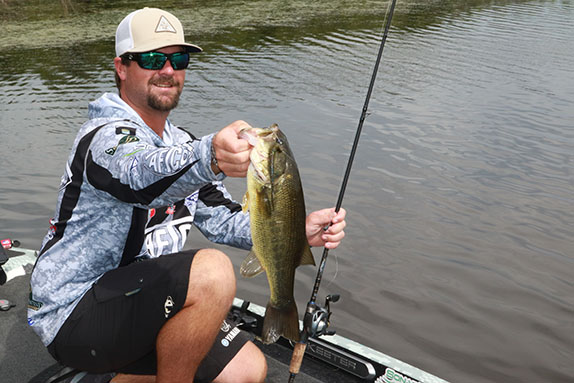 Anytime Drew Cook is on a vegetated fishery, he’ll have a swimming worm tied on.

When an angler falls out of the boat, we call that “going for a swim.” Safe to say, Bassmaster Elite Series competitor Drew Cook tries to avoid such mishaps, but from a bait presentation standpoint, he values the swimming worm technique enough to keep one tied on anytime he’s on a vegetated fishery.

“I think it shines most in places that have grass, especially in tidal fisheries with needlefish,” Cook said. “It’s super easy to fish; you cast, let it sink to the bottom, work it like a regular worm for a few seconds and then swim it back — bumping the grass along the way.”

The general swimming worm technique may employ a boot-tail worm, gator-tail worm or a paddle-tail worm like Cook’s favored Big Bite Baits Tour Swim Worm. The latter’s broad tail generates a lot of thump and features a perforated slit that allows him to open its form for maximum motion.

“In cleaner water where the fish are sight-feeders, I’ll open the tail all the way or maybe partly; but if the water’s dirty, I’ll leave it connected so it gives off more thump,” Cook said. “Either way, I like a swimming worm when I want more action than a straight-tail worm, but not as much as a ribbon-tail worm.” 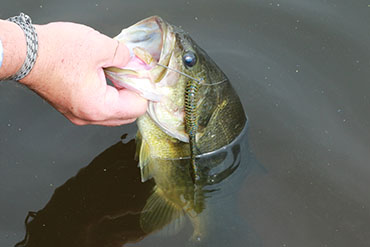 
Cook views the swimming worm as kind of a mid-range action when he wants more than a straight-tail worm, but not as much as a ribbon-tail.

While Cook typically keeps a 5.5- and 7.5-inch Tour Swim rigged and ready, the smaller size handles most of his applications. The larger worm’s bulk helps keep it higher in the water column, while it’s beefier profile tends to weed out smaller fish.

“They each have their time and place,” Cook said. “Like Winyah Bay or the Sabine River, you don’t want to miss an opportunity with that smaller fish because you may need him; while on Okeechobee, there are tons of smaller fish, but you want to find the bigger ones.”

Early in the year, retrieving these baits through barren pad stems is a good way to meet an aggressive pre-spawner, while tracing a laydown or dock can pay off big. Here’s a few of Cook’s favorite swimming-worm tactics.

> Close Contact: Growing up in North Florida, Cook has fished his share of lily pads. Channeling his youth, one of his top modern-day techniques is rigging a swimming worm with a 3/32- or 1/8-ounce bullet weight and skimming it across the top of those broad, flat leaves.

“I like to do this anytime they’re up shallow — especially in the pre-spawn,” Cook said. “It’s pretty much a 4-wheel drive; you can throw it on anything. You can throw it on the bank and reel it off if you want to.

“You can reel it through grass and be really efficient to cover a lot of water, whereas you can’t throw a spinnerbait in really thick grass.”

Similarly, Cook finds a swimming worm excels in the deep eel grass that challenges swimbaits and other presentations on fisheries like Guntersville. From skimming across the tops to yo-yoing deep into the blades, this versatile presentation will catch ‘em in the dense blades.

Notably, Cook will use this same presentation in deep hydrilla that has not reached the surface, or the grass that has died back in late fall.

> Open Water: When he’s covering a broad flat or point, Cook often fishes a swimming worm on a Carolina rig: “A Carolina rig is painful to throw because you’re barely moving it, but that swimming-worm tail is still flapping back and forth. Especially on a sand bar where bass are spawning, it almost looks like a bream up there fanning the sand around with their tails to get at the bass eggs.”

Another open-water presentation finds Cook rigging a swimming worm on a wobble-head. Creeping along the bottom, that tail flaps enticingly. 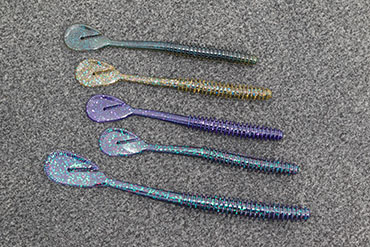 “I’ll also fish a swimming worm in standing timber if the fish are suspended in it,” Cook said. “I’ll throw it out there on a 1/4- to 3/8-ounce weight and get it down to about 8 feet and reel it back. That’s something that can be easily fished through there and it’s not a swimbait — it’s something a little different.”

> Wakeup Call: A very specific presentation, Cook uses this one when fish are schooling. Holding his rod tip high, he’ll keep the bait’s nose up to create a distinct V-wake that mimics a lone baitfish detached from the school. Once a straggler — or the swimming-worm imposter — catches a fish’s eye, it’s game over.

> Second Chances: Cook finds the swimming worm works well as its own follow-up bait. Similar to pitching a Senko to the site of a missed topwater bite, adjusting his swimming-worm retrieve does the same.

“A lot of times, when a bed fish swirls on the bait, you can just kill it and it sinks right down there to them and they eat it,” Cook said.

> One and Done: Don’t hesitate to use the swimming worm to fish occasional targets like stumps, laydowns and holes in the grass. Flip or pitch your swimming worm to a specific spot and that tail swims all the way down for deal-closing appeal.

Cook typically throws his swimming worm on a 7-foot or 7-foot-3 Dobyns Champion rod (shorter in the tight confines of river fisheries) with 16-pound Sunline Shooter fluorocarbon. While he used a traditional round-bend hook for many years, he now uses a Gamakatsu G Finesse Hybrid Worm Hook, which blends the best attributes of a traditional round-bend with an EWG (Extra Wide Gap).

“Most of the time, it feels just like a (normal) worm bite and the line goes slack; half the time, they’re swimming right at you,” Cook said. “If you don’t reel down, there might be 4 feet of slack in the line when you set the hook.

“By the time you get your rod all the way back, you’ve only had a quarter of the hookset; but if you reel up all the slack, you get full hookset. If you slack-line those fish, most of the time, you’ll just skin-hook them and they’ll get off, but if you get a full hookset you’ll catch them.”