BACK
Mentored A Winner 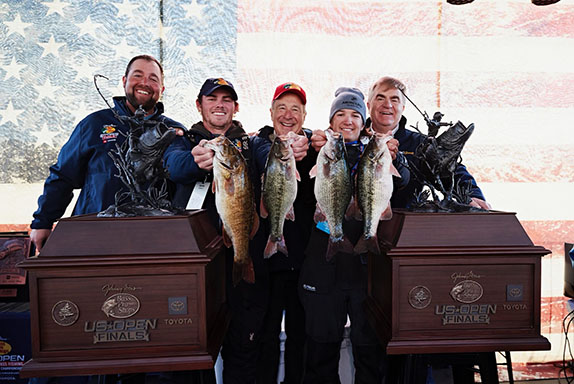 Even before he was one half of the winning team at this week’s Bass Pro Shops US Open National Bass Fishing Amateur Team Championships, Alabama’s Tucker Smith had a distinguished tournament pedigree. While at Briarwood Christian School, he won the Bassmaster High School National Championship three times, paired with a different partner on each occasion. He subsequently joined the venerated Auburn University bass team, and earlier this year he narrowly missed qualifying for the 2022 Bassmaster Classic through the College Classic Bracket.

Most importantly, however, he was closely mentored by the late Aaron Martens, whose daughter Jordan also attended Briarwood Christian.

“Tucker has enormous potential to reach the pinnacle of our sport,” Martens told Mercury’s in-house Dockline publication earlier this year. “Not only is he an intuitive angler, but he’s kind, charismatic and well-spoken.”

Now, like his idol and teacher, he’s won at Table Rock.

Martens' last major victory as a pro was a title at the gem of the Ozarks in May of 2019. For that effort, he won $100,000. Less than a year later he was diagnosed with cancer. In fact, Smith was in the boat with Martens when the latter had his first seizure that indicated the disease’s presence. He took him to the hospital, and after the frightful diagnosis came back the two became even closer.

Smith continued to bask in guidance and instruction from Martens, but also became a caretaker of sorts, ensuring that Martens was safe and able to get on the water as much as his health allowed. Martens passed away earlier this month and the tributes from bass pros and other members of the industry have flowed freely. Today, they continued on the shores of Table Rock.

“Aaron was the one that came from the west with finesse,” said western media personality Kent Brown, who also works for White River Marine Group, while fighting back tears. “Dave Gliebe and Gary Klein had both come east with the flipping stick. Everyone thinks we’re weird anyway, but he was the guy that took our techniques to 'Bubba Land' and beat them.”

“It’s just getting to me talking about it,” said 2014 Bassmaster Classic champion Randy Howell, whose family was close with the Martenses. “There’s no telling how many times they fished together, and for this to happen on Table Rock is extra-meaningful. I’ve known Tucker since he was probably 12 or 13, and his relationship with Aaron was special."

Smith’s partner in this event, Logan Parks, who likewise will get $500,000, a fully-rigged boat and a Toyota truck as part of the prize package, didn’t know Martens quite as well, but through the pair’s ample hours in the truck together got a sense of how much the veteran pro mattered to his team partner. “He would call us on the road on the way to our college tournaments, and you could just tell how great of a guy he was.” Of Martens’ death, he said “it tore (Smith) up real bad.”

After weighing in a little over 13 pounds each of the first two days, good enough for 10th overall on day One and moving them into 8th after day 2, all weights were zeroed out for day 3's one-day showdown. Smith and Parks had one small fish in the livewell at 10 a.m. when they saw birds nearby diving on baitfish. Smith stopped short of calling it divine intervention, but he expressed nothing short of certainty that his mentor was looking out for him. “We caught 15 pounds in 30 minutes and upgraded twice,” he recalled. That final cull was the one that lifted them into the top spot.

Befitting their generation’s embrace of technology, the pair used forward-looking sonar to catch each of the 25 to 30 bass they landed in the finals – a mix of largemouths, smallmouths and spots. “We could see every one that ate our bait,” Smith said. They utilized a Damiki Rig for most of those catches.

“I was throwing a reel this week that (Aaron) gave me, a Shimano Metanium,” Smith said.

How would his notoriously detail-oriented instructor have graded him?

“He would’ve said, ‘Good job, bro,’” Smith answered. “But he definitely also would have made me retie more than I did.”

While Martens never won the Bassmaster Classic, finishing as the runner-up on four separate occasions, he did win the other US Open, held on Lake Mead, three times. That tournament, often referred to as “the Iditarod of bass fishing,” is notoriously grueling, as it was historically held in the heat of the Las Vegas summer.

This week at Table Rock might not have been as physically demanding, but don’t tell that to Smith and Parks. They went from a college event in South Carolina to the BPS US Open Wild Card tournament on Bull Shoals, which left them with a half-day of practice on Table Rock before competing for three days.

When asked how they’d celebrate the seven-figure payday, they expressed a strong interest in sleep. The highly-nocturnal Martens, who often worked on tackle late into the night, would likely approve.