BACK
Only Angler To Top 20 Pounds 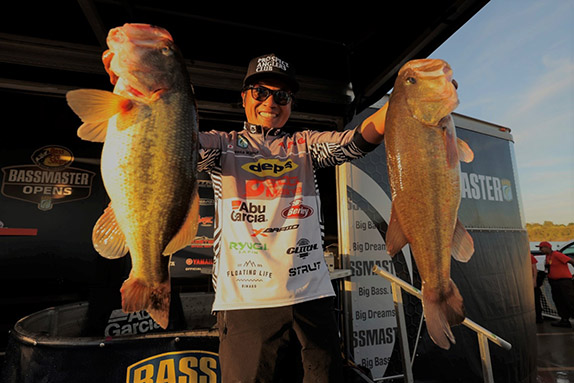 Kenta Kimura will take a 2-13 lead into day 2 at the Grand Lake Bassmaster Central Open.

It was a tale of extremes for Japanese pro Kenta Kimura, whose limit catch of 21-14 led day 1 of the Grand Lake Bassmaster Central Open.

After spending the first half of his day in a painfully unproductive drought, the Bassmaster Elite Series pro shifted gears and tallied a huge second half. Kimura was the only competitor to break the 20-pound mark.

“I had a really good day, but I only had one keeper until 1 o’clock and then I just figured it out,” Kimura said.

Starting his day on the lake’s lower end, Kimura tried to find a big bite offshore. Fishing in about 10 feet of water, he thought he could get a jump on the day by targeting rock structure.

“I didn’t have a good practice, so I just kept looking around,” he said. “I fished all over this lake, up and down, but it just didn’t work out.”

Abandoning his offshore ambitions, Kimura switched to a shallower game. He spent the final hours of his day rotating between various hard targets.

“I fished docks, rock and wood,” he said. “I got them on a little bit of everything. I was mainly looking for baitfish, but sometimes I couldn’t see it on my Garmin LiveScope because the spot was so shallow.”

Continuing the premise of extreme differences, Kimura said he caught his fish on fast-moving reaction baits and slow presentations. He kept his bait specifics confidential but said his slow presentations included a specialized Japanese technique.

“I would take almost 20 minutes on each cast,” he said.

Kimura said he often tried both presentation styles on the same spot. His strategy was to show the fish multiple looks.

“I caught my biggest one by fishing really slow and my second-largest one on a reaction bait,” Kimura said. “It really didn’t matter, I was just trying to fish each spot the way I know how.”

Kimura fished in the last of 18 flights Thursday. With the take-off order reversing for day 2, he said he’s hoping he can get the ball rolling early.

“I really don’t know what I’m going to do tomorrow, I’m probably going back to where I caught them,” he said. “It looks like I’m going to have a short day, so I’ll really have to think about it.”

John Soukup of Sapulpa, Okla., is in 2nd place with 19-01. Noting that he started his day power-fishing and then switched to finesse baits, Soukup said the key to his success was covering water. Around 2 p.m., his fast-paced presentations yielded a 4-07 kicker.

Using his Garmin LiveScope all day, Soukup said he fished from 1 to 50 feet deep. While he’s fished Grand many times and competed in a recent tournament, he decided to enter this event with a clean slate.

“I wanted to come up here and fish off my instincts and that’s what today was about,” Soukup said. “It was all instinctual; watching the wind, running the wind.

“The big deal was how much wind and current was hitting a spot and from what direction. Also, where the little and big drop-offs were at.”

“I had that big one about 8 o’clock, then I caught a 2 1/2- and a 3-pounder really quickly,” LeBrun said. “I really just got in a flurry and I had four in the first hour of fishing.”

LeBrun said one bait presented in a unique manner in a specific scenario was the key to his success. He held his cards low, but noted that the setup he sought was so dependable he could practically expect a bite.

“It’s definitely conditions-related and I do need wind,” he said.

Jacob Walker of Alabaster, Ala., is in the lead for Phoenix Boats Big Bass honors with his 6-09.

Cody Huff of Ava., Mo., leads the Central Opens standings with 568 points. Walker is in 2nd with 541, followed by Daisuke Aoki of Japan with 531, Jacob Powroznik of North Prince George, Va., with 529 and Masayuki Matsushita of Japan with 522.

Powroznik leads the overall Opens Angler of the Year standings with 1,530 points.

Friday’s takeoff is scheduled for 7:15 a.m. CT at Wolf Creek Park with the weigh-in back at the park at 3:15 p.m. Saturday’s final weigh-in will be held at the Bass Pro Shops in Broken Arrow, Okla., at 4:45 p.m.
Here are the totals for the initial Top 10: