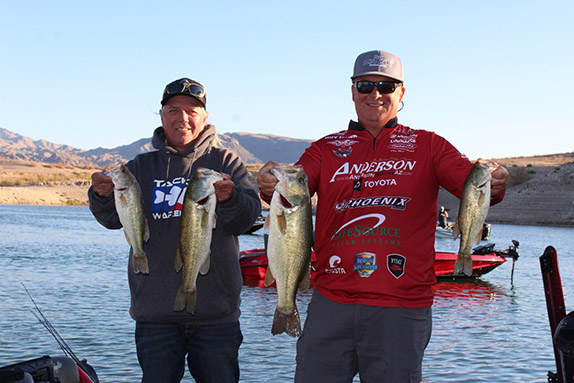 Roy Hawk said it was extremely difficult to make a full commitment to fishing the Las Vegas Wash during the recent WON Bass U.S. Open at Nevada's Lake Mead. In the end, his faith in the extreme western portion of the venue paid big dividends.

The Bass Pro Tour competitor from Lake Havasu City, Ariz. weighed a pair of double-digit bags to win the event for the second time (he also triumphed in 2015). Powerful winds shortened the tournament from three days to two and his 21.74-pound total left him more than a pound clear of runner-up Cliff King.

"I'm so tickled to win it again," said Hawk, who celebrated his 50th birthday just a few days prior to the start of the derby. "I've struggled the last couple years on the BPT and there's been a lot of money going out and not a lot coming in.

"This is a big win for me and my family and I'm really thankful – it means a ton."

Had to Keep the Faith

Hawk had focused his efforts on the Vegas Wash en route to a 2nd-place finish in last year's U.S. Open and he was convinced that the area harbored the quality needed to win. On the flip side, it was difficult to generate any bites at all there during practice.

"It really sucked," he said bluntly. "I could've gone elsewhere and caught a lot more numbers – guys were talking about getting 30 bites a day and I was getting like three.

"It was really weird; I'd never approached the U.S. Open like I did this time. I just wouldn't allow myself to practice anywhere else because I felt so strongly about it. I concentrated on the exact casts I wanted to make and I got real intimate with that area."

Once the tournament got under way, it wasn't easy to stick to that plan.

"You'd go 2 or 3 hours with no bites and you'd be looking at the clock and wanting to get out of there. The first day at noon we only had one squeaker keeper and my co-angler must've thought I was insane. Nobody in their right mind would've stayed and I don't know if I'll ever do it that way again."

He ventured out of the Vegas Wash just once during the tournament – he spent about 20 minutes sampling some clear water in the boulder basin on the afternoon of day 1.

"I thought maybe we could rally up a bag of keepers (the U.S. Open is a shared-weight event, with both the pro and the co-angler being credited with the boat's weight each day). I caught a short fish and had a couple of other taps, then I said, 'I'm not doing this. I'm going back.'''

Upon his return, he was immediately rewarded with two good fish, including a 3-pounder. The two others required to round out a 10.12-pound limit arrived not long thereafter.

On the final day, Hawk and co-angler David Shearer spent the entire day in the Vegas Wash. They got six keeper bites and the biggest five of those combined to weigh 11.62 pounds.

All of Hawk's fish came off rocky cover – there's abundant grass in the lake this year, but none as far back as he was fishing in the Vegas Wash. His bigger specimens came from 5 to 10 feet of water and he and his co-anglers caught some smaller ones in the 12- to 15-foot range.

One cover that had three separate rock outcroppings produced the majority of the fish. His four fish that weighed 3 pounds or more all bit a 3/8-ounce jig made by his friend Chris Kinley and referred to as "My Jig." The jig color was a green-pumpkin blend and the trailer was a Yamamoto PsychoDad in green-pumpkin/red flake.

He threw the jig on a 7'3" heavy-action Taipan rod with a Daiwa Tatula casting reel (8.1:1 ratio) and 16-pound Sugoi fluorocarbon line.

He caught one key fish on a Pepper Casting Jig on 12-pound line, which he fished in clearer water. Both he and his co-anglers caught weigh-in fish on dropshot rigs.

"On both days we caught two or three fish that barely measured," he said. "People tend to think that one squeaker is kind of irrelevant, but if one comes off, I don't win. Each one was so valuable and there's such a fine line between success and failure."