BACK
Repeated Casts Pay Off 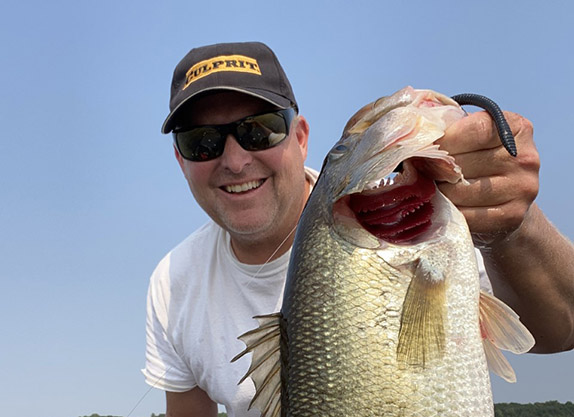 A 6-inch worm rigged on a shaky-head can produce some quality bites in the fall after a piece of cover has been thoroughly probed with a crankbait.

Fall has arrived and I thought I would share one method of many that work for fishing at this time of year.

Twenty-some-odd years ago, I watched Rick Clunn on TV make repeated casts to the same piece of cover from different angles and catch a bass. That hit home with me and has been my go-to method for catching bass in the fall.

It's best to have stained water and baitfish around, but those elements aren't entirely necessary. A good stump or shallow brush pile will hold fish year round as an ambush spot.

It's tempting to make just a single cast to a piece of cover and go on. You really have to work at patience and it's best to be fishing alone for this. You won’t have many fishing buddies left after front-ending someone for 20 casts to one stump. 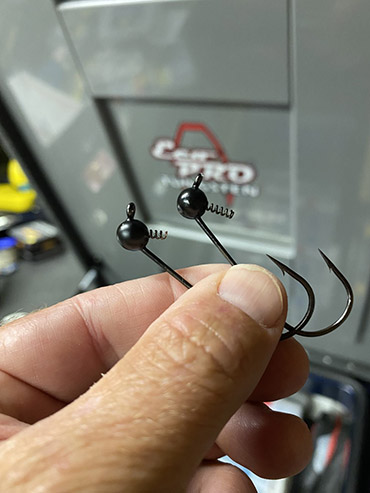 
Cutting off a small portion of the corkscrew baitkeeper on your shaky-head, as depicted on the left, can result in better hookups.

I've found a little twist to the standard cranking pattern. After I thoroughly probe a stump with my favorite Yo-Zuri 1.5 Crankbait, maybe even catching a fish off of it, I following it up with a little finesse.

I have a power shaky-head rigged and ready for this. It consists of a 7-foot Falcon spinning rod with 15-pound Yo-Zuri Super Braid and a 20-pound T-7 fluorocarbon leader rigged with a 1/8-ounce Eco-Pro Tungsten shaky-head with a screw in keeper that I adapt, and a 6-inch Culprit T-Rex worm. This worm is a little thicker than many in its category, but not as thick as a soft stick bait. It's perfect for a fish that was on the stump watching the crankbait, but not reacting. When the worm suddenly falls in, it's a dramatically different presentation and often gets bit.

The heavy line insures against breakoffs in the thick cover and I’ve not found it doesn't deter bites at all.

I've done this many times over the years, including just the other day on a fun trip, catching seven bonus fish on the shaky-head after cranking around, with one pushing 5 pounds. I’m not saying this is a miracle technique, but it’s a solid backup and something that shallow fish in the fall rarely see.

I like to start far back in creeks and work my way out if possible. I may not cast at every piece of cover that many times, but if it's a creek that I know holds a good population of bass, I’m making several and anything that screams at me that it ought to be good, usually is and it warrants the Yo-Zuri 1.5 crankbait and Culprit T-Rex one-two punch.

I always cast to the deepest part of the stump first ¬ if it has one. I don’t make as many casts with the worm as I do with the crankbait; one or two casts and then back to cranking. Sometimes the crank just won’t get into the little spot where the bass is sitting and the T-Rex will get him out. I’d say in a day of fishing with this one-two punch, at least 25 percent of your fish will come on the worm.

Oh, and my little trick on the Eco-Pro shaky-head — I always cut off a tiny fraction of the spring to allow it to hold the worm better and allow for an ever so slightly wider space between the keeper and the hook for better hook-ups.

Try this one-two punch this fall for some great fishing, and be sure to tune into Catching Bass with Dustin Wilks TV presented by Impact Battery.com on WFN.