BACK
Had Best Area To Himself 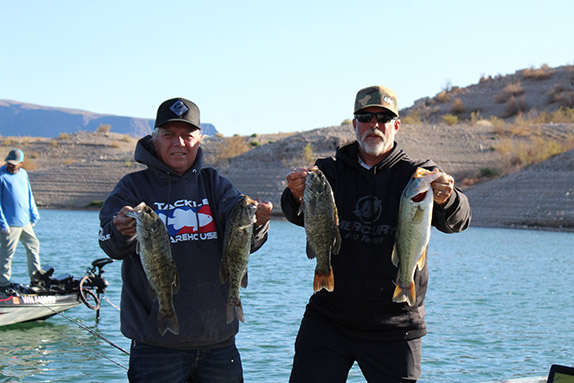 Having the first scheduled competition day of the 2021 WON Bass U.S. Open canceled put the whole field in a sense of urgency. In typical years, winning a U.S. Open requires stringing three consistent days together, with a spectacular day in the mix. Having one fewer day of competition in 2021 meant that anglers needed to hit the ground running and locate the right bites in a compressed timeline.

Not usually an angler who puts together big stringers on Lake Mead, Alpine, Calif. pro Rusty Salewske, a former MLF Pro Circuit TITLE champion, slapped 11.81 pounds on the scales at Callville Bay during the first half of the weigh-in, and it was enough to take the day 1 lead. Salewske’s performance gave him slightly less than a 1-pound lead over Sandy, Utah pro Travis Jewell, who posted a 10.84-pound limit to stand in 2nd place.

Salewske reported making a fairly long run at takeoff and fishing one general area to fill his creel for the day.

“We caught 15 to 20 fish today, but we only weighed fish from one main area, then went searching,” said Salewske. “We power-fished all day, covered a lot of water and tried to figure out where we might be able to duplicate or expand on the areas.”

The leader said that he had his area to himself in the morning, but isn’t sure what to expect on day 2.

“I’m certainly hopeful that I’ll be able to figure it out tomorrow again, but I saw some anglers in the general vicinity later, but I had left my main area by then,” he said. “I’m hopeful that things will go well tomorrow, but this is Lake Mead and these fish are nomadic. They could be miles away from where they were today – I’ll just have to see in the morning.”

Jewell said he burned nearly a complete tank of fuel through his Bass Cat/Mercury putting his bag together. He reported having to cover water but alternate between power and finesse tactics to trick his fish.

“I had to do a little bit of everything today,” he said. “I had an awesome practice and was hoping the fish I found would be there after the windy day yesterday. I had to move around, but found some good ones, and hope we can make it happen again tomorrow.”

Rounding out the Top 5 on the pro side, Davis Hart of Glendale, Ariz. finished the day in 3rd place with 10.68 pounds, followed by Ione, Calif. pro Cliff King, who tallied 10.50 pounds, and Ben Byrd of Moab, Utah and Gary Martlage of Phoenix, Ariz., who tied for 5th place with 10.41 pounds each.

After Wednesday's final weigh-in, the pro winner will receive the keys to a 2021 Bass Cat Puma FTD powered by a Mercury Pro XS 250 Four Stroke outboard valued at $64,000, along with cash prizes.

The live weigh-in broadcast begins around 3 p.m. PST and can be accessed at www.WONBassevents.com and on the WON Bass Facebook page.