BACK
'One I'd Wanted For A While'

U.S. Side No Longer A Nemesis For Cory Johnston 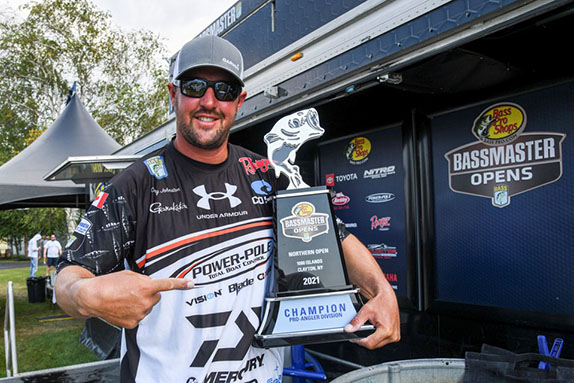 All three of Cory Johnston's bags at the recent Bassmaster Northern Open at the St. Lawrence River/1000 Islands surpassed 25 pounds.

Cory Johnston has won a lot of tournaments and a lot of money at the St. Lawrence River/1000 Islands prior to the recent Bassmaster Northern Open. However, he'd never prevailed in a high-level derby that launched from the U.S. side of the venue situated between New York and his Canadian home province of Ontario.

He rectified that shortcoming with three consecutive bags that exceeded the 25-pound mark for a 78-00 total. His 27-06 haul on the final day allowed him to eclipse fellow Cavan resident Cal Climpson, the day-1 leader, but a 12-ounce margin.

"I'd say this was probably my biggest win and it's one I'd wanted for a while," he said. "It just seems like the U.S. tournaments have had my number."

He exploited both the river and Lake Ontario during the first 2 days of the event before spending the entirety of the final round on the lake. A dropshot rig accounted for his bites, with about 70 percent of the coming on the new, yet-to-be-released worm that he and brother Chris have designed for SPRO.

He said the fish got a bit finicky on the last day, causing him to mix in some other offerings.

Johnston said he put in only about a day and a half of practice for the Open. The primary reason for that was that he could sense a lot of eyeballs on him when he was on the water.

"I knew what the fish were doing and the areas they were going to be in," he said. "My plan was to hit a bunch of spots until I ran into them, and it kind of worked.

Most of his bites came from sharp breaklines that dropped off 3 feet or so. The bigger specimens came from the 35- to 40-foot range, but he also caught some that were only half that deep. The breaklines usually ran for 40 yards or so.

The biggest fish he caught during the event was a 6-pounder on the final day. The previous day, he had one next to his boat that was a bit larger, but it came unbuttoned before he could get it inside the confines of his livewell.

"The last day I gambled a bit and stuck to the lake. I knew where a couple of good groups of fish were and I caught them pretty good."

In the river, he focused on breaks and current seams in the main channel at depths of 30 to 40 feet.

He said that none of the locales he fished during the tournament were places that had produced for him in past events.

"Tournaments are never really won off the same spot twice out there – it's always on different stuff," he said. "These fish move a lot and they're generally not in the same spot they were two weeks before.

"If you have a milk run of spots and you start hitting them, you're going to run into (the fish) eventually. A lot of times you just don't know where it's going to be."

> Johnston said he'll compete in one more event on the St. Lawrence this year, then his attention will shift to hunting. "Chris is already down in New Mexico bow-hunting for elk and he saw 15 bulls the first night, so I'm a little jealous," he said.