BACK
Will Do Whatever It Takes 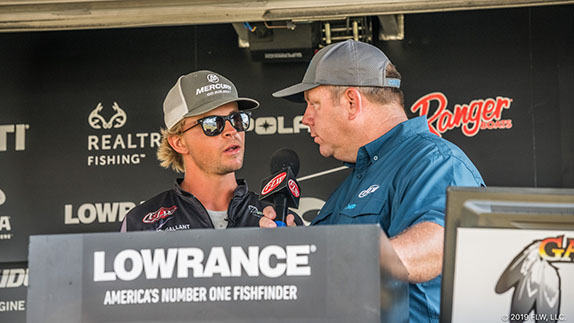 Cooper Gallant has had a profitable year fishing tournaments in his native Canada.

At age 4, using a bobber and worm, Cooper Gallant caught a 4-pound largemouth. It was his first fish ever, off the dock of a cottage that his parents rented at Paudash Lake in his native Canada. “I have the worst memory, but I remember every second of catching that fish. I’ll never forget it,” Gallant said.

At 23 years old, Gallant has one goal – qualifying for the Bassmaster Elite series.

“I love bass fishing so much; constantly learning and putting the pieces of the puzzle together to try and better yourself as a tournament angler." he said. "I live for that next bite! I’m blessed that this is what I get to do. It’s the last thing I think about before going to bed and the first when I wake up."

Growing up in the Durham Region of the Canadian province of Ontario, with the shoreline of Lake Ontario in his back yard, Gallant was also steps away from Bowmanville Creek and several marshes renowned for trout, salmon, carp, pike and bass fishing.

At 13 years, he won the Ontario Bass Nation High School Angler of the Year title while his childhood friend and longtime tournament partner, Danny McGarry, won the Championship on the Bay Of Quinte. They went on to represent Team Ontario at the B.A.S.S. Nation Regional Championship and won the event on the St. Lawrence River.

After saving every penny to buy his first boat, a Nitro 700LX with a Mercury 115-hp motor, he and McGarry could only afford to fish one qualifier. By placing 7th at the event on Rice Lake, they qualified for the 2016 FLW Canada Championship.

Sleeping in Gallant's truck for 10 days, they won the title on Big Rideau with big bags of smallmouth bass, which qualified them to fish the FLW Costa Series championship on Kentucky Lake. “That was the tournament that gave me the fire to one day fish for a living,” Gallant said.

Gallant closely followed the careers of other Canadians, namely Chris and Cory Johnston, and also anglers such as Kevin VanDam and Brandon Palaniuk. The latter, like Mike Iaconelli, punched his ticket to the Elites through the B.A.S.S. Nation, which resonates with Gallant as he tries to follow their path.

Hammer on the Homefront

At the beginning of the summer, Gallant won the Competitive Sport Fishing League (CSFL) Canadian Open on the famed Lake Simcoe trophy smallmouth factory. Though he only generated seven bites on both days of the tournament, he sacked over 28 pounds on day 1 and went on to claim a berth in the Toyota Series Championship on Lake Pickwick this fall.

He’d found smallmouth gorging on crayfish in water 6 to 9-feet of water, but they were incredibly skittish, typical for that lake. Though he could coax some on a finesse rig, Gallant worried he’d used all his tricks.

While speed-reeling a Yamamoto Senko to make another cast, a monster smallmouth tracked it right to the boat. Adjusting to a jerkbait, he landed two smallmouth over 6 pounds in short order.

A few weeks later, he paired with McGarry to win the CSFL tournament on Rice Lake with a mixed bag. On a lake mostly dominated by smallmouth in recent years, based on a hunch by his partner, he bagged a largemouth from a boulder pile with a black Punisher Mini-Jig that he’d threaded a black/blue Strike King Baby Rage Craw onto. That cull sealed the deal.

He returned to Rice Lake at the beginning of August to win the Shootout Fishing League tournament while fishing solo, sacking 25.39 pounds.

Gallant knows that to make it to the Elites, he’s going to need a business plan. For that, he’s looked to Canadian bass fishing tournament legend Bob Izumi for advice. Izumi, a longstanding Mercury Marine pro, led him in the right direction, helping Gallant start a relationship with the brand that has been fruitful since 2019.

“Growing up, any time I needed advice, Bob has been one of the best people to call," Gallant said. "He’s honest and gives you the straight goods. In addition, he’s been extremely supportive and would do anything for you."

Next up, Gallant met with Jim and TJ Lacey, which led to further discussions with Bass Pro Shops. The result – Gallant is running a Nitro Z-20 with a 250-hp Mercury ProXS.

Gallant got in on the social media scene early on, and it paid off.

“When I was younger, I posted fishing content to National Pro Staff, to which Durham Tourism and I both belonged. They reached out to me for some images, and in 2018 they reached out about forming a partnership."

Wanting to promote the diverse species available to those who venture to Durham, Ontario, to fish, a working relationship with Gallant seemed to be a perfect fit.

Having learned the ropes of sponsorship in his early teens in the local snowboarding scene with his brothers, Gallant was comfortable speaking in front of a camera and developed the necessary editing techniques. His older brother, Colin, has been the master behind the lens ever since.

Gallant was quick to join the new wave of social media-savvy anglers who realized the value of generating marketable impressions and created his brand via YouTube, Facebook, Instagram, and www.CooperGallantFishing.com.

Gallant is competing in the Bassmaster Northern Opens in his quest to make the Elite Series. His first event at the James River was “a grindy one.” He had no problem catching a limit, but getting a big bite proved to be his nemesis and resulted in a 70th place finish.

The second event, at Oneida Lake, really stung. With a bag that was one fish short of a limit on day 2, he missed the Top-10 cut by less than 2 pounds. He'd lost three smallmouth that weighed more than 4 pounds each on a topwater on day 1.

Although they kept coming unbuttoned from his walking bait, they wouldn’t eat much else. The worst part was he knew it was going to happen that way.

“I shouldn’t have even tied the topwater on because I knew I was going to lose one," he said. "I had that feeling in my gut the whole morning. After losing three fish over 4 pounds, it messed me up for a good half-hour and I’m usually good at shaking that stuff off. But unfortunately, I only needed one of those fish.

"It hurts more after this event, coming in 16th, knowing if I’d had a better event on the James, I’d be in better shape heading to the St. Lawrence River tournament. It is what it is.”

How does a 23-year-old afford to commit to fishing the entire Bassmaster Opens schedule in 2022? Committed sponsors and amassing almost $30 000 in winnings this year make for the perfect recipe.

He credits his sponsors (Mercury Marine, Nitro Boats, Durham Tourism, Gagnon Sports, Quicksilver Marine Parts and Accessories and Vanderlaan Building Products Ltd.) for providing the funding and support to focus on chasing his dreams. He’s frugal, too; he lives in his truck on the road and survives on a tight budget.

His parents were hesitant at first, wanting him to continue his education past his high school diploma. But today, his parents fully understand and support his dream and career path; they can be found at weigh-ins and are his biggest fans.