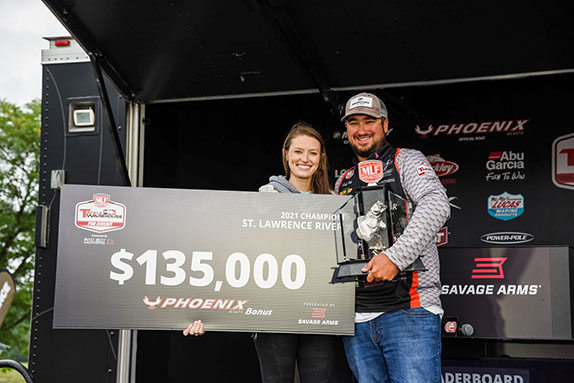 Cody Pike far exceeded his objective in the final regular-season MLF Pro Circuit event of 2021 at the St. Lawrence River.

Cody Pike wasn't overly thrilled with any of his first four outings as an MLF Pro Circuit competitor. The fifth one was pretty decent, and then the regular-season finale was spectacular.

The 28-year-old rookie from Virginia triumphed in last week's derby at the St. Lawrence River with a four-day total of 82-12. Starting the final day with a 6 3/4-pound deficit, he caught a 22-03 sack that was enough to give him the win when previous leader Joey Cifuentes managed just 12-05.

"I can't believe it actually happened," he said. "I really haven't had a chance to sit down (and process it) yet. It's absolutely and awesome feeling."

More than He'd Hoped For

Pike posted finishes of 95th, 65th, 74th and 67th in the first four tournaments of the season and was in 76th place in the Angler of the Year standings (more than two dozen spots out of TITLE Championship qualification) with two-thirds of the campaign in the books.

A 32nd-place showing at the Potomac River, a fishery he knows well, moved him up to 44th (a few places inside the TITLE cutoff). His main objective headed into the St. Lawrence was to hold his ground.

He'd been to the venue on several occasions, but primarily on fun-fishing excursions with friends. On calm days, they'd head out on Lake Ontario (which was off-limits for the Pro Circuit event). When the wind blew, they fished around the mouth of the river, so he didn't have a lot of experience with other stretches

In practice, he felt like he uncovered enough in the vicinity of Clayton, N.Y. to catch the 16 pounds per day or so he'd need to lock up his TITLE berth. He eventually discovered that there were bigger fish hanging around those scattered rock piles than the 3- to 3 3/4-pounders he'd connected with on those two days.

"I thought it was going to be a numbers thing and I could catch 15 or 16 pounds pretty easy, but 18 would be really hard," he said. "It turned out that I didn't catch as many as I thought I was going to, but I caught the right ones."

He managed more than 20 1/2 pounders per day, alternating two bags in the 19s with two over 22. A dropshot rig produced all of his fish and all were of the smallmouth variety.

A Yamamoto Shad Shape Worm enticed his first fish of the derby, but the 19 others he took to the scale in Massena, N.Y. fell for a Berkley PowerBait MaxScent Flat Worm.

He caught fish from water that was as shallow as 28 feet, but his best specimens came from the 38- to 44-foot depth range. He started the tournament with about 20 rock piles (most of which were about the size of his boat) in his rotation, but expanded that number to 50 or 60 as he found new ones during the latter portion of the competition days.

"Those fish were coming from a big area where they'd spawned and that was the first place they could get to that had deep water," he said.

He said he rarely got bit casting to anything. His money presentation consisted of allowing his bait to drift along just off the heavy current seam.

"I just kind of bumped myself along with the trolling motor," he said. "It had to be a natural drag with the current."