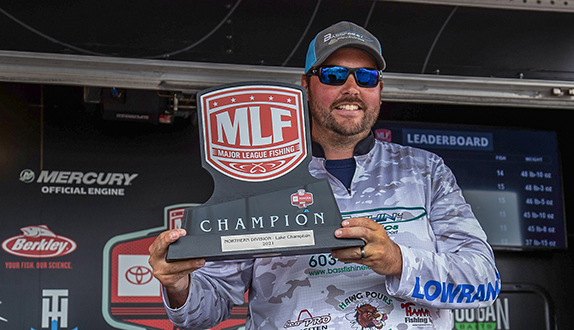 Stephen Estes relied entirely on a dropshot rig en route to his victory at the Lake Champlain Northern Toyota Series.

Stephen Estes spends a considerable amount of his free time fishing at Lake Champlain, which is about a 3 1/2-hour drive from his home in Auburn, N.H. He's competed in quite a few tournaments there and won a few at the club level, but his victory in the recent Northern Toyota Series derby was by far his most significant triumph to date.

The 33-year-old father of two, who's employed as a field engineer for a company that services hospital radiation machines and also operates a fishing electronics business, averaged more than 20 pounds per day, with the lightest of his three bags registering 19-06. He beat out runner-up and MLF Pro Circuit competitor Matt Becker by 1-03.

He had no aspirations of becoming a tour pro prior to the win, and that hasn't changed.

"That's not the lifestyle that I dream of," he said. "Maybe next year I'll try to fish the whole (Northern Division), but I have no desire to fish at any level above that.

"The fish-finder (business) thing has been awesome and I've met a ton of people and it's opened up a lot of doors and I'm happy with where things are at. It really boils down to work and family – it'd be tough to travel all over the place."

Had to Get Away

Estes spent the vast majority of his four practice days searching for fish-holding places that he wouldn't have to share with fellow competitors. He discovered eight or 10 that he considered potentially productive, but alternated between two primary areas for most of the tournament.

He had six milfoil beds that were harboring 4-pound-plus largemouth, but he never visited them during competition because the smallmouth he was connecting with were hefty and more abundant that the green fish.

He was quick to point out that his program wasn't a "waypoint thing" – the smallmouth were roaming around at depths ranging from 20 to 30 feet and feeding up on perch.

The ActiveTarget feature on his Lowrance electronics was critical for both locating and catching the big bronzebacks. He threw his dropshot rig to individual fish – some that were relatively close to his boat and others that were 100 feet away.

His total keeper count each day ranged from 20 to 40.

"Every fish was different and the bites came in waves," he said. "Sometimes every fish I put (the bait) in front of bit and other times I'd have to kind of force them to bite.

"The thing with ActiveTarget is you can mess with fish and tease them and see how they're reacting in 30 feet of water. That's something that you couldn't do before."

His bags were filled entirely with smallmouth and all 15 fish were enticed by the dropshot. He also caught some on a spybait, but none that were worthy of making a trip to the scale.

> "I just rotated the same setup all day with different (bait) colors," Estes said. "They were all similar – they all had green pumpkin in them."