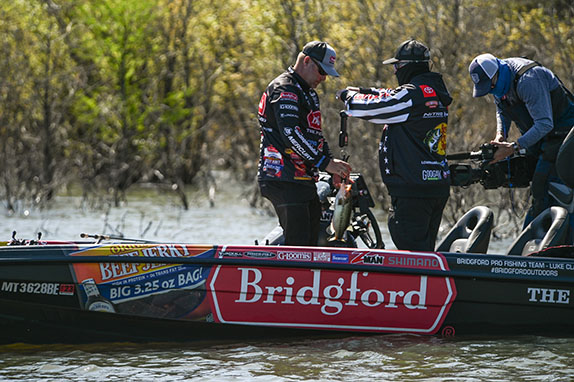 Luke Clausen came within one spot in the standings of his first tour-level victory since 2011 at the Sam Rayburn Reservoir MFL Bass Pro Tour.

Following is some pattern and gear information for the anglers who finish in the 2nd through 5th positions at the recent Sam Rayburn Reservoir MLF Bass Pro Tour in Texas.

If not for Ott DeFoe's late-afternoon rally on the final day, Luke Clausen would've tasted victory at the tour level for the first time since 2011. The former Bassmaster Classic and FLW Cup champion caught nine scorable fish for 27-05 in the Championship Round to end up 2-13 behind DeFoe.

He spent the two-day qualifying round primarily throwing a bladed jig while mixing in a crankbait and a swimjig. He transitioned to a soft stickbait midway through the Knockout Round when the bladed-jig action tapered off.

"The conditions got slick and sunny and I didn't feel like I had a lot of options for throwing moving baits," he said.

He fished the soft stickbait on both Texas and wacky rigs. He employed the latter when the wind blew and the former in calmer circumstances.

He estimated that he caught 75 percent of his fish off cypress trees and the rest off a variety of other cover types.

"I wasn't married to anything and I could run around and fish the conditions," he said. "I fished new water every day and I didn't have any preconceived ideas about where I was going. I fished wherever the elements made it look good to me." 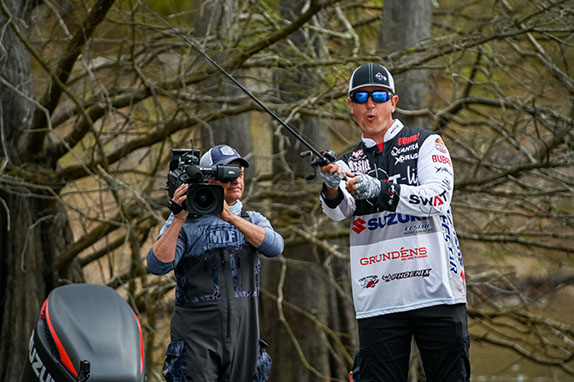 
Gerald Spohrer rode a swimjig to a win in the Group B Qualifying Round and a 3rd-place finish overall.

Gerald Spohrer was the winner of the Group B Qualifying Round, which allowed him to bypass the Knockout Round and advance straight to the finals. His tally in the Championship Round was nine fish for 26-08.

He fished pockets in the far north end of the lake and threw a swimjig throughout the event.

"Focusing on the north instead of the south was a big key for me," he said. "Based on experience at this time of year, the south gets hammered and I was trying to avoid crowds because I knew they were going to be a factor."

He bounced from one cypress tree to the next and threw at other types of cover in between. His ratio of underweight fish to scorables was about 60/40.

"There was more than one fish on a cypress tree and it was important to find a bait that gave the biggest one an opportunity to get it first," he said as to why he chose a swimjig over a bladed jig. The bigger ones were right up against the tree or behind it and I was making casts with the swimjig that I couldn't make with a ChatterBait or a spinnerbait. I could skip it six or seven feet farther back to reach fish that were less likely to be pressured." 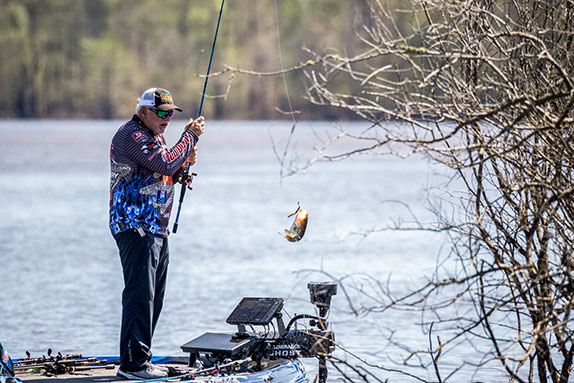 
Tommy Biffle flipped and threw a spinnerbait around bushes to notch his best BPT finish to date.

Tommy Biffle's showing was by far his best to date on the BPT. He notched nine fish for 20-03 in the Championship Round.

He focused on woody cover in the northern part of the lake.

"I knew the water was up in the bushes a little bit and I was going to be doing what I like to do," he said. "I didn't even look around or try to do anything else.

"Just about any place or any bank could have fish on it, but a lot of them didn't make the (2-pound minimum weight requirement). One day I probably caught 40 or more and every now and then I'd get a big bite, but there wasn't as many of those as there should've been. Those fish just hadn't moved all the way up. The water was 65 to 67 degrees, but I think that cold snap there everybody had set them back a ways."

His attack included flipping a YUM Dinger or his own Gene Larew Baits Biffle Bug, along with throwing a spinnerbait to cover water faster under cloudy conditions.

"I flipped the Dinger on the first day when it felt like they were trying to spawn. I'd feel a little tink and if I jerked, I'd miss it. If I let it sit there for a minute, they'd swim off with it." 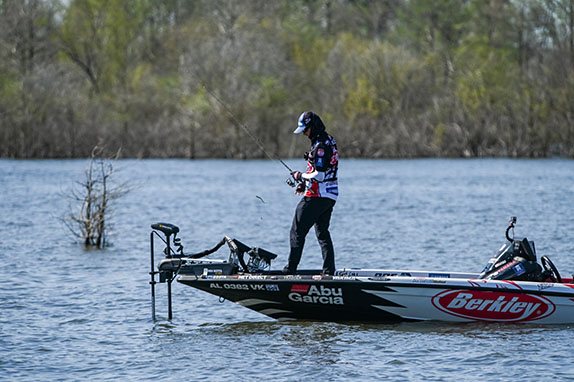 
A dropshot rig helped Justin Lucas to a 5th-place finish.

Justin Lucas, who went on a tear last summer that included two victories, postes his first single-digit finish of 2021. He caught six fish for 20-00 in the Championship Round after 30-pound-plus hauls on both the second day of his Qualifying Round and the Knockout Round.

He began the event throwing a floating worm around bushes.

"I went there thinking that was going to be the deal, but it wasn't," he said. "I had enough bites where I might've been able to flirt with the Top 25, but I wasn't going to make the Top 20. I had to do something different.

For his second day on the water, he switched his focus to flats with hydrilla in the middle portion of the lake, throwing a swimbait for pre-spawners. His first fish was a 7-14 bruiser.

"Making that change on day 2 and getting that bite that clued me in was the biggest thing for me," he said. "I was about to leave – I'd actually said 'last cast.'''

He transitioned to a dropshot rig midway through the Knockout Round as the swimbait bites began to dissipate and stayed with it the rest of the way.

"I was fishing clean spots in the grass in three to four feet of water," he said. "I'm pretty sure they'd started spawning in there."