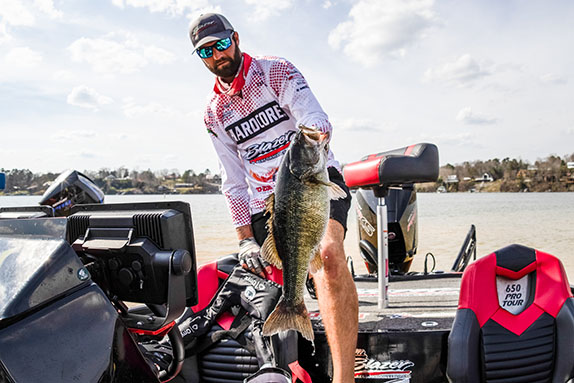 Spencer Shuffield logged his fifth finish of 12th or higher in his last seven outings.

Following is some pattern and gear information for the 2nd- through 5th-place finishers at the recent Lewis Smith Lake MLF Pro Circuit event in Alabama.

Spencer Shuffield, the runner-up to Ron Nelson in last year's Angler of the Year race, got back on track after a 101st-place showing in the season opener at Lake Okeechobee last month. This finish was his fifth of 12th or higher in his last seven outings.

He spent the first two days primarily catching fish off points with two different jerkbaits, then turned in a couple of big sacks on the weekend throwing a dropshot around docks.

"The biggest thing for me was changing my game plan from what I'd figured out in practice," he said. "When what I was doing quit working, I had to relocate the bigger fish."

The points he'd been exploiting were usually the first ones leading into pockets. The docks he fished were farther inside the pockets – they were holding bass that were on the move to their spawning areas as initially chilly air and water temperatures continued to climb.

"The biggest dock in a pocket was usually where the biggest fish would be."

He made a run at catching winner John Cox in the final round, but ultimately came up about 5 1/2 pounds short. 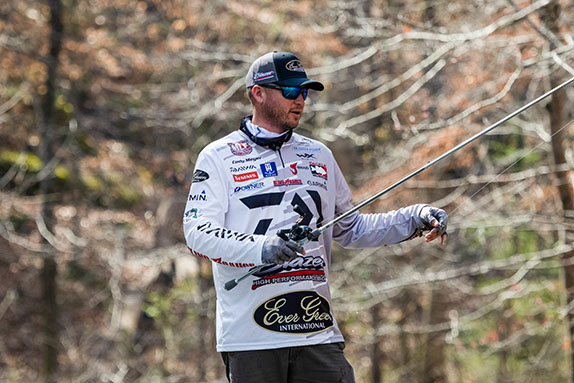 Cody Meyer also started out throwing a jerkbait on points and also mixed in a small swimbait. He transitioned to a wacky-rigged Senko on docks for the final day and a half, catching 4- and 3-pounders late on day 3 to squeak into the final round.

"On day 3 I caught my first two keepers on a jerkbait, then it totally died after that," he said. "I stuck with it for a while and then started throwing all kinds of stuff, and I couldn't catch them. In the last hour the water finally got up into the 60-degree range and they started going to the bank and I caught those two fish to survive.

"The last day I did nothing but run shallow pockets with the Senko. The switch had flipped and a huge wave of fish went to the bank. The last dock in a pocket was where I'd get a bite and every time I came back there were more in there. They were coming by the minute."

The LiveScope feature on his Garmin electronics was a huge factor in the early going as the bass were keyed in on large balls of herring, which often moved a considerable distance from the shoreline.

"I'd start on a point, but I wouldn't be looking at the point (his attention was on his graph). By the time I looked up, I'd be half a mile away from the bank, just following the fish." 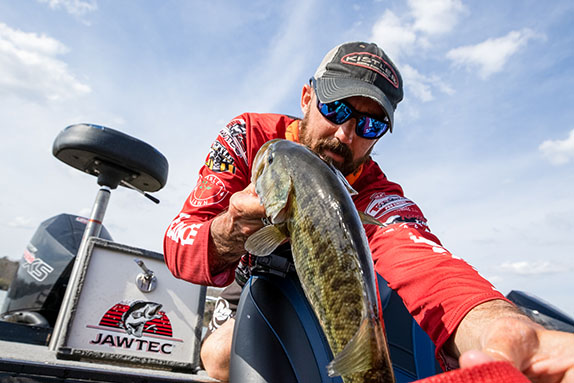 
Kyle Cortiana's 4th-place finish was easily his best as a pro.

Kyle Cortiana's finish was easily a career-best for the fifth-year pro. He was another competitor who began the event fishing points and moved on to docks as conditions continued to get warmer.

Some of the docks he exploited were nowhere near the shallows – they had as much as 80 feet of water underneath them.

"The docks were the only structure (near the surface) in those bluff sections where I was at," he said. "They could sun themselves and chase baitfish and the more isolated a dock was, the fish it had around it. Every single one of those docks I caught a fish or at least had a bite."

"In practice I caught a 4.58-pound spotted bass and it coughed up a 6-inch herring, and that gave me the confidence to throw something bigger," he said. "If there was one sitting on a rock transition or behind a dock, it might eat it.

"The little one had a wider wobble and kind of shimmied, so it gave the fish a different look." 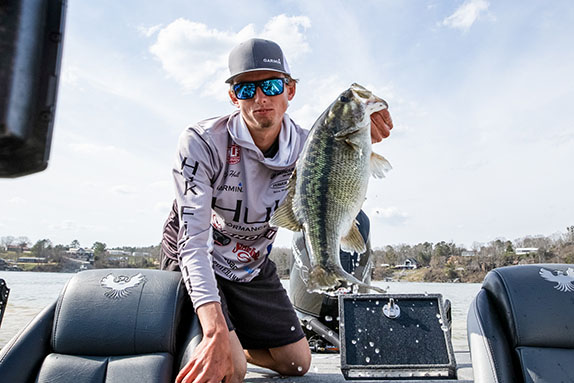 Kyle Hall, the 2020 Pro Circuit Rookie of the Year, bounced back from a 152nd-place bomb at Okeechobee. He spent the entire event pursuing open-water fish, relying heavily on forward-facing sonar.

He caught about half of his fish on a small swimbait and the other half on weightless Fluke-style baits.

His set his Garmin LiveScope to 70 feet (he normally runs it at 80 or 90) so he could make relatively long but precise casts to the fish it revealed to him. There would often be one or two bass near a ball of bait, or sometimes four or five. If there were a handful, he could sometimes get them to fight over his offerings.

"When I caught the bigger bags on the last two days I was catching fish 20 feet off my trolling motor. If I stopped and put it in reverse, they'd come up looking, curious to see what the commotion was. Then they'd see a dying Fluke falling in front of their face and they'd eat it."