BACK
Rookie Au In 2nd 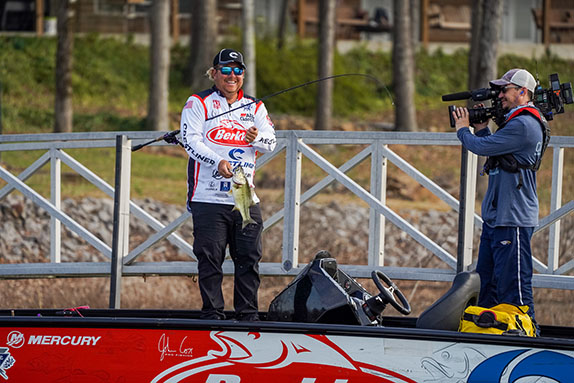 John Cox visited a lot of places to catch the five keepers he weighed in on day 3.

John Cox caught a 12-pound stringer on day 3 of the Lewis Smith Lake MLF Pro Circuit in Alabama to extend his lead to more than 5 pounds with one day remaining. The three-tour pro from Florida's total sits at 45-10.

Rookie Tai Au of Arizona jumped from 5th place into 2nd with a 12-12 sack, giving him a two-day total of 40-06. His 5-04 deficit could prove challenging on the stingy fishery.

Spencer Shuffield made the biggest jump of the day, starting in 28th place and vaulting into 7th place with a 16-10 haul for a 39-03 total.

“I want to win so badly on this lake,” Cox said. “I want to win here worse than anywhere else in the country. It would make a lot of really bad memories disappear. But today was a little miserable. The only keepers that actually took my bait were the five I brought to the scale.”

Cox said despite the struggle on day 3, he’s still not really looking at beds or trying to fish them.

“I saw some empty beds and a few with fish on them, but the fish were really spooky,” said Cox. “They still needed to be surprised or tricked into biting. There aren’t any eggs down, so they are past the point of where I’ve already caught them, and now are further in where they want to make their beds.”

Cox said he caught a lot of males, but they just weren’t big enough to keep.

“I know I’m in the Top 10 and I’m trying to get excited for tomorrow, but I’m so burned out – there have been a lot of boats on a lot of areas today, so I tried to let some of those areas rest and ran around and fished more random stuff to try to get to those better pockets I wanted to fish. I don’t think we weighed one fish today out of any of the actual pockets I was looking forward to fishing.

“I think I’m just mentally and physically drained from fishing so much water and not getting bit. A lot of times through the day, I was thinking ‘I need to change baits – I need to change colors’, but I honestly just think if those fish were ready, they would have taken anything.

“I went to start on a stretch, but threw to a dock randomly and caught one, then threw to the dock again and caught another one, which got me excited – but that was the total excitement for the entire day.”

Cox said he almost ran all the way to the dam around 10 a.m., but changed his mind because he had three bass and thought he would be able to catch two more pretty easily.

“Hopefully it won’t be as crowded tomorrow – today it was nuts everywhere I went, with people on all the spots,” said Cox. “I’m planning to just rig up everything the same tomorrow and see what happens.”

Here are the totals for the anglers who advanced to the final day: