Consistent Cox Is The New Leader At Smith 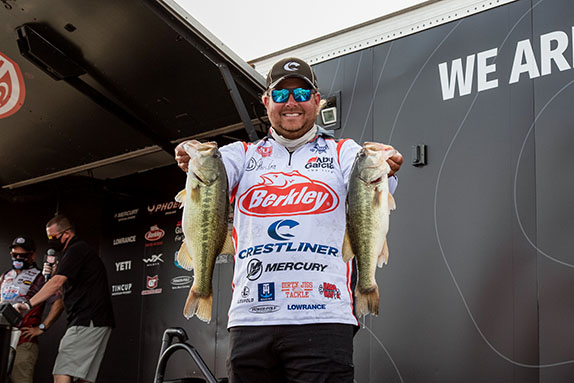 John Cox caught his second straight 16-13 stringer on Friday to move into the lead at the midway point of the Lewis Smith Lake MLF Pro Circuit in Alabama with a two-day total of 33-10. He'll start the weekend with a 1-12 lead over day-1 leader Kerry Milner who boxed 13-14 in the second round.

Cox said he’d been itching to sight-fish beds, but didn’t allow himself to even look on either day.

“I just know they aren’t ready yet,” said Cox, the 2016 FLW Cup champion. “I’m hoping they get ready before the tournament is over, but there are too many on the move right now and there are way more opportunities to run into them while they are moving than to catch them on a bed.”

Cox said he went into the tournament planning to focus on dirty water until the bass committed to beds, then switch to cleaner water when he could sight-fish them. However, after the last two days’ haul, he will likely stick with what’s working.

“I caught many of (day 2's) fish in random pockets that I hadn’t visited yet, so I think just following that pattern and catching them on the move is going to be my best bet,” continued Cox. “The water is warming up so fast – there was almost a 10-degree difference from the beginning of the day to the end – so I’m definitely keeping my options open to any changes in movement over the next two days.”

Cox said he had seven total keepers on day 2, which was quite a feat considering it was a struggle for most of the field.

“I’ve been throwing a Dirty Jigs Swim Jig with a Berkley Powerbait Maxscent Meaty Chunk Trailer and mixing it up with a frog and a wacky-rigged Berkley Powerbait The General Worm,” said Cox. “I fished different areas of the lake, but basically used the same baits and techniques both days.”

Cox, who has a lot of history on the fishery, said he’s fishing many of the same pockets he’s fished in the past.

“They served me well then and I hope to continue the success through the remainder of this event.”

The 163-angler field was reduced to the Top 50 following the day-2 weigh-in. Only the Top 10 after day 3 will advance to the final round.

Here are the totals for the current Top 10: