Brush Dominated In The Closing Rounds 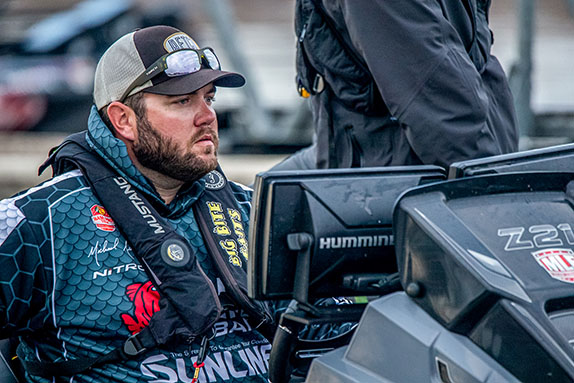 Michael Neal wisely abandoned his shallow program when pressure on those fish got too heavy.

Following is some pattern information for the 2nd- through 5th-place finishes at the recent Bass Pro Tour REDCREST championship event at Alabama's Lake Eufaula.

Michael Neal, still seeking his first victory at the sport's top level, logged the 11th Top-5 finish of his career. He caught 10 fish for 31-04 in the finals, trailing winner Dustin Connell by a little more than 5 1/2 pounds.

He used a ChatterBait to catch shallow fish from pockets on the Qualifying Round days, then switched to brushpiles with a jerkbait and a spinnerbait in the Knockout and Championship rounds.

"I thought I'd eliminated the deep stuff (on the one day of practice the field was allotted)," he said. "I ran brush and didn't see many fish and I got three bites all day.

"I was getting bites up shallow (once competition got under way) and I thought there was more fish coming, but when I went through an area I couldn't double back and get another bite. It was like I just caught what was there and that was it."

For the Knockout Round, the field was joined by a large contingent of anglers practicing for a local derby.

"I ran from my best spot to my second-best and every pocket in between had multiple boats in it," he said. "I caught one out of my first spot, then nothing after that."

He'd marked about two dozen piles at depths ranging from 8 to 12 feet on the lower end of the lake, which contained the cleanest water, and switched his focus to those.

"Knowing when to give up on the shallow bite because it was getting so much pressure was the key. It could've just as easily gone the other way (and dropped him in the standings), but it went the right way this time."

> He also employed a couple of other jerkbaits in order to reach varying depths. 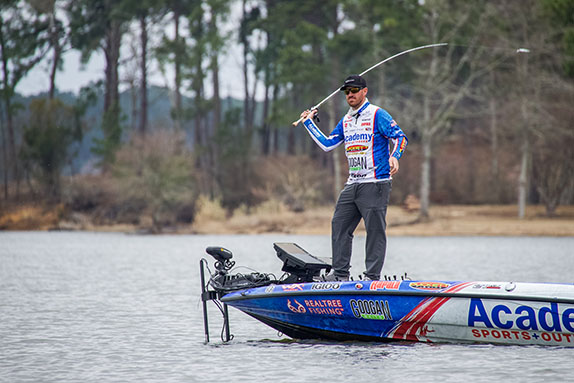 Jacob Wheeler, the No. 1 angler in the BassFan World Rankings for going on two years now, notched yet another high finish with nine fish for 25-06 in the Championship Round. He was the winner when the Bass Pro Tour visited Eufaula in 2020.

He fished a combination of brushpiles, hard spots and secondary points after exploring both shallow and deeper locales on the practice day. He started out throwing a jig, but switched to a jerkbait after the arrival of sunnier, warmer weather prompted the fish to move higher in the water column and suspend in the tops of the piles.

"It felt like the fish were really sitting toward the bottom (when the week started) and then moved up as the week went on," he said. "It didn't feel like it was that way from the beginning.

"In the Knockout Round, I didn't catch any scoreable fish on the jig, so I picked up the jerkbait. I had a few different ones tied on to go shallower or deeper and a few different colors to see if that would make a difference. Like if it was flat-calm, I might fish one that was translucent. I could see the fish looking at the bait (on his graphs) on the brush and the points and I caught a few that were out in the middle of nowhere, suspended over nothing. They were just in no man's land." 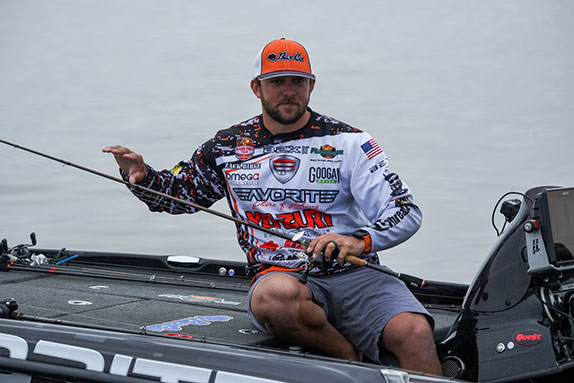 
A spinnerbait produced the majority of Zack Birge's bites.

Zack Birge started out fishing shallow brush outside of spawning areas and stuck with it throughout. He registered seven fish for 24-01 in the Championship Round.

"Practice was kind of hit and miss," he said. "I caught some up shallow on a ChatterBait, but I really didn't like what I was seeing. I had a bunch of brush marked, so I fished that in the tournament.

"I wasn't getting a ton of bites, but when I got bit it was usually a good one."

The depth range of the piles, of which he had about 30, varied from 8-15 feet. They were scattered from the middle portion of the lake to the lower end. They were in clean, 54- to 60-degree water.

"I could see more than one fish on almost all of the piles, but there were only a certain few where I caught multiple good ones. The best ones I'd revisit two or three times throughout the day.

"There were a handful of other guys in the same area, but they weren't fishing the exact same piles."

He caught the vast majority of his fish on a spinnerbait, but his two biggest ones in the Championship Round were enticed by a swimbait. 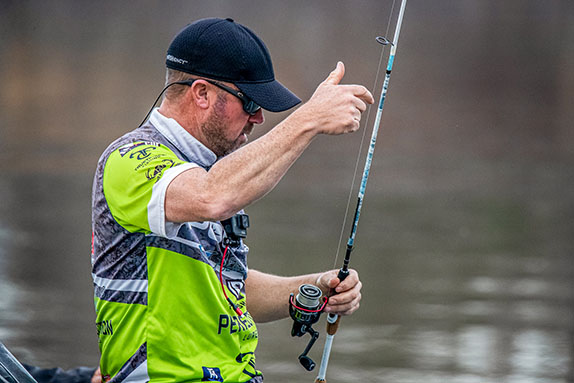 
Mixing a crankbait into his program on day 3 proved to be a good move for David Dudley.

David Dudley employed a wacky-rig and a shaky-head for most of his first 2 days on the water. He did some of that in the Knockout Round as well, but also added a crankbait to his arsenal.

"To me, the clutch move was on day 2 toward the end of the third period," he said. "I knew I had enough to make it in (to the Knockout Round) and I decided to try to expand and see if I could find something off the bank. At the very end of the day I found a spot where I caught two on two casts with the crankbait.

"On the third day, at least half of my keepers came cranking. If I hadn't followed that instinct and been willing to practice during the tournament, the outcome might've been a little different."

The crankbait fish came from 6 to 10 feet of water on points with steep drop-offs. The ones he caught on the spinning-gear setups were in shallower water and relating to various types of hard objects – docks, logs, stumps, etc.

"The cool thing was how everything progressed so rapidly," he said. "At the beginning of the week the fish were on the deeper side of the docks and as it went on they went to the shallower side – from 8 feet to 2 feet.

"It was kind of the same thing with the hard soft – they went from the outside end of the limbs up to the trunk. You could watch their progression over that 4- to 5-day period."

The wacky-rig produced all of his six-fish, 18-12 haul in the Championship Round.

"They'd already begun to spawn; one time I hooked the male and the female on back-to-back casts."