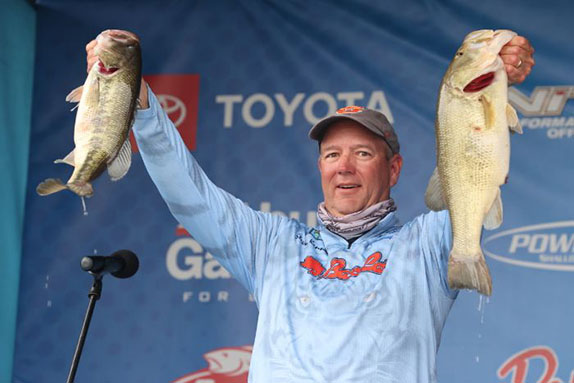 Runner-up Steve Kennedy had three good days and one bad one at the Tennessee River Bassmaster Elite Series.

Following are some pattern notes for the anglers who finished in the 2nd- through 5th-place positions at the recent Tennessee River Bassmaster Elite Series.

Veteran Steve Kennedy's runner-up finish was his first Top-5 showing since his victory at Lake Dardanelle in 2017. A lackluster second day pretty much eliminated his chances of overtaking eventual wire-to-wire winner Jeff Gustafson.

"My main deal was flipping a jig the first two days and throwing a (bladed jig) the last two days after the air and the water started warming up," he said.

He fished the lower portion of the lake and concentrated on stained water in the mouths of creeks. That water was 51 or 52 degrees compared to 46 or 47 on the main river channel.

"There weren't a lot of fish there and it was difficult to get a bite," he said. "I got six bites the first day and four the second day, when I landed two and lost two. I caught most everything on wood and when the sun was out it worked pretty good.

"It was mostly laydown stuff that had washed down the river; the bigger, the better, but I couldn't be picky."

He made the switch from flipping to the bladed jig late on day 2 and weighed the biggest sack of the tournament – the only one to surpass 20 pounds – in the third round. 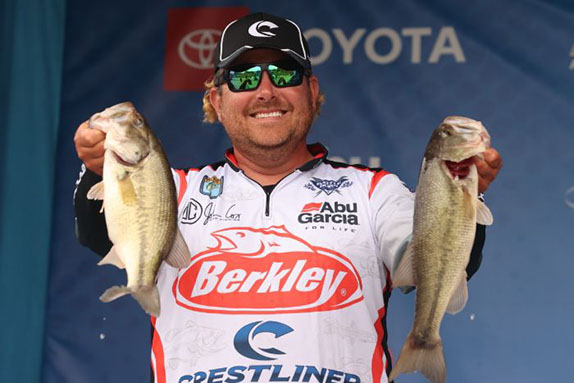 
John Cox concluded the event with three straight bags in the 14-pound class.

John Cox got only six bites in three days of practice and hadn't gotten any by 11 o'clock on the first competition day.

"I was pretty much out of ideas so I decided to go back and try the creek where Glenn Browne won the FLW tournament in 2010," he said. "I'd spent two or three hours in there in practice and never had a bite, but it looked nice and there was some color to the water.

"I got a keeper right away and I caught the 9 pounds I weighed in a couple hours. I was thrilled."

His next three bags were all in the 14-pound class. All 20 fish that he weighed were enticed by a Berkley Frittside crankbait.

"The first couple days I was cranking the back of a flat that had a little bit of wood and some drains," he said. "By the final day it really started warming up and the water had been dropping the whole time and I caught every one on the same cast on the corner of a bridge.

"A lot of the fish were slapping at it; they really didn't want to eat anything. I'd say out of the 20 fish I weighed, more than half were hooked outside the mouth. The one I caught that was almost 6 (pounds) really ate it and so did one of the 4-pounders."

> He sometimes threw the bait on a 6.2:1-ratio reel if he wanted a faster presentation, but discovered that it got hung up more often. 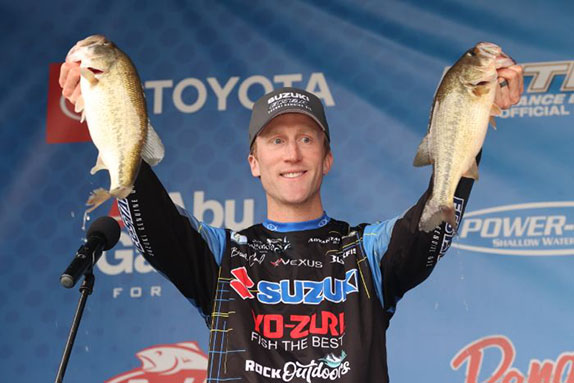 Brandon Card spent the first two days fishing away from the bank about halfway back in a creek channel – where the channel ran into a large flat. He caught most of his fish on a finesse jig and a few key specimens on a jerkbait.

That action fizzled on day 3 as heavy rain the previous day had muddied up the water. He managed to catch two on a jig and one on a shaky-head for a bag that weighed less than 6 pounds.

"I think a lot of them went to the bank," he said. "I tried to fish the bank in that creek but I couldn't relocate them and it didn't work out."

"On day 4 I knew it was muddy halfway back, so I started at the mouth and in the first couple minutes I caught a 4-pounder on a flat-sided crankbait. I did that for several hours but I never got another bite, then I ran to another creek farther down and threw a vibrating jig on docks. I caught four keepers in the last 40 minutes and my final fish was a 3-something.

"That was a long run (to the launch) from all the way down there late in the day, but I trusted that my Suzuki would get me back," he concluded.

> He dipped the tails of the trailer in JJ's Magic dye (methiolate).

> He used a Luna Sea Elite Pro II Cush-It on the butt of the rod. "It helps with balance and keeping the tip up and it makes the rod more sensitive," he said. 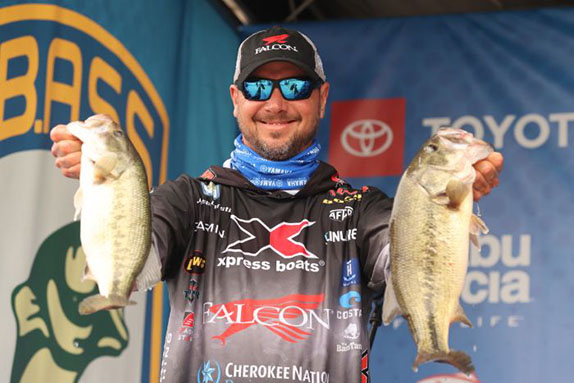 
A bad cast during practice tipped off Jason Christie to a good starting spot.

"I started with it on the third day and they weren't eating it good, and I believe that was because the water was falling," he said. "I'd been catching a few on a spinnerbait, too, and after that I pretty much rode the spinnerbait for the rest of the event."

He employed the blade on a variety of cover types.

"I threw it at docks, rocks, logs – anything in the water," he said. "When the water fell so hard they got on a lot of shallow targets wherever they could."

He stayed in the mid-lake area of Fort Loudoun Reservoir where he'd fished in the 2019 Classic. He caught both of his 4-pound-plus bites on day 4, when he weighed his biggest bag of the event, but lost a couple the previous day.

"One thing that saved the event for me was in practice I was going around a dock and I made a bad cast, and as I was reeling in I caught a fish. I was in five or six feet of water and I used the Garmin LiveScope to look out there and I could see a high spot that ended up being a rock pile. That place gave me three or four fish in the first 15 minutes every day and feed me up to run around and fish the rest of the time."