New Quickly Made His Presence Felt 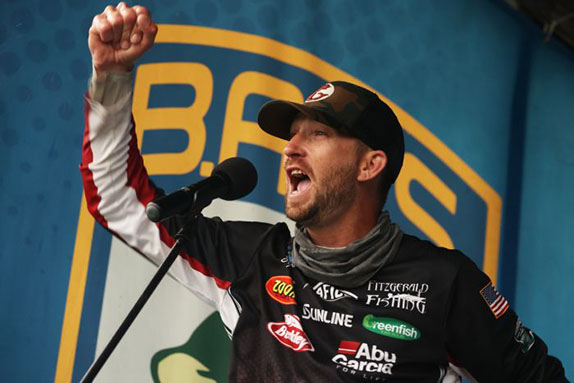 New? Yes, both in name and Bassmaster Elite Series status.

Bryan New, the 2020 Bassmaster Opens Angler of the Year (AOY), made a stunning transition to the organization's top level by winning last week's season opener at the St. Johns River in Florida. The 30-year-old from North Carolina started the final day in 6th place, then caught a 26-04 stringer (the second-heaviest of the derby) to leap-frog the five anglers in front of him and post a winning margin of 9 1/2 pounds.

"It's pretty cool, man," he said a day later. "You only get one shot (at your first pro-level tournament) and that's it.

"It really hasn't all settled it yet and I don't know when it will because we'll be off to the Tennessee River (for the season's second event) next week. I just know it's an awesome experience and I feel very blessed."

Better as he Went

New's bags got progressively heavier throughout the event – 12-00, 20-03, 21-00 and 26-04. His primary tactic was pitching a Zoom Zlinky (a Senko-type bait) to sparse sections of lily-pad fields in 1 to 3 feet of water, which was a program he didn't lock into until the final day of practice.

The Zlinky produced 17 of the 20 fish he took to the scale. The other three were enticed by a Berkley Warpig rattlebait from shell bars in the 5- to 7-foot depth range and two of those were crucial, as he caught them in the final 20 minutes of the fog-delayed first day from a locale near the ramp. Without them, he would've weighed a short bag and eventually missed the cut to the Top 10.

Sitting in 22nd place, he started day 2 in "check mode" (just trying to ensure that he finished the day among the Top 50). Having had just five lily-pad bites the previous day – two of which never made it into his boat – he started on the bars and amassed about 14 pounds within a couple of hours. After moving south to the pads, he had much more action there than on day 1 and ultimately culled his way past the 20-pound mark.

He went with the same game plan on day 3 and ended up with plenty of weight to advance to the final day. He disdained the bars entirely on day 4, however, opting to go directly to the vegetation and stay there.

"I caught a few small ones really quick and then I went through spells for the rest of the day – I'd catch three or four, then go a little while without a bite, then hit another little flurry. I'm sure I probably caught 30 fish again (the approximate number he landed on both days 2 and 3).

His final-day bag was topped by a fish that weighed a couple of ounces less than 6 pounds. He had three others in the 5-pound class, along with a 4 1/2.

"Oddly enough, that 5-14 was the biggest fish I caught all week," he said. "Catching that many fish, I just knew I was going to run into an 8- or 9-pounder, but I never did."

He said that one of the biggest keys to his success was "just fishing what looked right."

"I only caught fish from one place that I'd fished in practice. Wherever I caught them best the day before, I'd start there and fish it real quick, then I'd start hitting (new) places and go slow.

"Being slow and steady and stealthy with the Zlinky was a critical factor. The Power-Poles were a big help with as slow as I was fishing and I even used them on the offshore fish."

> He used the same hook and bait on a 7'3" heavy-action Fitzgerald All-Purpose rod, an 8:1 ratio Abu Garcia Revo AL-F reel and 22-pound Sunline Shooter. "I wanted to go as light as I could get away with," he said. "If it was windy or I was fishing thicker pads, that's when I used the heavier setup."

> New remains employed by a pavement-marking company owned by a buddy whom he met through fishing. "We paint roads, and also sports fields and running tracks," he said. Obviously, I'm not full-time right now, but when I'm home and things aren't as crazy as they are this week, I do go to work."

> He and wife Brittany have an 8-year-old daughter named Braylen.