Mundy's Monster Month Was Something To Behold 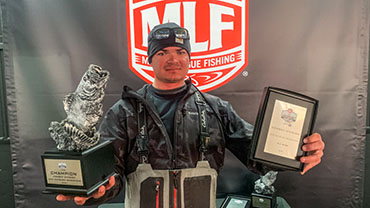 Derek Mundy collected a lot of hardware – and a lot of money – from Sam Rayburn Reservoir in January.

On the day after New Year's, Mundy, a 32-year-old pipeline welder and father of two sons from Broaddus, Texas, weighed a 40-11 stringer to win a single-day BFL event at Rayburn by a 12-pound margin. Then last week he boxed 70-11 over three days to win a Toyota Series derby at the same venue, eclipsing the runner-up by 14 pounds..

His best bag in the most recent tournament was 39-07 on day 2. That quintet included a 13-10 monster (his personal-record fish) and he added a 10-04 the following day.

His BFL stringer was topped by an 11-10 bruiser. The weekend after that, he boated an 11-04 while fun-fishing at Lake Nacogdoches.

The three Rayburn hawgs were all enticed by a Strike King 8XD crankbait. He caught the Nacogdoches fish on a Carolina-rigged worm.

"I've had some good days on the lake, but not huge bags like this," he said. "I've just been doing lots of homework and putting in time on the water scouting – going out there and practicing and getting behind the steering and spending a lot of time idling and trying to keep up with everything that's going on."

Mundy pocketed more than $50,000 combined from his two MLF Big5 victories. The windfall came at an opportune time because he was in need of a new motor for his 2006 Ranger – in fact, he fished the Toyota Series event out of a borrowed boat.

He expected to pick up the new powerplant, a 250-hp Yamaha V Max SHO, this week.

"The other one was the factory HPDI, so I just repowered with the SHO," he said. "Hopefully the new one will last as long as that one did."

He got off to a sluggish start in the Toyota Series derby, weighing just 12-13 on day 1. He more than made up for that with his huge second day, however, and his 18-07 effort on day 3 was the heaviest among the Top-10 field.

He said his biggest fish all came from "hard spots" in transition areas.

He said the big 'uns weren't terribly difficult to get to the boat.

"At this time of year they'll give you a pretty good fight from the get-go, but they give up pretty quick in that cold water. The 13-pounder did come up once and tried to throw the bait, but it didn't happen. They pull hard at first, but they get gassed before long."

The next Southwestern Division Toyota Series event is set for Lake Texoma (March 25-27) before a return engagement at Rayburn (April 28-30). Mundy hopes to fish both, but might not make either due to work commitments that could take him just about anywhere in the country for an extended period of time.

"Last year I had a 2nd in a BFL, a 2nd in an ABA and I won an Angler's Quest early in the year, then it was off to work until June," he said. "That really wasn't a bad deal, though, because there wasn't any tournaments (due to the outbreak of the pandemic).

The warmer part of the year is actually his preferred time to fish Rayburn.

"I've made a good bit of money over the summer and through September. I feel like I really know what's going on at that time and I go in thinking that in most tournaments I'm going to make a Top-5. I always have confidence at any time of the year, though – if you don't have confidence in yourself then there's no need to enter.

"I always feel like I have a chance at Rayburn, even if I'm not really on anything."