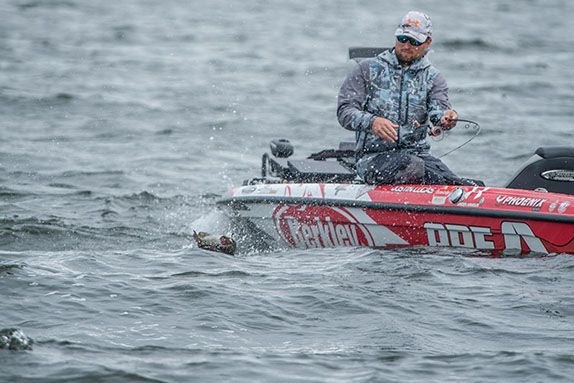 Justin Lucas sees pros and cons to the MLF Pro Circuit's switch to two official practice days instead of three.

When it comes to the number of practice days for high-level bass tournaments, is more always better? As with a lot of things, the answer likely depends on an event's individual circumstances.

Anglers on the this year's MLF Pro Circuit will be limited to two official practice days instead of the traditional three, with the off day between the final practice day and the first day of competition remaining in place. Some like the change, some are ambivalent toward it and others would prefer to have the extra day.

According to an MLF communications official, reducing the number of practice days was the only way the organization could create a schedule that would allow anglers to fish both the Pro Circuit and the Bass Pro Tour and/or Toyota Series, due to the number of events and the way the schedules were laid out.

Here's a quick sampling of some Pro Circuit competitors' opinions on the topic as the season opener at Lake Okeechobee (Feb. 11-14) approaches.

"I really don't have an opinion on it one way or the other. I've kind of started liking the two days fishing the (Bass Pro Tour), but that doesn't have an off day. I'd rather have 2 1/2 days or 2 3/4 and not have the off day.

"It's going to force guys to figure fish out faster. It'll make them a better fisherman, but they'll have to adjust. You can't learn everything you need to know in that amount of time.

"Having just two days on a body of water the size of Okeechobee, if you don't get down there and pre-practice, you can't look at everything in two days. It'll be one day less of pressure on the fish, though, so that part is cool."

"Personally, I really like it to a certain point. I am self-aware that my practices usually follow the same flow – on the first day I find what I end up fishing in the tournament, but I don't really know that yet. Then the second day I explore and don't find anything and the third day I reestablish what I found the first day and hone in. Essentially, I'll have to condense that process.

"As for pressure on the fish, a lot of that's going to depend on the fishery. If it's a brushy-type place like Lake Eufaula or somewhere that the fish are on a hard line of grass, in those situations one less day could be really beneficial. I don't think it's going to be that big of a factor in the majority of tournaments, though. I don't tend to believe that one day of pressure is going to do that much.

"I'm always a fan of making it more challenging; not because I think I'll excel and everyone else won't, but the guys with a strong work ethic who play it smart and develop a strategy will be rewarded. It's my job to be one of those guys.

"I could probably give you a better answer at the end of the year, but if I had my way I'd rather have the three days. With two, I think there's a little bit of an advantage for guys who are somewhat local, like they live within three hours of the lake, because they can go and pre-practice. I could go pre-practice too and fly home, but it's not the same.

"You can't learn a body of water in two days – a lot of times you can't learn it in three. It might force guys to fish only what they know because it's hard to expand and learn more. You might want to go over here and try this or go over there and try that, but the best thing might be to have a game plan and stick with it. It'll be hard to be spontaneous.

"I'd give up the off day to have that third day. Even half a day would give us a chance to see something else, but if you took that away that might (eliminate) and opportunity to do something for a sponsor or visit a high school or a hospital. There's no easy answer."

"I'm okay with it. My main concern is having that off day to get everything ready.

"If it's going to be a big benefit for anybody, I hope it's the guys who've been to a body of water several times and have more experience. A place like Okeechobee ... it's so vast and it's impossible to cover in two days.

"I think the off day definitely helps the tournament weights. In the old days when we had three and even four days, that was tough on a fishery. A shorter practice and an off day helps the fish bite a little better."

"Personally, I like it. In prior years with three days, basically the first day was a waste for me, anyway. What I'd find on the first day of practice rarely ended up happening in the tournament. I felt like I did a lot of riding around and checking things out and I'll have to eliminate that time.

"Guys who are more prepared to succeed – who've seen the lake or pre-practiced – it'll allow those guys not to waste any time once they get there.

"I'm all for it because I think half the time we practice too much. The fishing should be better (during the tournament) with less fish caught and less boats out there in practice."