BACK
A Knack For The North 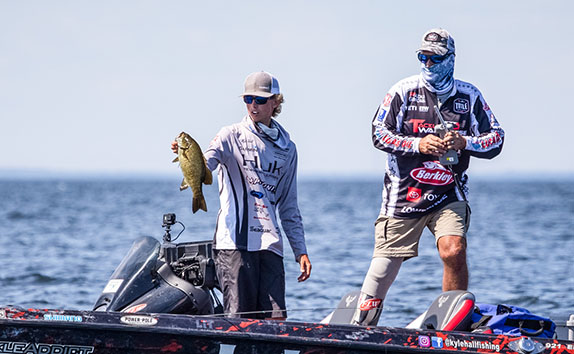 Kyle Hall capped off his superb rookie season on the Pro Circuit with a 5th-place finish at the TITLE Championship.

A bad start in his home state – at a lake he once lived on for half a year, no less – didn't prevent Kyle Hall from putting together an outstanding initial season on the MLF Big 5 Pro Circuit.

The 23-year-old from Granbury, Texas launched his pro career with a 142nd-place finish at Sam Rayburn Reservoir last January. He logged no other placement below 45th for the rest of the campaign, however, and ended up 10th on the final points list, claiming the Rookie of the Year award in the process.

He topped off his sparkling debut season with a 5th-place showing in the TITLE Championship at Sturgeon Bay in Wisconsin.

"After the start I had, I was glad that I was able to pull it together," he said. "My goal starting out was just to make the championship and by the end, I had a shot to win it.

"It could've been better if I (hadn't bombed) at Rayburn, but I achieved all the goals I had and I'm pretty happy with it."

Hall had a major issue at Rayburn that was his own doing – he lost all of his waypoints prior to the start of the event.

"I'd just switched from Lowrance to Garmin and I wasn't really sure what I was doing yet and I accidentally deleted all of them," he said. "I'd found some offshore fish, but they were schools moving around and I couldn't find them in the tournament.

"I never found the grass deal that everyone else was doing. It was kind of discouraging to get started on the wrong foot."

He improved by 97 places (45th) in the next event at Florida's Harris Chain of Lakes, and that finish turned out to be his second-worst. He was 12th at Lake Martin just prior to the COVID-induced three-month shutdown, then 42nd at Chickamauga when action got under way again.

He concluded the regular season with a 9th at the Mississippi River and a 26th at Lake Erie, then posted his Top-5 showing in the championship. The TITLE was contested under the Major League Fishing no-limits, catch-weigh-immediate release format.

Hall doesn't have a lot of experience on Northern smallmouth fisheries, but he's certainly displayed a knack for performing well on them. He won a Toyota Series event at 1000 Islands on his first trip to that part of the country.

"My very first day on Lake Ontario, I caught 23 pounds out of the back of my buddy's boat," he said. "I like video-game fishing and that's pretty much all it is. Especially with (Garmin) LiveScope last year – it made it a lot easier than using the standard sonar I had when I won."

He'd never fished Erie prior to last year's event and made the long, bone-jarring trip to Lake St. Clair (which he'd visited once previously) on day 1. After catching a disappointing bag, he relocated to the big lake on day 2.

"I found three or four spots around the take-off where I caught a few, but I basically spent the second and third days on one spot the entire day," he said. "I found one school that I probably caught 100 fish out of over two days.

"You can graph fish for days out there, but most of them are drum. When you finally find the smallmouth, you can catch a bunch of them."

His goal for the 2021 season is a single-digit finish in the Angler of the Year (AOY) race, which would qualify him for the 2022 Bass Pro Tour (the Top 10 from the combined 2020-21 points standings will receive invitations).

"I enjoyed the format at Sturgeon Bay," he said. "I think on a largemouth fishery it might be a little different for me because you're not fishing schools as often."

> Hall and a good friend are in the process of opening a tackle shop in Granbury called Tri-Lakes Tackle Town. The name stems from the three lakes in the vicinity (Granbury, Possum Kingdom and Whitney) and they hope to eventually have additional locations closer to the latter two.