BACK
Brother Of Micah 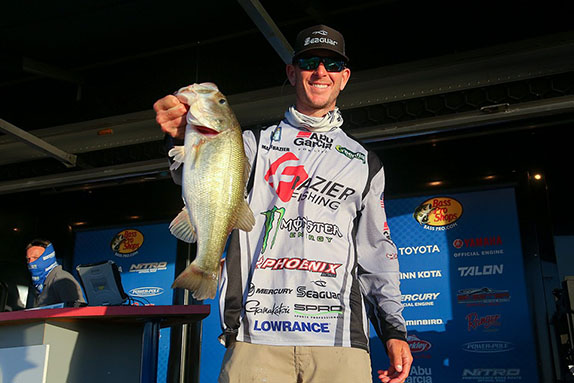 Marc Frazier double-qualified for the 2021 Elite Series via the Bassmaster Opens.

Marc Frazier's second season competing in the Bassmaster Opens got off to an inauspicious start with a 112th-place finish at Florida's Kissimmee Chain in January 2020. The Georgia resident and younger brother of Elite Series pro Micah Frazier came to the sport after a 4-year college baseball career, however, so he was well-acquainted with the concept of putting one bad outing behind him and moving on.

The rest of the year went a heck of a lot better and he became a double-qualifier for the Elite Series, finishing 4th on both the overall points list (Eastern and Central divisions combined) and in the Central race. This year, he and Micah will join Canadians Chris and Cory Johnston as brother tandems on the tour.

The lackluster showing at the Kissimmee Chain ended up helping the 27-year-old's cause on the overall side because it could've been a lot worse – there were 225 anglers in the field and he finished just about dead in the middle despite just a single day of practice.

"My boy was born (less than a week) before that and I wasn't even going to go," he said. "I showed up and didn't get on anything in the one practice day I had."

He did manage to catch full sacks on both of his competition days, although the weights were unimpressive (7-12 and 10-11).

"I was lucky to have limits and end up where I did, but I knew I was going to have to step it up for the rest of the year if I wanted to qualify and luckily I never had a bad finish after that. I wouldn't trade any of it if I could – it all worked out just fine."

Left it All on the Diamond

Frazier was a 47th-round draft choice of the San Francisco Giants coming out of high school, but opted to attend Chipola Junior College in Florida. From there, he transferred to Nichols State, where he obtained a degree in business, and played his final year at Auburn in 2016. 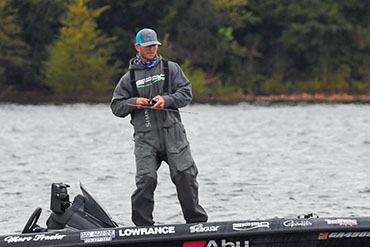 
Frazier rattled off five straight Top-30 finishes after beginning the year with a 112th-place showing.

He loved fishing as a kid and had a jonboat that he used frequently in college, but didn't become a serious tournament competitor until he was done with baseball.

"I was always pretty good at it, but ever since I was 4 I played baseball and I felt that I owed it to myself to be 100-percent in on that," he said. "I was always wanting to go fishing, but my dad always said I had plenty of time to do that if I didn't make (a career out of) baseball, and here I am."

He competed on the Alabama Bass Trail for a couple of years and spent one season as a co-angler in the now-defunct Northern Opens. He fished the Central Opens from the front of the boat in 2019 and fared pretty well, landing at No. 13 on the final points list.

After his bomb at the Kissimmee Chain last year, he bounced back with five straight Top-30s, the best of which was a 9th at Lake Hartwell. He concluded the campaign with Top-50s at Lewisville Lake and Lay Lake, respectively.

Qualifying for the 2022 Bassmaster Classic will be Frazier's primary goal for his rookie year on the Elite Series.

"I feel like that's realistic," he said. "Doing that would set myself up to achieve some smaller goals, like having some good finishes and fishing clean."

Neely Henry Lake in Alabama is the only venue on the schedule that he has much experience on. He's been to Lake Champlain once – he made a trip up there to fish as a co-angler in an FLW Tour event when Micah was competing on that circuit and didn't want to go alone.

He and Micah will travel together and share practice notes. He said that to this point, his brother has been more helpful as a motivational coach rather than a source of specific fishing information.

"He's helped me a good bit with my confidence," Marc said. "For example, I might ask him what he thinks a tournament at Sam Rayburn (Reservoir) will be like, knowing he's been there, and he might say that he didn't do any good or he was there at a different time of year and whatever he told me would just mess me up. He'll point out that I've been doing well and I need to just go and keep doing what I've been doing and trust my instincts.

"Confidence is the big key and I learned that real quick in baseball. If you don't have it in yourself, you're already defeated."