BACK
Explore The Shallows 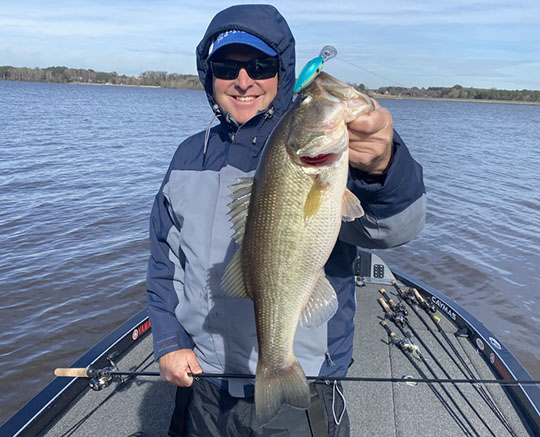 One of the advantages of fishing muddy water in the wintertime is that you often have the lake to yourself.

My dad told me in a recent phone conversation that 2020 was the wettest year since the 1800s for North Carolina (I asked him if he remembered that year). A few months ago, we had 9 inches come down in just half a day. One town had 38 inches of rain! I have never seen so much water moving everywhere – even ponds in the middle of the woods now have current.

Hopefully, it will settle back down a bit and the water will stabilize. In the meantime, if you live in a state like North Carolina that's been hammered by rain, you'll have to get accustomed to fishing cold, muddy water.

One thing I've read over and over is to avoid cold, muddy water. This year in many areas, you just can’t avoid it.

I've always enjoyed fishing in the winter more than any other season, since not as many boats are on the water and fish are more easily patterned. I’ve found that water temperature plays the biggest role in determining just how tough it is (or how good it is), and it matters more where the temperature has been vs. which day you decide to fish.

A day when the water temperature is 48 degrees and muddy, but was recently in the low 40s, can be better than a day with the water temp is 50 degrees coming down from 55. Yes, 42 degrees and below slows fish down a lot, especially in the muddiest of conditions, but they can still be caught.

I would caution, when you get to the lake and judge the water based on looks, it's sometimes not as muddy as it appears. Some lakes naturally have a brown stain to them in the winter, when there is little phytoplankton to keep the water green. So even if it appears muddy, it may be good. However, mud swirling around and thick sediment in the water is bad news no matter the temperature.

Traditional winter locations like steep drops and around schools of baitfish still apply, but focus on shallower areas nearby, especially if the sun is out. Even in really cold water, bass can move really shallow and it's pretty much the only place you can catch them, anyway, if the water is heavily stained. You may see lots of bait on your depth finder hovering in deep water, and even some gamefish around them, but if you have spent any time trying to catch suspended fish in muddy water then you know the effort is almost futile. 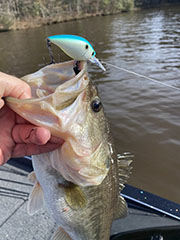 
Citrus shad is a good crankbait color when the water is chilly and heavily stained.

The best spots are sunny points and flats near traditional deep areas as well as channel-swing banks. There will be multiple fish around the good places – very rarely are they alone. You can still catch fish a little deeper, as long as you are making contact with the cover they are in or the bottom, but shallower is normally better. Bass can feel your lure with their lateral line, but they need to see it to eat it.

"Shallower than you think" is the deal for the mud. I know this and I’m still surprised to some extent when I catch a bass in a foot of 46-degree water in January. Often, some of the best winter days have fish up in just 1 or 2 feet of water. This almost always occurs with water of at least 8 feet nearby, allowing for how deep your trolling motor is in the water, too. I’ll rarely even consider water deeper than 8 feet if it's muddy. Not saying it couldn’t happen, but it rarely does.

While a normal winter would have most of us using jerkbaits and umbrella rigs, the mud calls for some adaptations. A small crankbait is probably the best bait for cold, muddy water on any given day.

A square-bill crankbait is not normally on my winter list, but when the water is really muddy, one of my best baits is the Yo-Zuri Squarebill. It has flat side, and fishes that shallow rock really well. I like shad colors, with citrus shad being my favorite, but I always experiment with red crawfish and chartreuse as well.

I’ll usually have the square-bill rigged and also a Hardcore Crank MR crankbait was well, for when the fish are 5 to 7 feet deep. Citrus shad is by far my favorite in the deeper diver in dirty water. Most fish and baitfish will turn pale when the water is muddy and the citrus shad just has that pale look, with a splash of color to get their attention. Both baits I reel slowly and pause and pull with my rod through cover and rocks.

My second-best bait is a 1/2-ounce Eco-Pro Tungsten Football Head jig with a Culprit Flutter Craw trailer. Black and blue with a black Flutter Craw gets the nod here. I cut the Flutter Craw in half and thread it up the shank. I use this for those days when the fish just will not react to the crankbait or I simply mix it in on good stretches or points. A big tree on the right bank can also hold some pigs.

Other baits to consider would be a spinnerbait with a Colorado blade (or blades), a bladed swim jig or a Rattl N Vibe, depending on where you're fishing and the conditions that day. On occasion those big ones move really shallow and can actually be spooky to noisy lures up there. Those fish are actually just sunning and not feeding, but can be tempted. The best way to catch those fish is with small swimbaits or long-casting a football jig. Waiting until the winter "magic hour" (about an hour before dark), when the water is warmest in the shallows, will get you some nice fish, so plan on fishing until dark for the best opportunities. The lightest of wind can trigger sunning fish to feed, too.

While we always want to catch a bunch of fish, cold, muddy water can be feast or famine. On some days they only feed in really small windows once or twice a day. If you are not where they are, you may go home without catching any.

Other days you can really mop up on them, catching dozens, and it can be great fun having the lake to yourself and running a pattern without competition. I’m willing to take the chance of catching nothing for that one special day every so often.