BACK
Lots Of Trips To The Bank

Monsoor's Season Was One For The Ages

(Editor's note: BassFan will suspend feature publication during the holidays as it does each year, although important breaking news will still be reported. We wish everyone a joyous holiday and we'll be back after New Year's.)

Many BassFans are familiar with Tom Monsoor's FLW Pro Circuit victory on his home waters – the Mississippi River out of La Crosse, Wis. – last July. Some may not realize, however, just how good his overall 2020 season was.

It was undoubtedly the best campaign in the history of the sport by an angler over age 70. Chances are good that it'll hold that distinction for a long time to come.

If not for a major bomb in the opener at Sam Rayburn Reservoir in January, Monsoor would've been a strong contender for the Angler of the Year title. Even with that 148th place finish on his ledger and a schedule shortened to six events by the COVID-19 pandemic, he ended up 15th on the final points list.

"I have tournaments where (stuff) just doesn't work," he said. "I found more fish there this time than I did the year when I did really good. I was seeing schools out deep and I was throwing my jig out there and they were just clobbering it on every cast. I wasn't catching giants, but I didn't fish them – I'd catch a couple and move to the next spot and catch two and the next spot and catch one. I didn't want to hook them.

"Then when the tournament started, they were gone. I think they went deeper, to be honest. The second day I didn't weigh in – I had one little fish and it was windy and I wasn't going to kill myself running across that lake. Then at the very end of the day I moved a little deeper accidentally and I ran into them 40 feet deep when they had been in 12 to 15 feet. It was (a bite) every cast again; it was easy."

No Stinkers After That

Monsoor bounced back with a 57th-place finish at the Harris Chain of Lakes that earned him a $7,500 paycheck. He pocketed at least $10,000 in every event the rest of the way and the $125,000 he garnered from his home-field victory pushed his career earnings total with FLW past the $1 million mark.

He had a 7th-place finish at Lake Martin and an 18th at Lake Chickamauga. His total haul from the abbreviated Pro Circuit schedule was $173,500 – by far the highest of his 16 full seasons at FLW's top level.

His last-place performance in the 50-angler TITLE Championship at Sturgeon Bay was a big disappointment – it was another case of fish disappearing after an otherworldly practice.

"If you could've seen me in practice you would've sworn I was going to win that thing – it wasn't going to be close," he said. "I was swimming a football jig, which is what I love to do, and I found (quality fish) in rocks in 50 different places. I'd catch a 4-pounder, then make two or three more casts and it'd be the same thing.

"Then the first day of the tournament I never caught a fish. When it goes bad on me, it goes really bad. There's no middle ground."

Monsoor has spent much of the fall and winter making jigs of all types (he said he produces about 30 per day on average). He's eagerly looking forward to the start of the 2021 campaign at Lake Okeechobee in February – a couple of weeks after his 72nd birthday.

He had a quadruple-bypass heart operation a few years back and two subsequent heart attacks. There are activities that tire him out these days (carrying a heavy bag of fish from his boat to the tanks has proven especially difficult recently) and he says that launching and loading his boat is a much bigger hassle than it used to be.

Nonetheless, he's made no retirement plans.

"I'll keep doing it until I can't," he said. "I'm still lifting weights and fishing every day and talking stupid – I haven't grown up yet.

"I never thought I'd live this long and I don't know how I'm not dead. I've fallen through ice and wrecked motorcycles – one time I was going to see a girlfriend in Madison and there was a telephone wire that had blown down across the road and I hit it with my headlight going 60 miles an hour. If it'd hit me instead of the headlight, it would've cut me in half.

"I feel like the luckiest guy in the world to be able to do this." 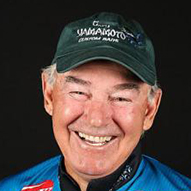