BACK
They're Often Quite Large

Waking Up A Wintertime Bucketmouth 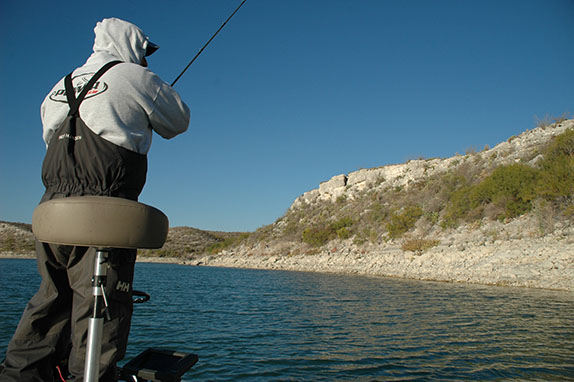 Pursuing bass during the coldest period of the year isn't always comfortable, but it can be highly rewarding.

The depths of winter – even in the lunker-rich Lone Star State where I live – can be a trying time to fish for largemouth bass. The days are shorter, the water is colder and when the Christmas and New Year’s Day holidays approach, bass seem to be settling down for the long winter’s nap that Clement C. Moore wrote about in his timeless classic "A Visit from St. Nicholas.”

All hope isn’t lost, however, even if the local bass seem to have pushed the snooze button until next spring. Because while it might not involve a clatter out on the lawn or visions of sugar plums dancing around, adventuresome anglers can still head outdoors and catch an impressive bucketmouth.

For proof of that statement, consider that the 18.18-pound state record largemouth bass for Texas, caught by crappie angler Barry St. Clair as he sought a wintertime limit of slabs, was brought to hand on Jan. 24, 1992 at Lake Fork. But don’t stop looking there, because there’s plenty more evidence that some of the year’s best big-fish-catching opportunity isn’t during the springtime spawn, but instead when Old Man Winter has settled in for a spell.

Intrigued? Good. Because a look at the hallowed Top 50 largemouth bass list maintained by the Texas Parks and Wildlife Department shows that a total of five bass in the state’s Top 10 ranging from have been caught during January (1) and February (4). And there’s a near-miss caught at the end of November and another caught on March 1.

Expanding that idea out to the Lone Star State’s Top 20, three more lunkers (up to 16.13-pounds) have been caught in the dead of winter (1 in January and 2 in February). And looking at the rest of the Top 50 list, another 12 Texas lunkers have been caught in December (1), January (5), and February (6).

If you’re doing the math at home, that’s a total of 20 lunker bass ranging from 15.45 to 18.18 pounds, all caught at a time of the year when the water is at its absolute coldest and the local chamber of commerce staff is vacationing somewhere tropical.

No wonder anglers like Bass Pro Tour veteran Kelly Jordon, one of the few pros who's won events on the Bassmaster Elite Series, the FLW Tour and Major League Fishing circuits in the course of his career. is a big fan of wintertime angling. In years gone by, that was especially true on his former home water, the famous Lake Fork, which lies about an hour and a half from his Flint, Texas home.

You would be a big fan of wintertime fishing, too, if you had caught the stringer of December bass that Jordon did on a Fork years ago while using a Sassy Shad-style bait and a jigging spoon in 30-feet of water.

Keep in mind, however, that such numbers of big fish are the exception rather than the rule during the winter months.

“It’s not a numbers time of the year, since the bass fishing is tough anyway at (this) time of the year,” noted Jordon, who has four B.A.S.S. wins, one FLW triumph, and one MLF Challenge Cup victory to his credit. “But if you do find them, they’re usually grouped up pretty good.”

The trade-off for the lack of numbers is the scale-tipping weight and girth of these wintertime bass.

Regarded as one of the top big-fish catchers in pro bassing, Jordon indicates that such an observation is generally true because female bass are not going to lose any weight since the water is cold and they’re feeding for the upcoming) spawn.

“They’re not even football-sized at this time of the year, they’re basketball-sized bass,” Jordon chuckled. “It’s kind of like trophy deer hunting – you may not see a lot and the weather can be tough, but that’s when you can get it done. If I was a big-bass hunter in Texas, I would fish December through February.”

In big bass waters all across the South, Jordon’s idea holds merit—if you’re willing to leave the warmth of home, that is. If so, where do you begin?

The first place, of course, is safety, since often there isn't a second chance for anglers out on the water during the depths of winter. Once an angler has made safety his or her top priority, the next step to enjoying a sizzling day of wintertime big-bass action is to watch for stable weather.

Jordon loves to get out on the water about 5 days after a frontal passage. Aside from the obvious safety reasons of fishing in stable weather, there’s also a subtle piece of angling advice here, too.

“All that you’re doing is getting in front of the next front,” he said. “Typically, the best day of fishing in the wintertime is in front of or right as a front is moving in.”

The next key to a successful wintertime trip is to fish in the right spot. While some anglers might think of winter as being a season when most big bass are found sluggishly inhabiting deeper water, Jordon has at times found otherwise.

“Some of my best days of the year on Fork were the coldest days when it was snowing and I was fishing in a foot of water."

If that doesn’t seem to make sense – big bass up shallow while temps are cold and snowflakes are flying – the East Texas pro says to think through the entire process of what’s actually going on.

“We know that cold air is dense and sinks and hot air is light and rises, right?” Jordon queried. “Well, the warmest water is at the surface of a lake most times in the winter. The cold water is dense and sinks. What you’re going to have happen (at times) is those fish will go shallow, although they’ll still be in main-lake locations that are still accessible to deep water.”

That’s why you can catch them in a snowstorm in 1 foot of water burning a lipless crankbait like a Lucky Craft LVR D7 in a mad craw color.”

Now just in case you think that Jordon is suffering from a case of severe frostbite in regard to his cold-weather, shallow-water bite hypothesis, think again.

“We did some sampling (a few years) ago in December or January (on Lake Fork) collecting fish for a Largemouth Bass Virus study,” retired TPWD biologist Kevin Storey told me right after I had interviewed Jordon on the topic of wintertime bassing. “We shocked up some big bass in 2 or 3 feet of water.

Sounds like Jordon has been onto something with his shallow-water wintertime big bass idea. But whether you choose to target big bass shallow or deep, lure selection in terms of size, color and proper presentation are additional keys to this angling puzzle.

Jordon indicates that the craw color is especially important at this time of year because big female bass are loading up on calories in preparation for the coming spawn and will often key on protein-rich crawfish. And since bait balls of shad seeking warmer water are always fair game to wintertime largemouths, shad-colored lures are also an important mainstay when the water is cold.

Also important is the size of a lure. In most cases, that means bigger baits at the end of your line.

“Fish are looking for a big meal at this time of the year,” said Jordon. “You’re using big-fish baits like jigs, lipless crankbaits, slow-rolled spinnerbaits and suspending jerkbaits.

A key principle for using any bait in the winter months is a S-L-O-W presentation. Get the bait into the fish’s strike zone, maintain it there as long as possible and then give the lure enough tantalizing action that the big bass can’t help but eventually react with a quick strike.

Got all of that down pat? Good. But keep in mind that the final key to successful big-bass angling opportunities during the winter months is to be tough-minded out on the water.

“You’re not fishing for a lot of bites and you’ve got to know that’s what you’re doing before you go,” said Jordon. “You’ve got to be a little mentally tough. You know that if you do get bit, however, chances are it’s going to be a pretty nice fish.”

That’s all the reason in the world why a bass angler needs to bundle up and go back out into the cold, even if he’d rather be sipping hot coffee or cocoa by a crackling fire. Because for those willing to burrow deeper into the cold-weather Gore-Tex and fleece, a wintertime day on the water just might provide a chance to catch a bass that would cause even old Santa to pause from his busy holiday season chores.

And that’s something worthy of a real belly laugh, a “Ho, Ho, Ho!” big bass moment if ever there was one!