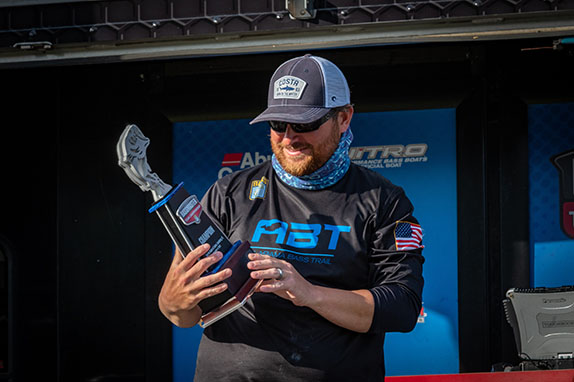 Jordan Wiggins won the Bassmaster Team Championship Classic Fish-Off by a margin of more than 8 pounds.

Jordan Wiggins claimed the final berth for the 2021 Bassmaster Classic by winning the Classic Fish-Off over the weekend at Florida's Harris Chain of Lakes. The slot could just as easily have gone to fellow Culllman, Ala. resident Wesley Sams, his partner in a successful run at the Team Championship the previous 2 days at the same venue.

The key to both victories was a single stretch of Kissimmee grass that had eelgrass in front of it at the junction of Lake Harris and Little Lake Harris. Wiggins and Sams played a game of paper-rock-scissors the night before opening day of the Fish-Off to determine who'd get the stretch for the individual portion of the event, with Wiggins taking two out of three.

Wiggins went with scissors in the deciding round to slice up Sams' paper play.

"I was thinking the whole time that whoever won that game was going to the Classic," Wiggins said.

His 31-09 total over 2 days gave him the Fish-Off victory by more than 8 pounds over runner-up Andy Walls of Minnesota (Sams ended up 3rd). The vast majority of that weight came in the opening round when he boxed 22-09 – a haul that included an 8 3/4-pound bruiser that was definitely the biggest bass he'd ever weighed in competition and perhaps a lifetime best.

"We catch 3- and 4-pounders back home (Smith Lake is his home waters) and I'm not used to those 8s," he said. "My marshal was taking video of it and I was telling him I'd never caught one this big and I didn't know what to do. I'll give myself a pretty good grade on landing it – it all went down pretty smooth."

Prior Trip was Helpful

The Wiggins/Sams duo, who qualified via the Alabama Bass Trail, competed in the 2018 Team Championship at the Harris Chain, registering a 30th-place finish. From a technique perspective, they fished almost identically to how they had on that prior visit – throwing ChatterBaits in grassy places.

"This time we found a different area where bigger fish were," said Wiggins, the younger brother of MLF Bass Pro Tour competitor Jesse Wiggins. "We changed up the color of the baits a little bit – this time they wanted white with a silver blade (they'd used green-pumpkin shad last time). I think that blade blinging from the sun a little bit helped us get a few bites."

The key stretch ran for approximately 100 yards and the water was in the 6-foot depth range.

"The big fish would sit in the shade of the Kissimmee grass and you had to go right down the edge, just ticking the bottom of the grass. That's when they'd load up on it. 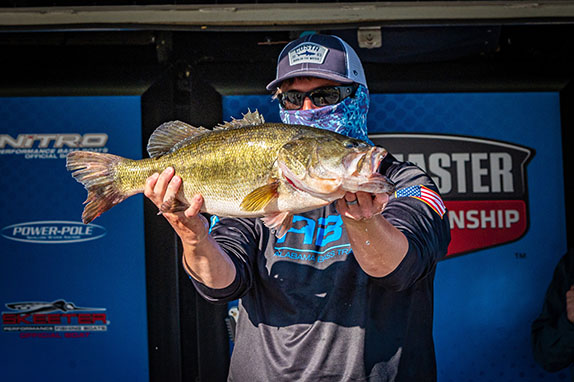 
This 8 3/4-pounder staked Wiggins to a huge lead after day 1 of the Classic Fish-Off.

"It was important to be really precise with the casts. They really weren't biting a ChatterBait that good, but we could finesse it and deflect it off stuff and pull it out of the Kissimmee grass and give it a nudge and that would kind of make them react to it."

Two different brands of electronics contributed to his victory. He employed the SideScan and DownScan features of a Lowrance unit to find the eelgrass and a Garmin Panoptix LiveScope system to determine the location of individual fish.

"Not in 100 years would I have caught the 8-pounder if I didn't have that Garmin," he said. "I could see fish 30 feet away that I otherwise wouldn't have known were there. On the first day (of the Fish-Off) I had 12 pounds or so and I was going back through a place that had eelgrass in front of the Kissimmee grass. I'd been watching the Garmin so if I saw anything that moved, I could cast over there. I'd probably made a hundred casts doing that and never gotten a bite.

"Then I saw it again – there were three bubbles moving on the Garmin and I fired the ChatterBait over there and cranked it two or three times and the big one ate it. I still would've won without that fish because I would've had at least a 3-pounder (in its place), but it chilled my nerves to have that much of a lead."

His 9-00 haul on the final day was far less than half of what he caught in the previous round and barely more than his bruiser weighed by itself, but it was plenty to hold off the other five competitors who'd advanced to that stage of the event.

> The 29-year-old Wiggins makes his living as an HVAC contractor. He and wife Whitney have three children – Jace (7), Emma (4) and Caroline (15 months).

> He'd like to someday join his brother as a tour-level competitor, but the right situation would have to unfold. "If I've got the funds, I'll do it, but I'd never put my family in a bind to do it," he said.