McKinney Adapted With The Fish Each Day 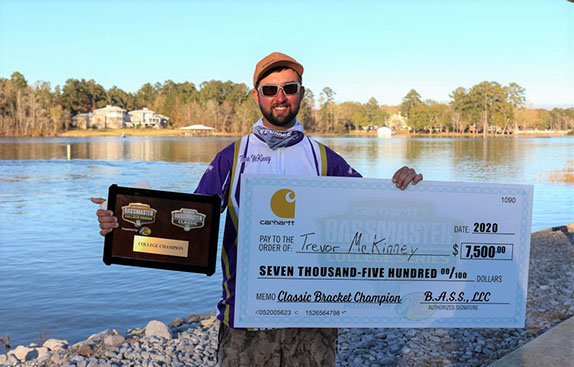 Trevor McKinney gained a birth in next year's Bassmaster Classic with his victory at Lay Lake.

Trevor McKinney may still be a collegiate angler, but he displayed tour-level versatility and decision-making skills en route to winning the recent Bassmaster College Classic Bracket at Lay Lake in Alabama.

A senior at McKendry University in southern Illinois who'll graduate with degrees in special education and elementary education next month, he defeated teammate Blake Jackson by a little over a pound in the championship round with an 11-11 stringer consisting entirely of spotted bass. He employed an underspin to catch the event's heaviest bag (12-04) in the opening round, then threw a jerkbait the following day and crankbaits in the finals as the fish continued to move and alter their preferences.

The victory garnered him a spot in next year's Bassmaster Classic, which will be held March 19-21 at Lake Ray Roberts in Texas.

"It's always been a dream of mine to make the Classic," he said. "I grew up watching (the Bassmasters) on TV and I've fished tournaments with my dad and grandpa since I was a little kid. I've always wanted to work my way up and make a living out of this."

He'll get an opportunity to qualify for the Elite Series next year, as B.A.S.S. will cover his entry fees for all eight Opens and provide him with a boat and truck to be used throughout the season.

"I definitely want to go pro in fishing," he said. "If it doesn't work out, I'll go into teaching as kind of a backup plan and I'll be able to fish in the summer."

He's fished in Texas on a couple of occasions, but never at Ray Roberts. He hopes to make a pre-practice trip when his school obligations conclude in a couple of weeks.

"I feel really good about the Classic," he said. "I know (the Elite Series pros) are super-good, but I'm confident that I can compete."

Mixed it Up Well

McKinney had been to Lay once before – for a Bassmaster Wildcard event in 2016 – but that was a springtime tournament that provided him with nothing useful for the Bracket competition. The Bracket anglers got just a single day of practice and he said the bite was "totally random."

His bags on the first 2 days were both comprised of four largemouths and one spot. The majority of those came from the back of a single pocket where a big population of shad was swimming in shallow water.

He did his opening-round damage late in the day – he had just one small keeper in his livewell when he arrived at the pocket at noon. His first offering was a ChatterBait, but the bass showed no interest.

He switched to the underspin with a small swimbait trailer and caught a solid keeper on this third cast. He compiled his derby-best haul in the day's final 2 hours.

The bites he generated on the second day were much smaller and he weighed just 7-12, with most of his action coming on a jerkbait. He surmised that the cooler nights were prompting the bass to start migrating back to the main lake.

With the aid of his electronics, McKinney discovered a substantial number of fish on the point leading into the pocket on the second day, but had no success in getting them to bite. They were still there on the final day – most of them sitting on a single hard-bottom area about 15 yards off the point – and he caught three on a jerkbait.

A "gut feeling" prompted him to put down the jerkbait in favor of a Rapala DT6 crankbait and he caught five that were all bigger than any of his jerkbait fish. When that action dried up, he moved to a deeper bank and made two culls with a Rapala DT10 that accounted for his winning margin.

“It was different for me every day,” he said. “If I had come into the tournament with a mindset to do one thing, I wouldn’t have caught them.

"I definitely consider myself pretty versatile. I definitely like fishing shallow water better than deep, but this time of year you have to be able to adapt because the fish are changing so much from fall to winter."