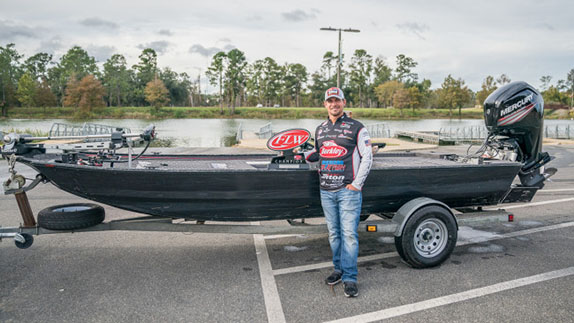 Keith Poche didn't even know that the Lake Seminole Southern Toyota Series event was happening last week until a few days beforehand – he found out about it during a casual conversation with a guy who knew someone who'd be competing. Then he felt compelled to make a practice trip (the lake is about a 3-hour drive from his home in Pike Road, Ala.) before finding out whether he could still get into the field.

His initial visit was promising, there were openings on the pro side due to an excess of co-anglers and the Major League Fishing competitor ended up winning the derby with a 3-day total of 46-06. The triumph netted him a cash prize of just under $32,000.

Poche didn't have a lot of prior experience at Seminole, but he recalled how much he'd enjoyed competing in a Bassmaster Southern Open there in the fall of 2010.

"I didn't win it, I had a 20-something-place finish (actually 22nd), but it was really fun," he said. "I loved going up the Flint River through all those rocks and catching the shoal bass.

"The little knowledge of the lake that I do have, I know you can be competitive in the river at this time of year, so when I found out they were having it I got excited and I wanted to fish it."

Poche got up at 2 a.m. on the Monday prior to the tournament and made a trip to the Flint, launching his 17 1/2-foot aluminum boat with a 90-hp outboard far above the lake. The shoal bass didn't really show themselves, but he caught between 14 and 15 pounds worth of largemouths.

"I got back home that evening and then I didn't fish Tuesday," he said. "I called (FLW senior director of tournament operations Daniel Fennel) and he said there were some co-anglers on the waiting list and I could go online and pay my money."

He drove to Bainbridge, Ga. on Wednesday and put in at the tournament launch site to ensure he could make his run up the Flint and back. It consumed more than an hour in each direction and he determined that his small boat was just barely capable of holding enough fuel to complete the 85- to 90-mile round trip.

"I'm a guy who likes to fish fresh water – I don't want to be around other people," he said. "Only one other guy, Jim Murray, went as far up as I did and he made the Top 10 as well."

Poche said the water up there was flowing fast and had some stain to it, which seemed to cause every largemouth in the vicinity to move tight to the bank and set up on some type of current break. In addition to plenty of large rocks, there was an abundance of cypress trees that also served that purpose.

He caught most of his fish pitching a green-pumpkin Berkley PowerBait Pit Boss into the slack water behind the pieces of cover. Sometimes he was forced to make a lot of pitches between bites.

"I couldn't sit still and pick a place apart; I had to cover water as fast as I could but still have the ability to pitch the bait up there," he said. "I'd pitch it and pop it once or twice, and then pull out and go to the next one. A lot of the bites came on the initial fall because the fish were set up there and waiting.

"Every day I hit new banks and I'd criss-cross over every so often. I don't think I ever caught a fish from the same spot twice."

Pond to the Rescue

Poche amassed 17-14 on day 1 to settle into 3rd place and dropped one position the next day with a 13-02 stringer. He wouldn't have made the Top-10 cut had he not made three culls from a small pond near Bainbridge on day 2.

"On the final day of practice I was on my way back down and I was looking at (Google Earth) on my phone trying to find a sneak hole," he said. "I saw this little pond that was really shallow and narrow and I pulled in there and caught a 5-pounder on the spinnerbait and shook off a couple more.

"On the second (competition) day I only had 8 pounds when I left upriver, but I knew I had that place in my pocket. I caught a 4-pounder and two other good ones that saved me; they replaced three dinks."

He started the final day trailing leader Dillon McMillan by more than 6 pounds, but McMillan managed just a 5-12 limit. Poche's 15-06 stringer was tops for the day and gave him the win by 13 ounces over runner-up Mikey Keyso Jr.

> Poche said that his Bob's Machine Shop jackplate and low-water pickup nose cone were critical for traversing over the rocks in the Flint. 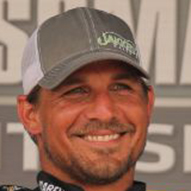