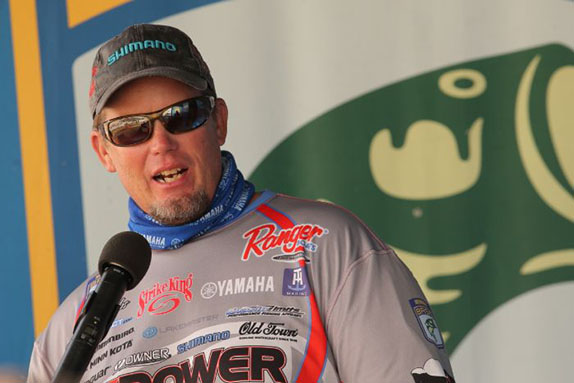 Keith Combs fished in the manner that's been so successful for him in past events at Lake Fork.

The 2nd- through 5th-place finishers at the recent Toyota Bassmaster Texas Fest could only watch in awe, along with everybody else, as Patrick Walters turned the event into the biggest blowout in Elite Series history. Nonetheless, they helped to showcase the renowned lake during a time of year when the bite is at its toughest.

The quartet relied primarily on moving baits, but each threw something different and the depths that their fish came from varied widely. Following are some details of their programs.

Keith Combs weighed 110 pounds at Lake Fork in just 3 days in May of 2014 when this event was known at the Toyota Texas Bass Classic and featured the top anglers from several circuits. He had an uneven 2020 campaign and needed another win to qualify for next year's Classic, but came up one place short – albeit by a massive margin.

He fished in the same manner and in many of the same places that had produced success at Fork in past events. A Strike King 6XD crankbait enticed the vast majority of his bites.

"Timing was really key," he said "It was so crazy; I fished one place on the second day three times without a bite and the fourth time I caught a big one and two other nice ones."

He started out with seven places he was rotating through, but eventually whittled that to five. He was around timber, but it wasn't real thick – he had to be able to get the big crankbait near the bottom. Each place featured a bend in the creek channel.

A lot of times he'd position his boat in 18 to 20 feet of water and throw up to 6 feet, then work the bait down the drop. Some bites came early in the retrieve while others didn't occur until the bait was almost back to the boat.

"I started to understand that I had some really good places, but it was critical to be there when the fish were there. I'd go in and if I didn't catch anything, I'd move on. That was honestly very hard to do because bites were so few and far between. I had to be persistent and keep coming back."

> He swapped out the bait's stock hooks in favor of size 1 Owner STY-35 trebles. 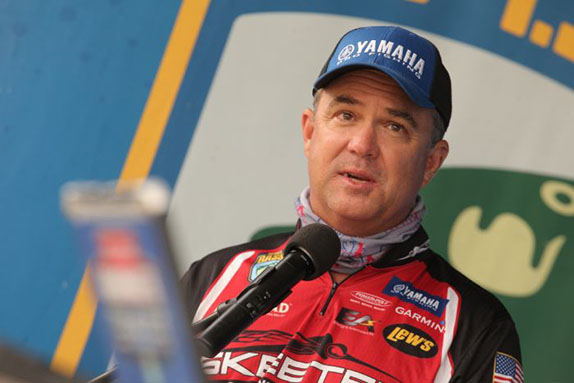 Jay Yelas posted his highest finish since he was also 3rd at the Kentucky Lake FLW Tour in June 2011. He primarily achieved it in old-school fashion, throwing a spinnerbait at woody targets in the backs of creek.

"It's a decades-old fall pattern," he said. "I used to live in east Texas and it was always a strong pattern this time of year, so I went looking for that and I got it going on a little bit," he said. "I was getting about six bites each day (in practice) and that was better than a lot of guys I talked to, so I knew I had something going."

He was one of only four anglers to weigh a limit on all four competition days.

"It was a real shallow bite in about 1 1/2 feet of water on various types of wood cover – docks, brushpiles, laydowns, stumps and fence rows. For has so much standing timber and a spinnerbait is a good option for the fish on the shallow stumps."

He employed a 1/2-ounce spinnerbait on the shallow cover. On deeper docks (4 to 8 feet) with brush, he slow-rolled a 3/4-ounce version.

He caught a few good fish – including a 6-pounder on the final day – skipping a bladed jig with a white Yamamoto Zako trailer under docks.

> He switched to white blades under the cloudy sky of the final day. 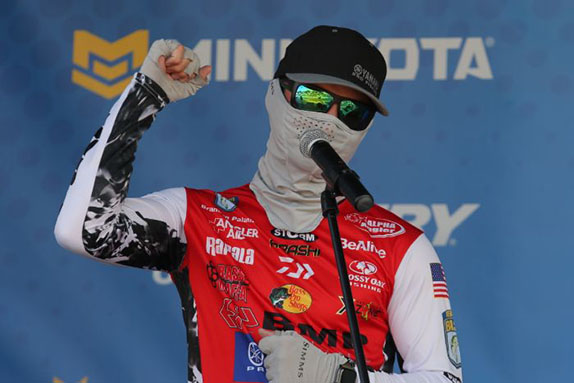 From a final-placement perspective, Brandon Palaniuk came relatively close to his third victory of 2020. Not weight-wise, however, as he ended up more than 35 pounds behind Walters.

"The biggest thing was I'd never really fished Fork at this time of year, so I had to figure out how the fish positioned themselves, what they lived around and how they really use that body of water. I spent a lot of time idling (during practice), looking around out deep, at the mid-depths and shallow. I was trying not to be married to any one thing.

He waypointed half a dozen places, but only three ended up being productive during the tournament. Those had fish that remained group up, whereas at the others they were suspended in timber or more widely dispersed.

"It seemed like when they got grouped up they were more aggressive. I could see them on my (Humminbird) MEGA 360 when they slid up on the shell bars to feed and I could almost call my shots."

He caught about half of his fish on a swimbait and the others on a Rapala DT14 crankbait. He enticed the biggest one he weighed – a 6-15 – on a DT16.

> He threw the penguin and cisco baits under the bright sun of days 1-3 and Caribbean shad during the cloudy final round. "We had a lot of low fog that hung around longer and it seemed like they reacted better to the brighter color." 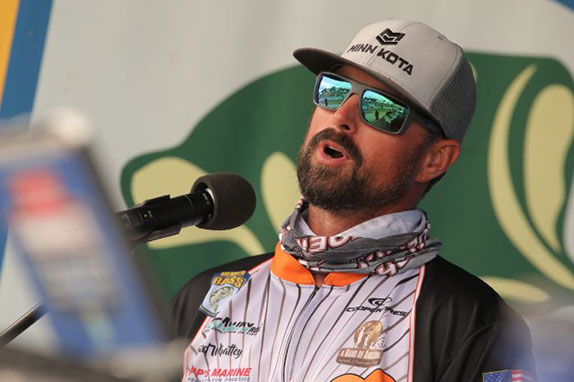 
Brad Whatley fished extremely shallow with a vibrating jig and a square-bill crankbait.

Brad Whatley is a Texan, but he's not overly familiar with Fork.

"I've got some experience from 15 or 20 years ago, but it was night-fishing and that doesn't really count," he said.

He divided his practice time about evenly between deep and shallow water.

"I caught a couple of big ones out deep, but it was just so inconsistent," he said. "One of the things I do know that goes on at Fork this time of year is that the big fish out deep tend to show up after tournament hours when it's too late to do anything about them."

He ended up fishing extremely shallow the majority of the time, with most of his fish coming on a vibrating jig and some on a square-bill crankbait.

"They use those flats to pin shad and it's the one time of year I fish as far away from the creek channel as I can. If it hadn't gotten warm, I have no doubt I could've caught 22 to 25 pounds a day without a big fish, but the water temperature rose 10 to 12 degrees.

"When it gets cold, I think they use the wood almost like a person uses a blanket; they get tight to it. That was steadily going away and the only thing I had going was they were coming to me on the flats."

> He threw the crankbait, a metal-billed prototype made by a Band of Anglers (sexy shad), on the same setup.