Klinger Is 'The Man' At Mead Right Now 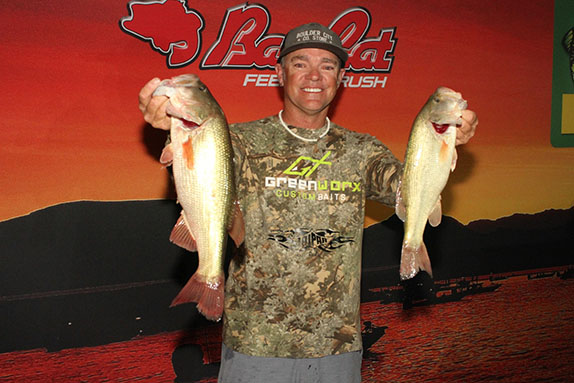 Tim Klinger weighed double-digit bags on each of the final 2 days en route to winning the WON Bass U.S. Open.

Tim Klinger doesn't fish Lake Mead all that much despite living in close proximity to it. But put a big-money tournament on the massive Nevada impoundment and it seems as if he can't be beaten right now.

The Boulder City, Nev. resident and two-time FLW Tour winner captured his first WON Bass U.S. Open title recently by catching double-digit limits on each of the final 2 days. Such a feat is always a tall order at Mead, which is home to fewer bass per square mile that just about any major venue in the country. Throw in the often-harsh desert conditions and you have the rationale for why many believe the U.S. Open, year in and year out, is the sport's most grueling event.

The victory was his second straight on the lake – in 2019 he won the Western Toyota Series derby by an eye-popping 4 3/4-pound margin on the strength of a 15-04 bag in the final round.

He topped the 243-boat U.S. Open field with a 3-day total of 32.07 pounds, which included a tournament-best 13.49-pound haul on day 2. He finished a little more than 3 pounds ahead of Bass Pro Tour competitor and former U.S. Open champion Roy Hawk.

It'd Been A While

The 47-year-old Klinger, a utility maintenance worker at the Nevada National Security Site (formerly the Nevada Proving Ground) located about 65 miles from Las Vegas, hadn't launched his boat on Mead for quite some time prior to this month.

"It's crazy, he said. "I pre-fished for the Open for two days and prior to that I hadn't been out there in 6 months. I've been working a lot and I've been going to Lake Mohave (another Colorado River impoundment near the Nevada-Arizona border) a little more when I did go fishing."

He had a spectacular initial practice day – he said his biggest five fish would've combined to weigh more than 20 pounds. Things are never the same from one day to the next at Mead, however, and he never had a day that came even close to resembling that in the tournament.

In fact, he started out with a 7.66-pound bag that left him in 42nd place. His big stringer the next day, which was topped by a 5-pounder, catapulted him to 2nd and he closed out the win with a 10.92-pound effort on day 3.

He spent some time fishing the shallow grass, as many in the field did, but he did most of his damage from some old trees in the in depths of 12 to 18 feet in the northern part of the lake.

"I marked those trees back when the lake was at its lowest point," he said. "All summer the (water level) kept dropping and dropping. I thought it would be good (if the tops of the trees) were in the 12- to 15-foot range, and it was."

All 15 fish he took to the scale were largemouths. He caught one or two on a spinnerbait, but most came on a Texas rig featuring either a big worm or a craw.

"The first day I fished pretty slow and I was real methodical," he said. "The second day I actually sped it up a little and that seemed to trigger some of the bigger bites.

Klinger employed 7'6" heavy-action Taipan rods for his Texas rigs, one a flipping stick and the other a punch rod. His reels were Shimano Curados and his line was 20- or 25-pound Yamamoto Sugoi fluorocarbon. He used tungsten weights in four sizes (1/4-, 5/16-, 3/8- and 1/2-ounce) and a 4/0 Hayabusa flipping hook. The baits were an 8 1/2-inch curly-tail Berkley PowerBait Power Worm (motor oil or green-pumpkin) and a Berkley PowerBait Chigger Craw (green-pumpkin).

His spinnerbait was a 1/2-ounce Greenworx TK1 (white shad) with a nickel Colorado and gold Indiana blade.

> He qualified for the 2017 Bassmaster Classic via the B.A.S.S. Nation and finished 15th at Lake Conroe.