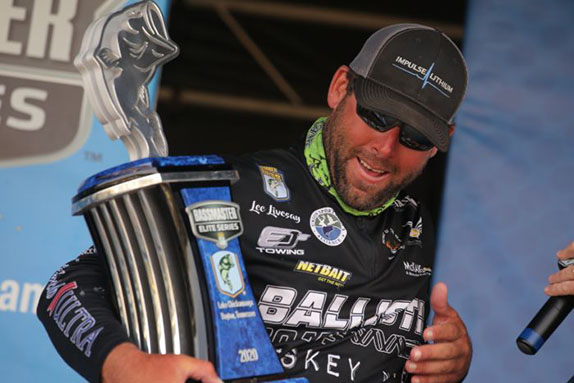 When fishing is brutally tough, having confidence in something can go a long way. It definitely did for Lee Livesay.

Like many other pros during the Bassmaster Elite Series event on Lake Chickamauga, Livesay did the majority of his damage with a frog. But while many guys would have one good frog day only to bomb the next, Livesay never faltered.

The reason for that is both how and where he was fishing that Scum Frog Launch Frog, but also the confidence he had in it to get the bites he needed.

Here’s a look at what Livesay did to come out on top in a tough-bite tournament.

Hearing pros bemoaning a stingy bite in practice is par for the course at most events. For once, though, the bleak practice reports were accurate and carried over into the event.

Yet, Livesay was not among those complaining.

“I actually got a lot of bites that first day of practice,” said Livesay, who started out tossing around a frog to see if it would pan out. “I just shook them off, and actually my big one I caught the final day I’m confident I shook off in practice because of where she was.”

On the second practice day, he decided to run up the Hiawasee River to toss a jig to bluff walls, and sure enough, he got enough bites up there to figure it would be a nice limit area. So on the final day of practice, he again dedicated himself to refining the frog pattern, figuring out the bass were a lot shallower than most would’ve thought. Plus, he found an area he thought he may have to himself.

“Dayton Boat Dock to the Highway 60 Bridge, that’s where I focused,” he said. “It was so tough, you had to keep your bait in the water the whole time. That area is where I had the most bites.

While most were forced to scramble on the first day of competition, Livesay may have had it as easy as anyone.

He started out up the river and caught three on the jig before picking up the frog to finish out his limit. But despite sitting in 10th place after the first day, he felt he had to make a change.

“I knew I could catch fish up the river, but I felt like I was laying up if I did,” he said. “The bigger fish were in the mats. So I never went back up there. I solely threw a frog the rest of the event.”

In a tough tournament, doing something even a little bit different can go a long way, and Livesay definitely was.

For starters, he focused on grass mats with less than a foot of water underneath them on island bars off the main channel; the more secluded they were, the better. His reasoning was simple.

“It’s easier for a bass to eat a frog that’s 8 inches above him than 8 feet,” said Livesay, who especially keyed on isolated mats made of algae slime within the hydrilla. “Plus, there were a lot less shad up that shallow. You had more bream-eaters up there that were getting a lot less pressure.”

Another big key was how slow and persistent he was with his movements and offerings. Figuring the fish were already tough enough to catch, he’d turn off all electronics and push-pole into a mat to be extra stealthy. Once there, he sometimes wouldn’t move an inch for hours, just making repeated casts until one finally reacted to his frog.

The final thing he did different from most was with his frog. Alternating between black, white and yellow frogs, Livesay added two 1/8-ounce tungsten weights to the baits to improve casting distance and, more importantly, to create a deeper impression in the mats and make the frog easier for fish to track.

“Those mats were thick,” he said, “and I was making long casts and working my bait fast. That extra weight helped it push down in the mat and make a bigger impression so even if they couldn’t see it, they could see the impression.”

All of this added up to plenty of bites – he figures he had 25 bites the final day – but hookups were an entirely different story.

“That’s just how the frogging game goes,” said Livesay. “They’re going to miss it a lot. So you have to be confident you’ll get enough bites that enough of them will actually eat it.”

> Main factor in his success – “Confidence. I knew the fish were there and I just had to be quiet and persistent, and I knew they would eat. Sometimes I had to make 40 casts to one little 2-foot mat and then, boom, she’d eat it.” 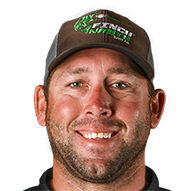