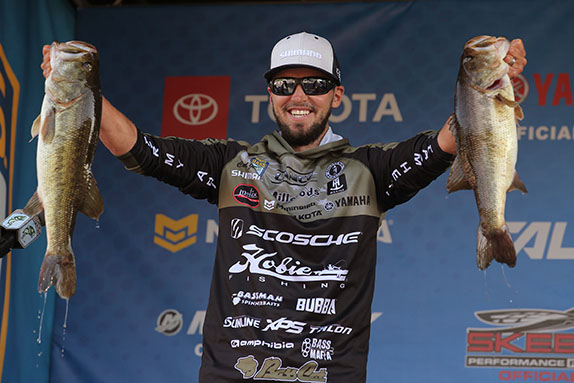 Punching mats was the primary program for Jocumsen, as well as winner Brandon Palaniuk and others who ended up in the Top 10. Pitching to cypress trees was also an effective and popular option.

Following are some pattern details for the 2nd- and 3rd-place finishers.

After struggling mightily at the beginning of the year, Jocumsen has excelled during the fall swing and the native of Australia is now in contention for his first Bassmaster Classic berth (he's up to 44th in the points standings with two events left and the Top 40 will get in). He never came close to replicating his monstrous day-1 haul and his total ended up 8 pounds shy of Palaniuk's.

He caught 15 of his 18 weigh-in fish (he had four-fish stringers on both days 3 and 4) via punching. The other three were schoolers enticed by a bladed jig on day 1.

He fished hyacinths in Jack's Creek (Lake Marion) that had duckweed blown up against them – the bass were sitting on the edge where the two types of vegetation converged. He said the depth underneath them had to be right around the 2-foot mark – there were not bites to be had if it was a foot deeper or shallower.

"The biggest key of all to getting them to bite, which I figured out during practice, was to pull the bait to the top and shake it for like 5 seconds," he said. "Instead of having to hit them on the head, that allowed them to come over and grab it.

I had two main areas and the best one was in a smaller creek that not a lot of people were fishing. It had current coming through when the wind would blow and that made a big difference."

His bladed-jig fish came from a 100-yard depression about 5 feet deep with grass that was surrounded by 2 feet of water. On a couple of occasions he was able to fire up big fish there under low-light conditions via the use of his Hydrowave unit.

"It was very close to being the winning spot, but it slowly got worse – the winning fish were in there and no one else was fishing it; nobody even came near. I just couldn't figure out how to catch them when the sun came up." 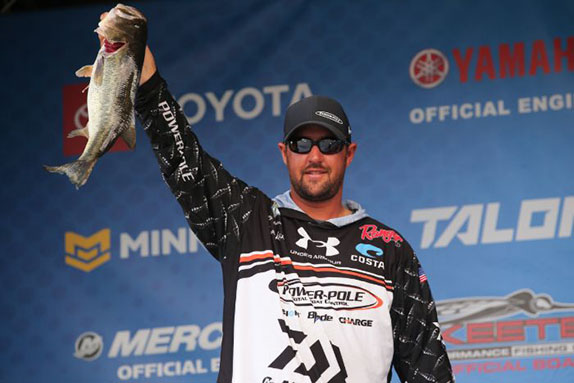 Cory Johnston began the 2020 campaign with three straight finishes in the lower half of the field, but has caught fire since the calendar turned to July. He's finished no lower than 13th in any of the past five derbies and has climbed to 2nd place (behind Clark Wendlandt) in the Angler of the Year race.

He caught about half of his fish flipping and the other half swimming a jig around cypress trees. He remained in Jack's Creek throughout the tournament.

"The fishing changed day to day," he said. "Generally, if it was sunny they'd be in the mats and if it was cloudy they'd go to the cypress trees.

"The best decision I made was after I'd found some fish in the Jack's area in practice, I knew the area was big enough that I could expand and have a good tournament in there. I didn't do any running around and I was determined to figure things out every day."

Like Jocumsen, who focused on pads that were a mix of hyacinths and duckweed.

"I was getting bit a lot of times on the second and third hop. I tied on a 25-pound fluorocarbon leader, which the fish couldn't see as good in the clear water, and I think that got me a couple of extra bites from those pressured fish.

"They were definitely in specific spots and not all mats had fish."

When fishing the cypress trees, he'd flip or cast the swim jig to the base and begin reeling.

"If they didn't hit it on the fall, sometimes they'd get it 3 or 4 feet away from the tree. The points of the islands were key to that."