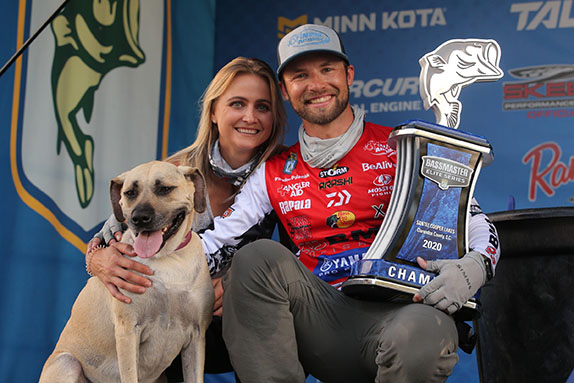 If there was any doubt about Brandon Palaniuk's versatility as a professional angler, it was dispelled with his performance at last week's Santee Cooper Lakes Bassmaster Elite Series.

The Idahoan had primarily plied offshore haunts with finesse techniques en route to his previous four victories on B.A.S.S.' top tour (including one earlier this year at Lake Champlain). Santee Cooper was his first shallows-oriented triumph and he did the bulk of his work with power-fishing tactics.

He caught nine of his 20 weigh-in fish punching mats, six on a swimbait, two on a bladed jig, two on a jerkbait and one on a dropshot rig. The dropshot fish was a 7 3/4-pound giant that served as the foundation of the massive final-day bag that carried him to an 8-pound win over runner-up and cousin-in-law Carl Jocumsen.

After the 3-day practice period, he had no inkling that another blue trophy was about to be added to his collection.

"I was hoping to somehow scrape together enough to make the cut," he said. "I didn't have a ton of bites in practice and I didn't ever feel like I was dialed in on anything.

"That was like a blessing in disguise, though. I was able to pick up little bits and pieces of clues here and there and make some adjustments without getting locked into any one thing."

Not an Easy Start

Palaniuk weighed the first of his two 20-pound-plus stringers on day 1, but it took a while for him to get into the groove. Focusing on the Jack's Creek area of Lake Marion, he started the day on a turn in a creek channel with some short grass where he'd caught a big one on a topwater bait in practice, but managed only a 1 1/2-pounder.

He made a move to the north to some mats the were exploited by a number of competitors who fared well in the event. He settled into a good rotation and got three oversized bites – a 7 1/2-pounder, a 6 and a 4.

In the midst of that flurry, he made some casts with six fish in his livewell, which resulted in a 2-pound reduction from his 23-01 raw weight.

He went straight to the mats on day 2 and boxed another solid stringer (18-13) to take the lead for the first time. It was topped by a 6 1/4-pounder he caught no more than 30 feet away from where he'd enticed his biggest specimen the previous day.

Day 3 forced the field to contend with 25-mph winds and many had a difficult time. Palaniuk was among that group as his 9 1/2-pound bag was barely half of his weight from day 2.

"I got one big bite on (a swimbait) in the morning, but I lost that one. Most of my big bites were coming from punching and some guys still caught them, but you could tell by the weights that it was different. For whatever reason, the punch bite wasn't as strong."

Palaniuk had planned to start day 4 on the mats, as he'd done the previous 2 days, but had a change of heart just before take-off. 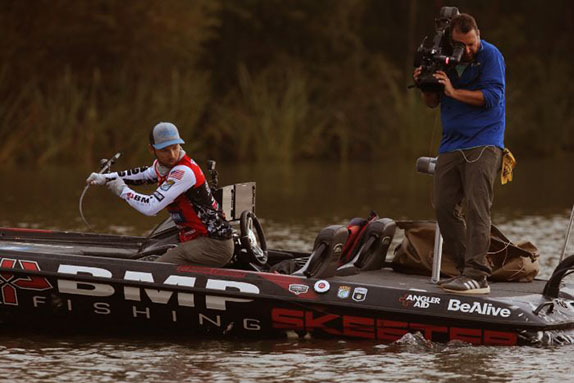 "The morning of day 4 is always quieter," he said. "There's only 10 guys and you get there earlier and get you photo and media stuff done, then you've got 25 or 30 minutes to just sit there.

"Me and Carl had talked and I was just sitting there in the boat, thinking and taking everything in. It was the warmest, most humid, low-pressure feeling we'd had and something in my mind clicked. I decided to go back to the place where I'd started on day 1 to try for one Hail Mary topwater bite. If I could catch a 6- or 7-pounder and then get four more good bites punching, I could make it interesting."

The wind of the day before had dirtied up the area and he gave up on the topwater plug after a couple of casts. He switched to a bladed jig and caught a 4-pounder and a 3, then saw a big one blow up in the middle of the channel.

He trolled in that direction and spotted a brush pile in 6 or 7 feet of water on his electronics. He let it sit unmolested for a bit while he went and fished the grass some more.

The pile would be his last stop before heading north to the mats. He tied up a dropshot rig – something he hadn't used all week, and connected with the 7-12 on his second cast. It got hung up in the brush briefly, but eventually made it to his boat still attached to the 10-pound fluorocarbon.

With three big ones in his livewell, he made a few circles around the area in search of two more, but they weren't forthcoming. He went to the mats and fished for 4 hours without a bite, then relocated to a new mat that he'd been eye-balling all week but hadn't tried. It gave him a 3 1/4-pounder and he added a 2 3/4 from a nearby brush pile on the dropshot to complete his limit.

He eventually culled the smaller one with a 4 1/4 from his "magic stretch" that had surrendered the bruisers on days 1 and 2, but that proved to be overkill.

> The Fish Arrow bladed jig is a Japanese model that's no longer in production.