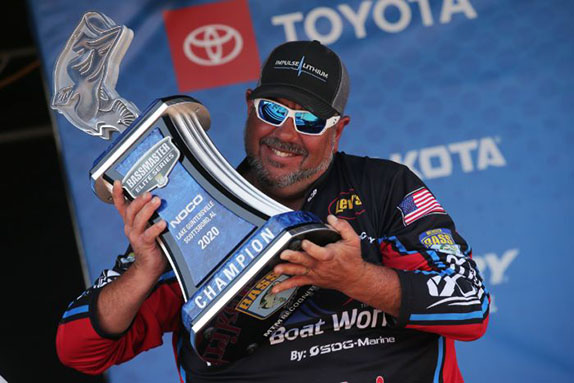 Frank Talley was thrilled that his first tour-level win came on a renowned fishery.

Frank Talley didn't have to endure any near-misses before capturing his first tour-level victory. The first time he advanced to the final day, he finished on top.

The 45-year-old Talley, known as "Frank the Tank," has endeared himself to fellow Bassmaster Elite Series anglers and tournament staffers during his 2 years on the tour. He didn't accomplish a whole lot with his rods and reels during his rookie campaign, finishing 69th out of 75 competitors in the Angler of the Year race, but has broken out in 2020 with placements in the top half of the field in five of the six events thus far.

He rose from 6th place on the final day to claim the win at Lake Guntersville in Alabama last week, catching an 18-02 sack that outweighed any other in the Top-10 field by more than 4 pounds. His 64-03 total over 4 days left him 2-04 ahead of fellow Texas resident Randy Sullivan.

"I've dreamed about this for 25 or 30 years and it's just unbelievable," Talley said a day after collecting his trophy and $100,000 winner's check. "To win on a legendary lake like Guntersville makes it even more special."

Talley said his pre-tournament practice time didn't amount to much. He caught five keepers total, with three of those coming on the first day.

He went up the Tennessee River on the afternoon of the final practice day and tried the backs of some creeks, where were fruitless. He returned to the main channel and got a couple of decent bites from eelgrass patches on the main river throwing a Strike King Thunder Cricket bladed jig.

He fished that 2-mile stretch of grass on the first competition day and came back with a 14-03 stringer that left him in 23rd place. He expanded on it on subsequent days, discovering that most of that part of the river featured the same setup, and he never fished the same place twice.

The eelgrass started at the river's edge and ran out into the channel for about 15 feet. At that juncture, the bottom dropped off from about 2 feet to 8 or so and that's where his fish were sitting.

"There were two reasons why they were there; the current, of course, and there were big schools of 6- to 8-inch gizzard shad swimming in and out.

"Almost all of the fish I caught had bellies on them. Guys on the lake were catching 4-pound heads on 2-pound bodies because they hadn't fed up. The fish where I was had so much bait that they were all butterballs. They weren't getting the same amount of pressure."

He also had a mat about 10 miles farther up the river that gave him a handful of fish enticed by a frog.

He stopped short of his usual starting destination on day 4 and it proved to be the winning move as he caught a fish that was almost 6 pounds and another almost 4 to lay the groundwork for his big bag.

"I knew in the first hour and 15 minutes that something was going on because here came the drones and the camera boats," he said. "But on my way back, I didn't think I'd done quite enough and I thought I was probably going to finish 2nd or 3rd.

"It was just a miracle day and I fished clean all week and never lost anything that hurt me, but I thought I needed one more big bite to finish the deal. I guess I was wrong."