Adding Small Weight To Frog Helps It 'Sit Down' On Mats 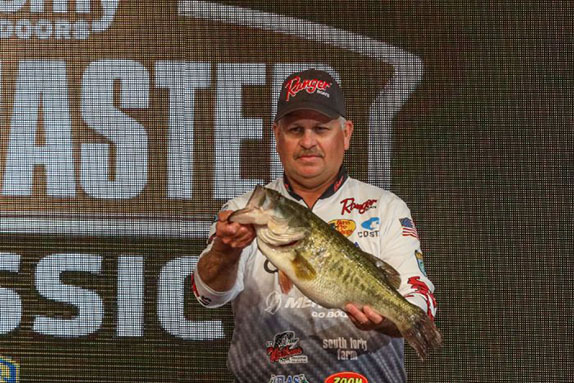 Todd Auten says that several types of objects can be inserted into hollow-body frogs to make a deeper impression on a mat.

Todd Auten expects to throw a hollow-body frog on grass mats quite a bit when the Bassmaster Elite Series resumes in 2 weeks at Lake Guntersville. Ahead of that, he offered up a tip that might help BassFans catch a few more fish while employing the sometimes exhilarating but frequently frustrating technique.

Auten often inserts a small object into the body of the frog through the hole at which one of the two hooks protrudes. It might be a bead made of glass or brass, a glass rattle or a small lead sinker.

"It gives the frog a little more weight and that results in it making a little more of an impression when it's coming across the mat," he said. "The fish feel its presence a little bit more."

Whatever the object is made of, it shouldn't be too big – about the size of a pencil eraser is the maximum.

"You don't want something bigger than that because when a fish bites, it could squeeze on that and it'll stop it from getting the hooks."

If you want to add a sound component, Auten said he's known anglers who insert the tiny bells that are found on some toddlers' shoelaces.

"Whatever's in there moves around and kind of rattles a little bit. It doesn't really affect the frog's movement because on a mat, you're not walking it anyway. It just makes it tip backward a little bit and sits it down.

"One other thing it does is when a fish knocks the frog in the air, it doesn't go as far and it lands a little bit closer to the actual strike. Sometimes that gives you a better chance that it'll come back and hit it again."

He emphasizes that the tactic should be limited to fishing mats – you don't want anything that'll induce a frog to sink when it's floating on open water.

Now for some of Auten's thoughts on fishing frogs in general:

> For solid mats, he'll throw either black or white frogs, the former in low-light conditions and the latter under the mid-day sun. If the grass is broken up a bit and the fish can get a decent look at the offering, he'll lean toward a more transluscent color, most likely green.

"I think the fish, when it's cloudy and all, seem to want something darker," he said. "I don't know if it really matters a whole lot on mats, but that's just what I've found over the years of fishing them."

> He uses a lot of solid-body frogs with kicking legs as well, particularly on broken mats or open-water situations when he's doing more winding than pulling.

> His preferred gear setup includes a 7'7" G. Loomis IMX Pro 915C umbrella-rig rod, a Shimano Curado K casting reel (7.4:1 ratio) and 65-pound PowerPro braided line. "G.Loomis makes a frog rod, but this one's a little stiffer and it's got a little more (action in the) tip. With that little bit of tip, when I do get it in open water I can work it a little better."

> Persistence sometimes pays off if the action is slow. "If you can get five bites on a frog and get 'em in the boat, they're usually pretty good ones. A lot of times the problem with frog fishing is finding a group of fish and keeping them to yourself." 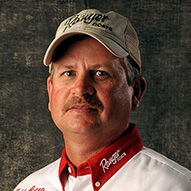