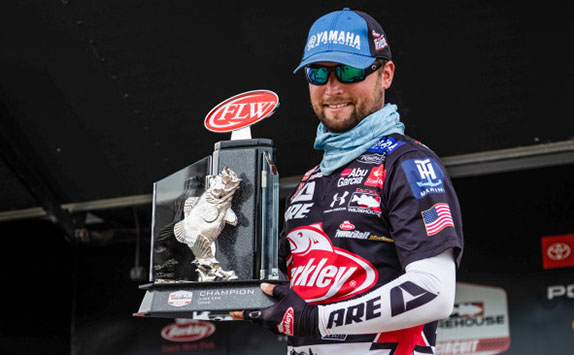 Justin Lucas' tour-level wins in consecutive months both occurred on northern smallmouth fisheries, but the tenor of the events wasn't even remotely similar. For example, he caught far more 2-pound-plus bronzebacks on his first day of competition in the Bass Pro Tour regular-season finale at Sturgeon Bay (50) than he did over 4 days at the Lake Erie FLW Pro Circuit Super Tournament (fewer than 30).

"This one was totally different," he said. "The fish were set up in their summertime places and they were way out in the lake. The ones at Sturgeon Bay were just moving off they beds and they were a lot closer to the bank."

One similarity was he caught every fish in both events on a Berkley MaxScent Flat Worm attached to a dropshot rig.

"The biggest thing for me (at Erie) was not being afraid to leave spots where I thought I should catch them or that I thought would be good. I kept and open mind all week and hit new stuff every day. It was really free-flowing and it was a good feeling.

"I feel like I know how to catch those fish once I've figured out where they are."

With a 79-02 total, he finished a single ounce ahead of Jacob Wheeler and prevented the No. 1 angler in the BassFan World Rankings from claiming his third top-tier victory of 2020. The $35,000 contingency bonus he picked up for running a Phoenix boat boosted his total winnings for the event to $160,000.

Lucas considered giving Lake St. Clair a try during the four-day practice period as anglers who'd been to the Michigan gem were talking about how hot the action was there. It required a punishing 90-mile run from the launch in Sandusky, Ohio to get there, however, and he opted against it for the sake of his body and his equipment.

He ventured east of Sandusky one day and caught only a single fish. He stayed much closer on the following day, fishing around the Bass Islands and other popular locales in the western portion, and found slow action but excellent size.

"The quality was good, but it was getting a lot of pressure," he said. "I thought that if I found every nook and cranny that other people were missing, I could put something together."

From that point through the conclusion of the tournament, he never ventured more than 15 miles from the entry to Sandusky Bay.

"I had a lot of things marked. Some ended up having fish (on competition days) and some didn't."

Lucas was one of three anglers who compiled sacks in excess of 21 pounds on day 1. The majority of the fish caught by that trio came from the same large shoal that was also exploited by numerous other anglers.

"I had about 30 places and my rotation was dictated by whatever I could get to (depending on what the wind was doing)," he said. "I'd run from one waypoint to the next based on proximity. 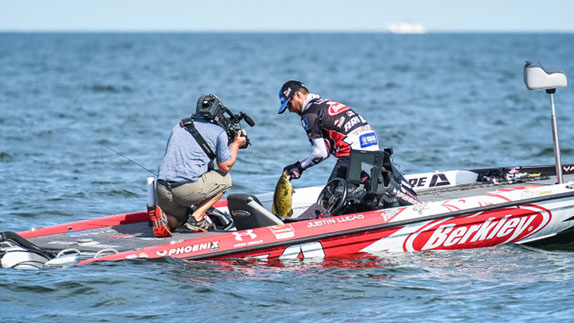 
Lucas' win was his second in 2 months on a northern smallmouth fishery.

His key depth range was 15 to 20 feet. His primary concern was getting lined up properly on the waypoints to make accurate presentations in the roiling water.

"I fished a lot of different kinds of rock – some gravel, some boulders and some places where different types of (substrates) met."

He took over the lead on day 2, but dropped back to 3rd place again the following day with his lightest sack of the event. He began the final round facing a 3 1/4-pound deficit to leader and good buddy Josh Bertrand.

The spot where he wanted to begin day 4 was blown out by the strongest winds of the week. He picked up a 4-pounder at his second stop and also farmed a couple of bites.

He eventually ended up in a place that featured a large piece of steel – perhaps an old channel marker – and some big rocks. That's where he amassed most of his winning stringer.

That locale had been his second stop on day 1, but had given him nothing on that visit.

"We didn't have an east wind for the first couple of days," he said. "Once that started and the current was coming from that side, I think that's what brought them back to it." 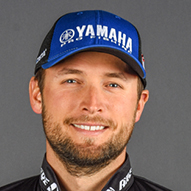