With Erie Tough, St. Clair Might Be The Place To Go 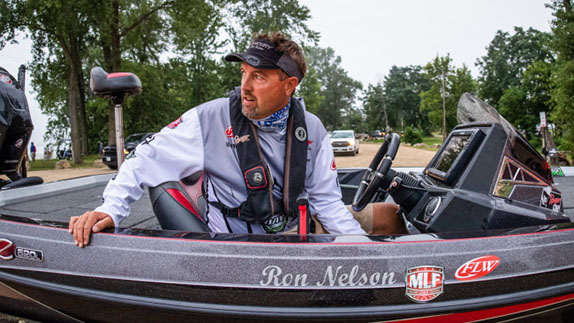 Ron Nelson enters the final event of the regular season with a massive lead in the Angler of the Year race.

Lake Erie out of Sandusky, Ohio is the host fishery for the final FLW Pro Circuit regular-season event of 2020, but it's highly likely the tournament will be won from a renowned venue in a neighboring state.

Covid-19 restrictions have closed the Canadian border to non-essential travel, which takes a lot of Erie's best options out of play. The 4-pound-plus smallmouths that'll be needed to win are scarce in the Ohio portion during August, which will prompt many in the 200-angler field to make the long, jarring run to Michigan's Lake St. Clair on each day that the weather allows.

For those who pick that option, the journey will be 90 miles each way. With any significant wind, the trip could take upward of 3 hours, which would leave only a couple hours of fishing time. That might be sufficient to compile a 20-pound bag, but not all who try it will make it back for check-in time with all of their equipment intact.

The smallmouth bite near Sandusky should be good for an hour or so in the morning, but will probably shut down during the mid-day hours. Competitors who stay close to the launch will also have some decent largemouth fishing available and could easily make the money cut (100th place) or perhaps advance to day 3 (Top 50 after 2 days) exclusively with green fish.

The Angler of the Year title and the 50 berths for the TITLE championship later this month at Michigan's Sturgeon Bay will be determined (click here to see the points standings). Ron Nelson comes in with a 73-point bulge in the AOY race and said last week that he won't take an entirely conservative approach, but will ensure that he makes his check-in time each day to avoid weight disqualification.

The event is the last of the three "super tournaments" featuring the full Pro Circuit field, plus about 50 competitors from the Bass Pro Tour. Jacob Wheeler has taken the most advantage of the additional opportunities with a victory and a 2nd-place finish (and $160,000 earned) in the two that have been contested thus far.

Before going deeper into the bite, he's some more info on the fishery.

Michael Simonton, a former Bassmaster Elite Series pro who operates a guide service on Erie, doesn't expect to see a lot of big bags of smallmouth coming from the host lake this week.

"The water's clearer than it's been for years and that definitely helps the fishing, but with Canada being closed because of Covid, this is probably the worst time of year to be here," he said. "The Ohio section won't shine.

"There's some resident fish that stay all summer, but the bigger schools that you're looking for have moved over the border looking for stronger current. If Canada was open you'd see a lot more guys staying in Erie and probably 90 percent of them would be going to Canada."

Simonton said that if anglers plan to catch smallmouth on Erie, they'd best get it done quickly.

"In my experience at this time of year, they'll keep you busy for the first hour and a half of the morning, then it shuts off like a light switch at about 9 o'clock. I've dropped cameras in spots and you can see bass down there – not huge ones, but 2- to 3-pound fish – and you just can't get them to bite.

"I don't think you're going to see guys catching 10 to 20 fish to work their way up to 15 pounds. For the majority of the field, it's going to be a huge relief when they catch their fifth fish."

Fishing only for prize money and with no points at stake, a lot of the BPT entrants will probably be willing to risk the run to St. Clair. The preliminary weather forecast at least looks amenable for it, but there's never a guarantee that such a gamble will pay off.

"It's almost 60 miles to the mouth of the (Detroit) River and another 15 from there to the south shore of St. Clair, so you're talking 75 to 90 miles depending where on St. Clair guys are going," Simonton said. "There's going to be some good camera footage and some high drama, for sure. If you've got a buddy in the same flight then maybe you can go as a team to try to make sure everybody gets back safe, but it's still a high-stakes run.

"St. Clair is just such a more diverse fishery and it's almost like springtime there year-round. There's so many ways to get bites all the time."

All is not lost for competitors who don't want to make the long run and who haven't found success with Erie smallmouth, however. Largemouth bags in the mid to high teens are there to be had.

"A largemouth-only tournament on Sunday took 16 pounds to win and two weeks before that it was 18 pounds. "Those are team tournaments, so that makes a difference, but a guy with a sneaky largemouth spot could have it all to himself."

Anglers will take off at 6:30 a.m. EDT each day from the Shelby St. Public Boat Launch in Sandusky. Daily weigh-ins will be held at the same location and will begin at 3 p.m. on Tuesday and Wednesday and 4 p.m. on Thursday and Friday.

Attendance is limited to competing anglers and essential staff only. Fans are encouraged to forgo the daily takeoffs and weigh-ins and follow the event online through the expanded four-day “FLW Live” on-the-water broadcasts and weigh-in coverage at FLWFishing.com.