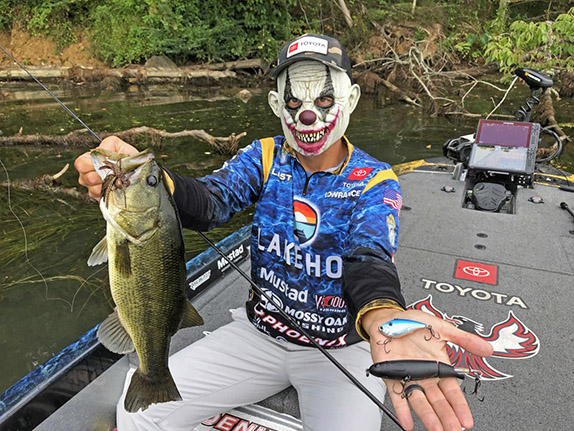 According to Brandon Lester’s mom, he hated anything in a costume as a young boy. But when it came to clowns, he loved them. “He loved being a clown at Halloween, and all his birthday parties and cakes were clown-themed too,” she smiles in reflection.

Apparently, based on the attached photo, not much has changed for the seven-time Bassmaster Classic qualifier. But with over $800,000 in tournament winnings to his credit, there’s no clowning around for Lester when he drops the trolling motor in the water. So his recommendations for which three lures to try around Halloween are wisdom-rich treats.

“Halloween kind of marks the true start of fall fishing patterns for nearly everybody in the Southern U.S.,” says Lester. “Up until about Halloween, you can still experience daytime highs way into the 80s and water temps are still warm in the low 70s, but by Halloween temps start to drop, bait starts to move shallow and bass start to chew.

“I know people get tired of hearing pros talk about shad moving to the back of creeks in the fall. But it’s a fact, and no lure takes better advantage of that annual migration than a lipless crankbait like a One Knocker,” says Lester. “But don’t just use one style of lipless. Make sure you experiment with silent ones, and standard rattles too, until you figure out what they want most.:

Lester says he and a buddy dominated an end-of-the-year championship on Center Hill Lake with a 19-pound limit around shad in less than 3 feet of water, but while the bass would not touch a traditional rattling bait, they absolutely smashed the One Knocker and silent varieties.

“Fall is topwater time!” proclaims the Tennessee pro. “But it’s all about covering water with a topwater this time of year, and a Whopper Plopper does that really well.”

Lester says autumn seems to send some areas of a lake into a funk, while others are ganged up with trick-or-treating largemouth, so he ties the size 130 Whopper Plopper to 40-pound Vicious No Fade Braid, turns the trolling motor up and covers water with the sizeable lure until he finds a pack of biters.

However, he will slow down if he encounters an isolated laydown tree. “If you find a laydown tree, that’s the juice at this time of year with a Plopper. Cast as close to it as you can and hold on, because they love to suspend on the end of those branches ambushing shad this time of year,” he says.

While Lester’s first two choices centered on faster-moving baits, he never leaves home in the fall without a jig to pitch around visible habitat. “Yeah, they may be focused primarily on shad around Halloween, but you need a tool you can use to pick apart specific pieces of shallow habitat. And for me that’s a 1/2-ounce brown jig with a green pumpkin trailer,” he says.

But what’s the scary clown eating?