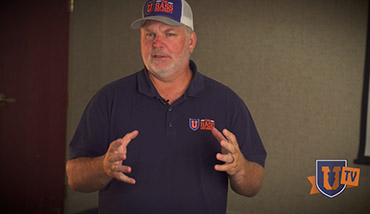 When most anglers think of fishing docks, they put jigs and various soft plastics at the top of their list of offerings. Pete Gluszek uses those as well, but he also loves to crank around piers and boathouses.

“Not a lot of people do it and that’s because it has a few complications,” he said. “It can challenge anglers as to how to effectively fish a crankbait around a dock.” That’s the disadvantage. The advantage is that you may be showing the fish something they’ve never seen. Furthermore, you can cover water quickly and trigger strikes from reluctant biters.

“All you’re really trying to do is get this crankbait about 3 or 4 feet past each piling,” he explained with respect to the roll cast. “You don’t need to cast all the way up under there.” Indeed, it’s important just to get the lure far enough past each pole to get it down to the base. He also loves to pitch because it’s a highly efficient effort allowing him to hit every single piling in short order. He’ll use his rod to impact the bait’s action, dropping it when the lure hits the water to get it down quickly, then sweeping it to the side to make contact. If your line gets caught on a splinter, “That’s not a bad thing,” he explained, because it’ll keep your lure in deflection mode. Just be sure to re-tie.

He also has a flexible rule about all of these structures: “A dock with a boat on it is better than a dock that doesn’t have a boat on it, most of the time.”

When it comes to floating docks, it’s hard to get a crankbait into the tiny openings that exist. Those are usually reserved for his skipping baits, so if he wants to crank these structures he’ll do so by casting parallel to the front or side edges. He uses his rod to control the proximity of the lure to the cover. Unlike pole docks, where he wants the lure to get to the base of the piling, when fishing a floating dock during the shad spawn he just wants the lure to get a foot or two below the pontoons.

He said that on all docks walkways are also critical targets. Too many anglers just hit the front ends and make long casts down the side, missing this critical area. “They’ll use the shade under the walkway to feed and ambush,” he explained.

His favorite rod for this technique is a 7’ medium-action Cashion Icon cranking rod, which provides maximum accuracy no matter how he’s casting his lure, whether it’s a hard-thumping squarebill like the Rapala DT Fat or a fluttering flat-side. The Wiggle Wart is another diver that he relies upon heavily. He typically pairs the rod with a Lew’s Speed Spool, usually in the 6:1 to 7:1 range, although he’ll go up to an 8:1 speed demon during the shad spawn. He pairs it most frequently with 12-pound Gamma Edge fluorocarbon, which is thin enough to allow the crankbait to wiggle naturally, but strong enough to horse a fish out from around a piling.

If you want to get more insight into how Gluszek cranks docks, including why he always uses a snap and tends to change out his round-bend trebles for EWGs, check out his full video, available only by subscribing to The Bass University TV.